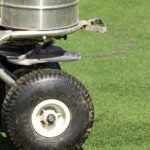 Be prepared and you won’t make a crucial mistake in your yard.

It’s as if someone spilled mustard on the Mona Lisa. The top story in turf care this week comes from the Australian Sandbelt, where management at celebrated Royal Melbourne has been in scramble mode, trying to minimize the damage from a chemical mishap.

It happened when maintenance crews applied the wrong product to half the greens on the club’s famous West Course, an Alister Mackenzie design that ranks 7th on GOLF Magazine’s list of Top 100 Courses in the World. Apparently, herbicide was inadvertently sprayed instead of fungicide on holes 6 through 14, jeopardizing putting surfaces that are renowned for their quality and artistry.

The latest word from the club is that the damage appears to be limited to the leaf blades of the turf, and not the crown or roots. But those nine greens might still need to be replaced. The club is awaiting the results from soil tests to help clarify its next steps.

They’re just usually so minor that they leave no visual trace, Fry says. Most golfers would never notice them. But if it can happen at Royal Melbourne, it can happen at any course. Not to mention to any homeowner.

In the name of precaution, we asked Fry for a basic safety checklist to help steer us clear of frequent pitfalls, along with his suggested remedies should we put a product where it doesn’t belong.

Warning: Objects in the storage shed might not be as similar as they appear

Fry recalls a story from a course in Kansas where a young maintenance worker was asked to spray the grounds with a plant-growth regulator. Little did they know that Round Up came in a container that looked very much like the product that they wanted. Whoops. The employee wound up spraying weed killer instead. Moral of the story: before you put a drop of anything on your turf, double check that you’re working with the right stuff.

See those instructions on the label? Consider them the law, and follow them to the letter, as they outline everything you need to know about how, when and where the product should be used.

On golf courses, sprayers and spreaders are calibrated regularly, usually about once a year. Whatever equipment you’re using at home, make sure it’s fine-tuned. Don’t act like Goldilocks here, testing and sampling. You want to get your amounts exactly right.

You’ve probably seen lawns with zebra stripes, the consequence of botched fertilizer jobs. This often happens when a homeowner skips a pass with a drop-spreader and fails to notice before it’s too late. As a precaution, Fry recommends setting the machine to its half-rate and working slowly so you don’t miss any spots. The extra time you spend now will save you from looking at a sad yard later.

Let’s say you’re applying a broad-leaf herbicide in the hopes of controlling dandelions. Watering the product in would be counterproductive as the herbicide would simply wash away before it had time to do its work. You get the point. It all goes back to reading — and following — the fine print. Some products call for water. Others don’t.

And if you goof up, can you make amends? It depends on the product, Fry says, and your timing. If you recognize your mistake quickly, you might be able to wash it away with targeted irrigation. But several hours later is probably too late. At which point, you’ll have to play the waiting game. “You’re hoping for some good weather that will allow for growth,” which in turn will help reveal the extent of the damage. Often, Fry says, if the damage is limited to the leaf blades, “you might not even see it after a few weeks.” But if the roots have been affected, it’s a different story. And if you’ve killed the crown, your grass is cooked. Early indications at Royal Melbourne are that most of the affected greens will be able to grow themselves back into health, though it’s possible that one or more might need to be reseeded. At this point, one of the world’s greatest clubs is playing the waiting game.