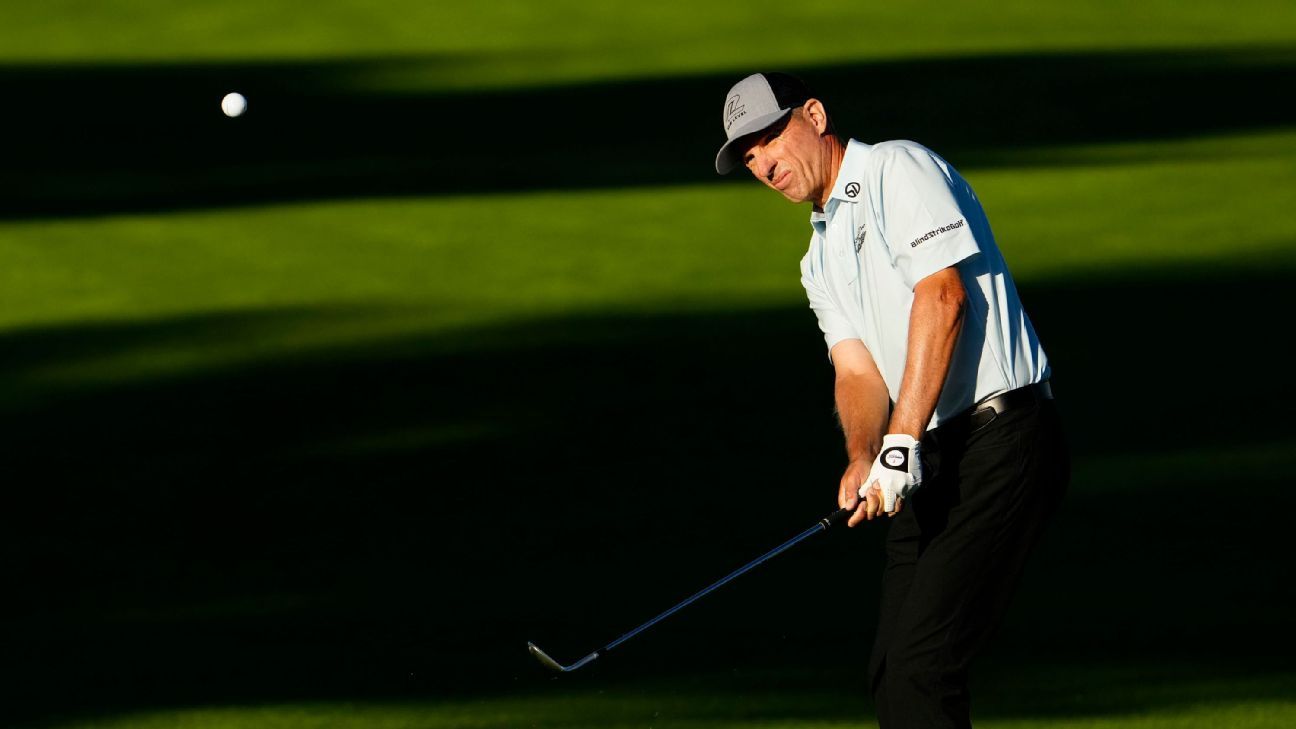 PHOENIX — Steven Alker matched Padraig Harrington‘s early birdies and kept playing steady golf, giving him a 1-shot lead over the only player who can pass him for the Charles Schwab Cup.

The Kiwi couldn’t have asked for a better start.

Alker shot a bogey-free 6-under 65 on Thursday to share the first-round lead at the season-ending Charles Schwab Cup Championship.

“I felt good today, hit some quality shots, got a few putts early,” Alker said. “I think Padraig and I kind of felt like we were feeding off each other a little bit making some birdies early. I’m pleased. One down, three to go.”

Alker has to finish no worse than fifth to win the Charles Schwab Cup and is in good position after posting six birdies at Phoenix Country Club.

The 51-year-old from New Zealand was tied with John Huston and Stephen Ames in his bid to go from journeyman to champion.

Bernhard Langer shot 66, leaving him 1 shot back as he tries to match Hale Irwin’s PGA Tour Champions record of 45 wins. Harrington also shot 66, but needs to win and have Alker finish outside the top five to win the season title.

Alker didn’t have much sustained success on the PGA Tour but played his way onto the PGA Tour Champions with a string of top-10 finishes after starting as a Monday qualifier at the Boeing Classic in August 2021. He won five times on the over-50 tour this year, has earned more than $3.3 million and leads Harrington by more than 600,000 points in the Schwab Cub standings.

Alker’s tee shot at the 354-yard 16th hole hit a sprinkler head, caroming his ball to about 40 feet short of the green. He hit to 2 feet and tried to replace his ball, but was forced to play it when Harrington protested and a rules official was called.

“I thought it was cut, but apparently it wasn’t,” Alker said. “It was just like a dimple that had come apart from the ball.”

Alker made the putt anyway and saved par with 15-foot putt on the par-4 17th. He couldn’t take advantage of the reachable par-5 18th, missing a 35-foot birdie putt.

Th 65-year-old Langer beat his age with a second-round 63 last week and went on to win the TimberTech Championship, breaking his own record as the oldest player to win on the PGA Tour Champions.

Langer finished with three straight birdies for a 4-under 32 on the front nine and hit it to 3 feet for another birdie on the par-4 12th. The age-defying German offset a bogey on No. 13 with a birdie on No. 13.

Harrington matched Alker’s birdie on No. 1 and added another on the par-3 second before dropping a shot at No. 3. Harrington hit his drive to the front of the short par-4 fifth and two-putted for birdie to turn in 2-under 34.

The 51-year-old Irishman had consecutive birdies on Nos. 11 and 12, then added another at the 13th. He hit his second shot on the par-5 18th into a greenside bunker, but couldn’t get up and down for birdie.

“I was comfortable enough with the game,” Harrington said. “Just keep doing this for another 54 holes and let’s see where it gets.”

Finau ties career low with 62 to lead at Houston