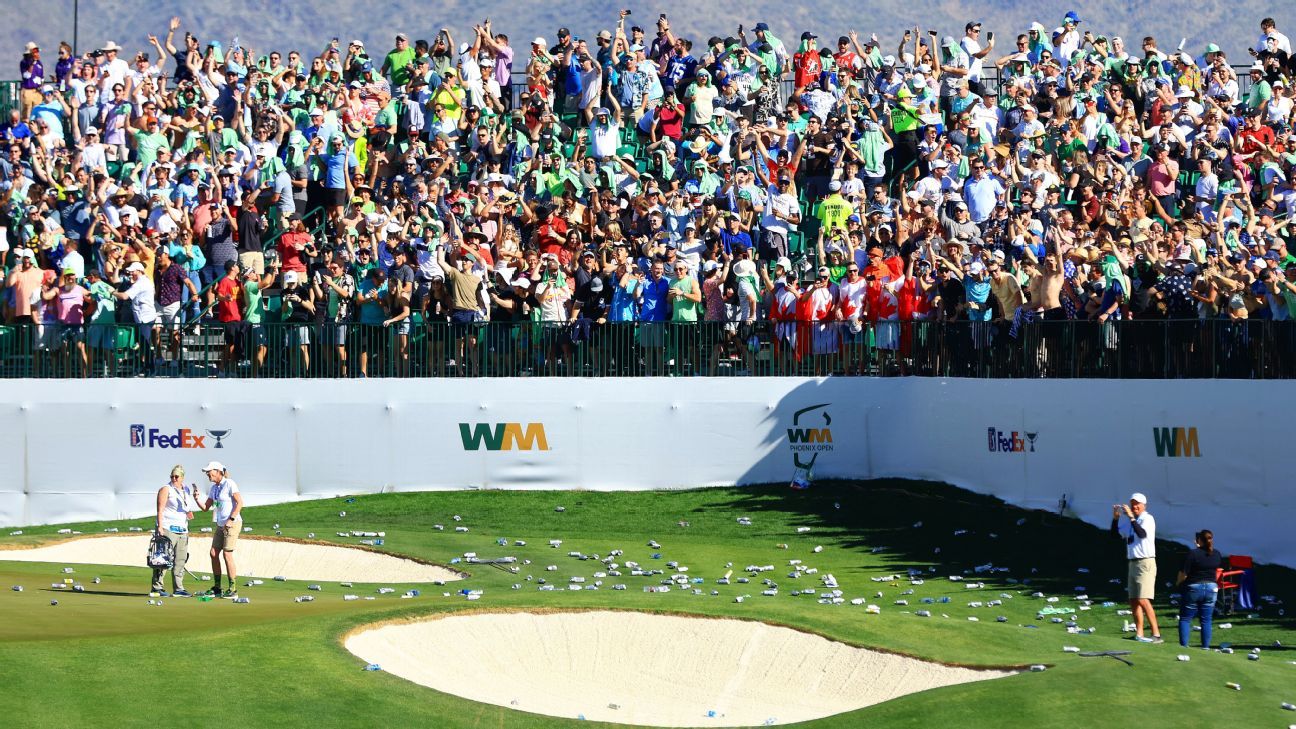 SCOTTSDALE, Ariz. — Sam Ryder watched his playing partner Chris Kirk tee off first on the iconic 16th hole at TPC Scottsdale during Saturday’s third round of the WM Phoenix Open and was able to get a good read on how the green was playing.

Then he stepped up to the par-3, which was playing 124 yards, with a 54-degree wedge and hit the shot of his professional life.

Ryder made his first hole-in-one in a PGA Tour-sanctioned event, and the celebration was what you would expect on a hole with 20,000 fans in the afternoon, with hours of imbibing behind them.

Beer cans rained down on the green, causing a delay of about 10 to 15 minutes while it was cleared so Kirk and Brian Harman could putt out. On the tee box, Ryder’s caddie jumped into his arms to kick off the celebration.

“I was looking kind of just out to the right and wanted to kind of come down around [Kirk’s] ball and maybe it was an accidental one-yard pull or something, but it didn’t look like it was moving too fast on the camera when I saw it, but in the air it just looked perfect,” Ryder said.

Even after he finished his round, the 32-year-old was still coming down from the adrenaline rush. “It was pretty crazy,” he said.

ARE YOU NOT ENTERTAINED!? ALL the drinks on me 🍻🍻🍻 pic.twitter.com/xIfIL6NLxG

It was Ryder’s first hole-in-one since a Hooters Tour event in Florida, he said after the round. Ryder thought it might have been in 2014, but, he added, that “didn’t compare to this one.”

It was the 10th hole-in-one since the Phoenix Open moved to TPC Scottsdale in 1987 and the first since Francesco Molinari‘s in 2015. It also came 25 years after Tiger Woods hit his hole-in-one at the Phoenix Open on Saturday of the 1997 tournament. The images of the fans in the bleachers tossing beer cans onto the green brought back memories of the tee box after that famous hole-in-one.

“It was honestly amazing how quickly they were able to get everything up. There was debris everywhere and, you know, it was such a fun, exciting thing and I didn’t want any kind of like negativity to kind of overshadow something that was really so much fun and happy and everything. But the crew did such a good job,” Ryder said. “How quickly they got it all cleaned up was pretty incredible. So, hat’s off to them for being able to do that and hopefully it didn’t create too much of a logjam with the pace of play, but all in all I think it was pretty positive thing.”

Ryder plans on giving the ball to his parents, who were walking with him during Saturday’s round and saw the shot in person. That almost wasn’t possible. Ryder handed the ball to his caddie, who cleaned it and started giving it back to him. Ryder told his caddie to put it in a different pocket of his golf bag, but when he did there were balls in that pocket.

They eventually figured out which was the right ball and they stashed it away for safekeeping.

Ryder’s plans to celebrate his first hole-in-one on the PGA Tour were subdued. He said he’ll buy drinks for the maintenance staff and media center but just have dinner with his parents and friends who are in town. Then he’ll rest and try to figure out what happened on the 17 other holes Saturday, when he finished at even par to remain 6 under for the tournament, leaving him tied for 29th.

“I don’t know if I’ll be making it to the Kygo concert or anything tonight,” he said.