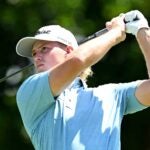 An Australian golfer, in a bizarre incident this week at the Australian PGA Championship, cut his hand while trying to pick up a stake, suffered “quite heavy bleeding” and was forced to withdraw.

Details of the incident are unclear, but Damien Jordan, according to a tweet from Golf Australia’s Jimmy Emanuel, attempted to move the stake at Royal Queensland Golf Club sometime during the first round and “sliced his hand the entire width from top to bottom. Quite heavy bleeding so off to see a doctor.” The website 7news.com.au also reported the accident, and the leaderboard on the PGA of Australia’s website shows no scores for Jordan.

Through three rounds at the Australian PGA, Jediah Morgan holds a whopping nine-shot lead, while at the inaugural Australian WPGA Championship, which is being held simultaneously, Su Oh leads by two. Min Woo Lee, who’s won twice on the DP World Tour (the former European Tour) is 14 strokes back of Morgan.

The Australian PGA, one of the premier events in Australia, was canceled in 2020 due to Covid, and last year’s edition was postponed to this week. The previous winner, in 2019, was Adam Scott, and other past champions include Cameron Smith, last week’s Tournament of Champions winner on the PGA Tour; Harold Varner III; Greg Norman; Seve Ballesteros; and Gary Player.

Use this exercise to develop more dynamic speed in your downswing

Pro denied one type of rules relief — then cleverly asks for another, makes birdie