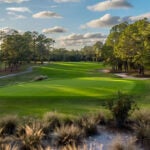 Since its 1993 opening, World Woods has been widely praised as a welcome departure for Florida golf.

From Canada to the Caribbean and now to a prized property in central-west Florida, one of the marquee names in golf development continues to expand its reach.

On Monday, Cabot — the company co-founded by Canadian businessman Ben Cowan-Dewar and Bandon Dunes developer Mike Keiser — announced its acquisition of World Woods Golf Club, a 54-hole public operation, roughly midway between Tampa and Orlando, that has long ranked among the finest public golf facilities in the Sunshine State.

Under the new ownership, World Woods will be renamed Cabot Citrus Farms and the property reimagined, with a refresh of its two 18-hole courses and a 9-hole par-3 course, all originally designed by Tom Fazio.

The purchase marks the latest headline move by Cabot, whose growing stable of destinations includes Cape Breton in Nova Scotia (home to two of GOLF’s World Top 100 Courses, Cabot Links and Cabot Cliffs) and a pair of hotly anticipated projects: Cabot Saint Lucia, set for late 2022 on the island of the same name, and Cabot Revelstoke, now in progress in British Columbia.

“I couldn’t wish for a better location for our first our first U.S. development,” Cowan-Dewar told GOLF.com. “The property is a nature-lover’s paradise.”

Since its 1993 opening, World Woods has been widely praised as a welcome departure for Florida golf, a break from the flat, manufactured design aesthetic that pervades the state. Its landscape makes you feel as if you’re somewhere else — sandy and rumpled, with palmettos and moss-draped oaks that invite comparisons to the Carolina Lowcountry. Its two 18-hole courses, Pine Barrens and Rolling Oaks, are an aptly named study in contrasts: the latter more treelined, the former more rustic, with wide fairways framed by expansive sandy wastes. While Pine Barrens has consistently been the higher-rated of the two, even creeping onto some World Top 100 rankings in the past, Rolling Oaks has been a fixture on best-in-state lists.

Minimalist in its architecture, World Woods has also long been modest in its amenities. It has no accommodations. Cabot plans to build those, along with a new clubhouse, retail, restaurants, a spa, a fitness center and a farmer’s market, among other appointments in a project that will feature a real estate component, designed to blend with the surrounds.

But first things first, Cowan-Dewar says: The initial focus is on spiffing up the golf, including the par-3 course, the putting green and the practice facilities. An architect has not been chosen yet, but that should happen within the next 60 days for work that the Cabot team regards as more of a refresher than a major overhaul.

“This is really the embodiment of the fact that great land allows for great golf,” Cowan-Dewar says. “Our job is really just to let the land shine through.”

Compared to Cabot’s other projects, Citrus Farms will be a quicker trip from major urban centers: about 50 minutes from Tampa and 80 minutes from Orlando. It’s also the first project for the Cowan-Dewar-Keiser tandem that does not revolve around new-course construction, though that, too, is in the blueprint. In the deal, Cabot also acquired an adjacent 600-acre parcel, with plenty of room for more golf in the future.

The more immediate work begins this spring. Until then, both 18-hole courses, as well as the par-3 course and a 3-hole practice loop, will remain open.

Hitting pop-ups with your driver? Why you don't necessarily need to tee the ball lower