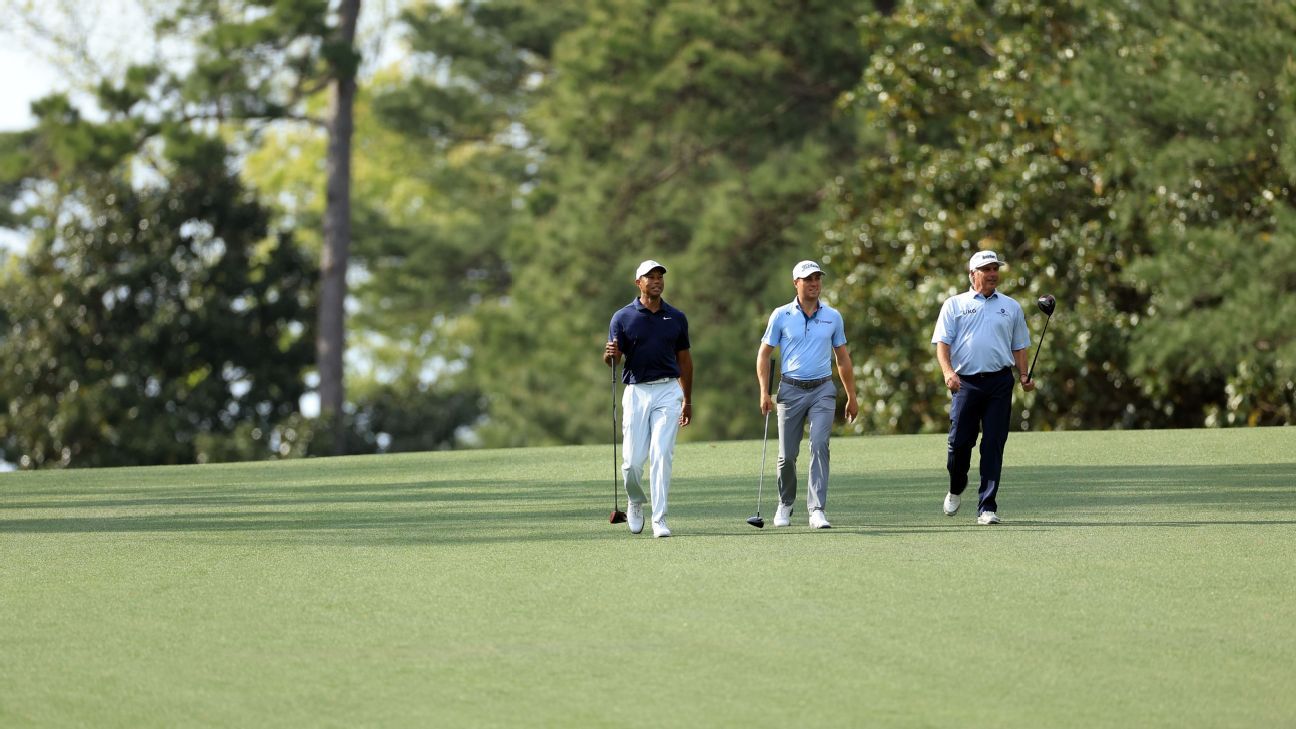 AUGUSTA, Georgia — Just after Tiger Woods made his way to the putting practice area near the first tee at Augusta National Golf Club on Monday, two security guards tried to clear a path through the patrons.

“Excuse us, a player is coming through,” one of the security guards said.

It was defending Masters champion Hideki Matsuyama — and hardly anyone noticed him among the thousands of fans surrounding the putting green and No. 1 tee box.

Woods, a five-time Masters champion, was the center of attention during Monday’s practice rounds. The 15-time major champion hasn’t played in a PGA Tour event in more than 17 months, after suffering serious injuries in a February 2021 car wreck. He told reporters in December that doctors nearly amputated his right leg.

“He’s kind of a tough guy,” Couples said. “He’s never going to let you know he’s in pain. He looked good walking. You can always be in pain, but to hit it like that, now it’s just the walking part. If he can walk around here for 72 holes, he’ll contend. He’s too good.”

Barring a setback over the next couple of days, Couples, one of Woods’ closest friends, believes Woods will play when the 86th Masters begins on Thursday.

“I hope everything keeps going Tuesday and Wednesday, and I’m sure he’s going to tee it up Thursday,” Couples said.

Golf fans are certainly excited to see Woods back on the course. When Woods hit his drive on the first hole on Monday, there were thousands of fans lining the fairway from the tee box to the green. It looked more like galleries that would be following the final groups at Augusta National on Saturday or Sunday, instead of a nine-hole practice round on Monday.

Woods, 46, hit five out of seven fairways and five of nine greens (he just missed hitting one fairway and was on the back fringe of greens on two par-3s). He didn’t seem too concerned about trying to make putts, instead taking time to read lines from different areas of the greens.

“He looked phenomenal,” Couples said. “What impressed me the most is he was bombing it. I know JT’s not the longest hitter on tour, but I know he’s damn long. He was with him, flushing it.”

Like most everyone else, Couples seems surprised that Woods is back playing at a major championship so soon after his accident. Couples said he had planned to travel to Florida to play with Woods a couple of months ago.

Couples watched the now-deleted video of Woods walking at his home course, Medalist Golf Club in Hobe Sound, Florida, more than a week ago.

“I don’t call him and say, ‘Oh, you snuck out and played and walked at the Medalist,'” Couples said. “That’s not how we work. I love him as one of my best friends, and I want to damn keep it that way. I don’t pry into anything he does. Most of the texts were about his kids. Charlie got fitted for new clubs, his daughter’s [World Golf Hall of Fame] speech and his daughter [Sam] playing soccer. Then all of the sudden, he said, ‘I’m going to go to Augusta.'”

On Sunday night, Couples said he got a text message from Woods inviting him to play a practice round the next day.

“I have a back issue,” Couples said. “I’ve worked on it since I was in my 30s. What he had was back issues, a few operations, and then a horrific car accident. So, he’s the first to tell you, ‘I’m lucky to be alive, lucky to be with my kids,’ and now he’s playing.

Couples, the 1992 Masters champion, isn’t the only PGA Tour player glad to see Woods back at the Masters.

“I’m happy he’s becoming healthier and able to play golf,” Brooks Koepka said. “We need him, the game needs him, everybody needs him, the fans need him — all that stuff.”

Koepka missed the cut at the 2021 Masters, about a month after he had surgery to repair a dislocated kneecap and torn ligament in his right knee.

“Look, I was in somewhat of his shoes trying last year two weeks after surgery,” Koepka said. “This place isn’t exactly an easy walk. I understand what he’s up against. It’ll be difficult. But if anybody can do it, it’s him.”

Webb Simpson, a seven-time winner on the PGA Tour, said Woods will be a contender to win a sixth green jacket if he plays this week.

“Any time anybody asks me if can Tiger contend, the answer is yes,” Simpson said. “Just an amazing will inside of him, whether he’s hurt or sick or struggling with his golf swing or whatever it is. So it’s really cool that he’s making this week the push to come back after that car wreck. I hope he tees it up Thursday.”

DeChambeau's had no luck connecting with Phil

How to bet on the Masters: Tips and tricks for Augusta National