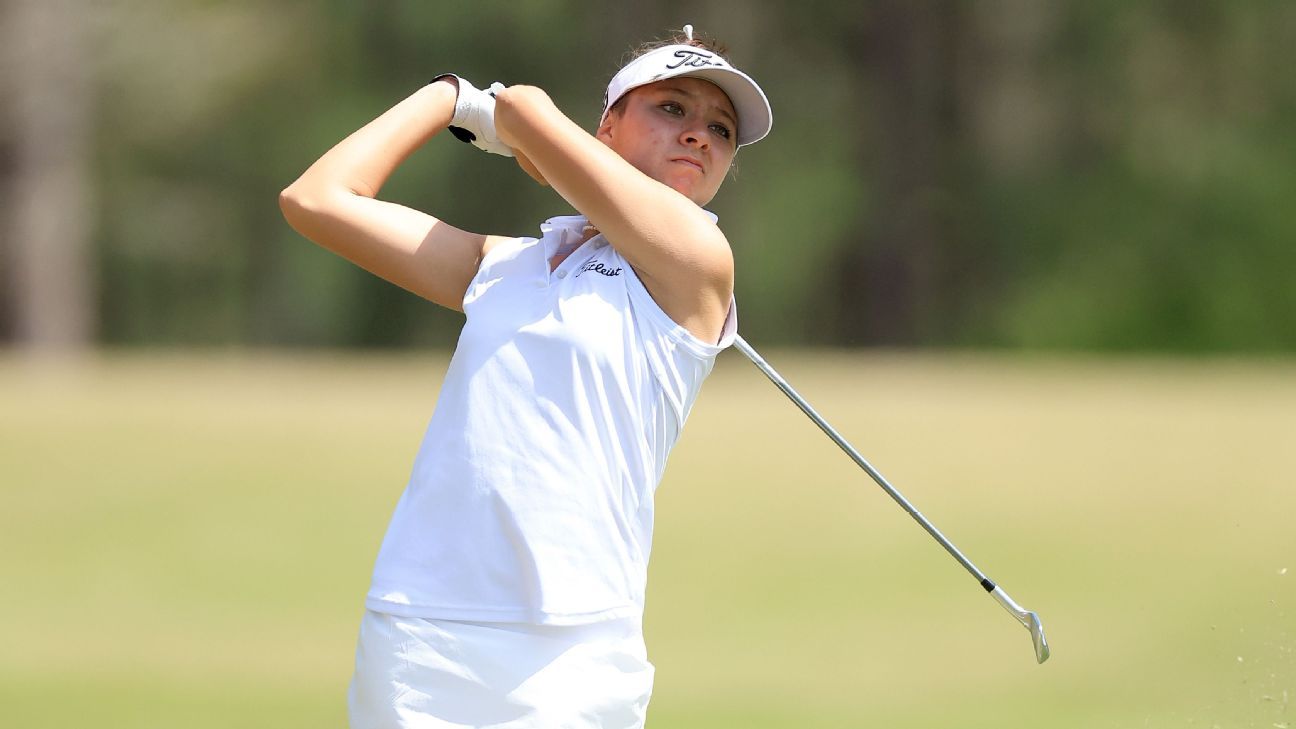 AUGUSTA, Ga. — California teen Anna Davis birdied the par-5 closing hole at Champions Retreat and shared the lead with Alabama sophomore Benedetta Moresco of Italy at 2-under 70 on a tough, windy start on Wednesday to the Augusta National Women’s Amateur.

Only five players in the elite field of amateurs from around the world managed to break par.

Rose Zhang, the No. 1 amateur in women’s golf and a leading favorite, struggled with the new greens on her way to a 76. It was a rough start, though scores were so high Zhang hardly shot herself out of the tournament. She was two shots below the cut line.

The top 30 from the 60-player field after the second round Thursday at Champions Retreat advance to the final round Saturday at Augusta National. A playoff decides the 30th spot in case of a tie

All players are allowed a practice round Friday at the home of the Masters, even if they don’t qualify for the final round.

Davis, a 16-year-old from just east of San Diego, is making her debut in the Augusta Women’s Amateur after two wins last year, including the Girls Junior PGA Championship. She was solid in tough scoring conditions, dropping her only shot on the 15th hole.

“Usually when I go to events, I know the people who are playing. And I don’t know many of the girls here,” Davis said. “I kind of feel like an underdog. There’s not as much pressure on me.”

Moresco, who missed the cut in Augusta last year, did her work on the front nine with three birdies, the last one on the par-3 eighth. She finished with 10 pars.

“I enjoy playing in the wind. I played in Europe and like all the European tournaments up in England. I had a great like training there,” Moresco said.

Michigan junior Hailey Borja, Xiaowen Yin of China and Ingrid Lindblad of Sweden were one shot behind.

Lindblad, a junior at LSU, shared the 36-hole lead with Zhang last year and finished one shot out of a playoff won by Tsubasa Kajitani of Japan.

Zhang is a former U.S. Women’s Amateur and a U.S. Junior Girls champion, a winner of four straight tournaments she played last fall. The Stanford freshman went out in 38, birdied the 10th, but then ran off four bogeys over the next six holes. She closed by making a 25-foot birdie putt on the par-5 18th.

“Today was just a little bit rough,” Zhang said. “It was hard to get my numbers right. Whenever I hit a really good shot it would be a very unlucky bounce. The greens today were tough to read for me. There’s a lot to work on.”

Zhang is among nine players who have competed every year since since the tournament began in 2019, and one of four players who have reached the final round at Augusta National each year. She wasn’t alone in her struggles.

Another was Erica Shepherd, who had two double bogeys and five bogeys in her round of 79.

Two others, Emma Spitz of UCLA and Beatrice Wallin of Florida State, each opened with a 73 and were tied for ninth.