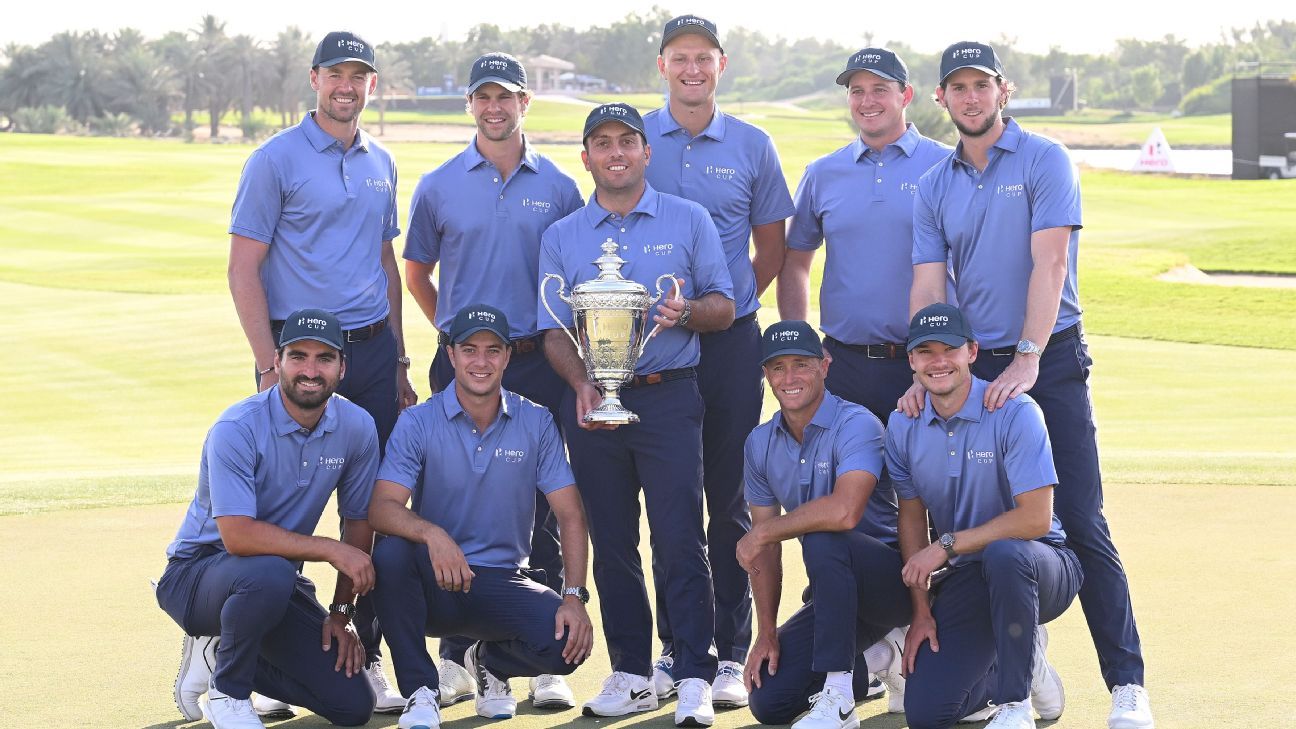 Continental Europe, led by Francesco Molinari raised aloft the Hero Cup as they beat Great Britain and Ireland in the inaugural competition on Sunday.

Now he wants back in for an even bigger team event in golf — the Ryder Cup, being held in his native Italy later this year.

“It’s a great motivation for me,” Molinari, who captained Continental Europe to a 14.5-10.5 win over Britain & Ireland, said.

“[The Ryder Cup] is a long way away, there’s a lot of golf to play and I need to focus on my game, which is much better than it has been. Being in Rome will be incredible.”

Molinari led from the front in Abu Dhabi, scoring 3.5 points for the week — tied for the most across the four sessions — and laying the platform in the Sunday singles by taking down Shane Lowry, the highest-ranked player in the event, in the first match with a 3&2 win.

Continental Europe started the day leading 8.5-6.5 and won the singles 6-4, with Adrian Meronk holing a 25-foot putt at No. 18 to claim the clinching point. It was the Polish player’s only one of the week.

The renewal of the competition — formerly called The Seve Trophy — gave European Ryder Cup captain Luke Donald a chance to assess a new generation of players, given that a number of veterans like Ian Poulter, Lee Westwood and Sergio Garcia are likely to be absent in Rome because they play in the Saudi-funded LIV Golf league.

Donald knows all about the 40-year-old Molinari, a major champion and a star of Europe’s Ryder Cup win outside Paris in 2018 when forming an inseparable and unbeatable pairing with Tommy Fleetwood.

Molinari’s form has dipped since then and he has even dropped outside the world’s top 200, but he believes he is on his way back.

Donald will have learned more about another Italian — 25-year-old Guido Migliozzi — and other younger players.

Molinari’s victory over Lowry, who finished the week with zero points, was followed by Perez beating Jordan Smith 4&2, Hojgaard having a 1-up win over Seamus Power and Migliozzi — in the last match — beating Richard Mansell 4&3.

It was Meronk’s 1-up win over Callum Shinkwin that pushed Continental Europe past 13 points — the target needed for victory.

“I would say European golf is in very good hands,” Molinari said.

MacIntyre is growing as a future star of European golf and beat Alex Noren 5&3 to finish a good week for the Scot. Fleetwood had a 3&2 win over Thomas Pieters in the second match out, then spent the rest of the afternoon at Abu Dhabi Golf Club supporting his teammates.

In the trophy ceremony, Fleetwood congratulated Continental Europe “through gritted teeth,” he said, smiling — and tried to look at the bigger picture.

“Back in September nearly two years ago, one of the first things we spoke about was the chance to play more team golf and have that opportunity,” he said.

“The passion from all of us and the competitiveness came out.”