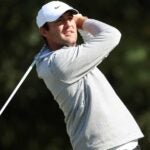 We followed Ryder Cupper Scottie Scheffler during his warm-up routine at the Hero World Challenge to see how he prepares for a round.

In the lead-up to golf tournaments, it’s customary to see some shots on TV of the game’s big names warming up on the range or the practice green. But what, exactly, are they doing when they’re off-screen? What does a top pro’s warmup really look like? What does it have in common with your own warmup? And how can you learn from it? We wanted to find out, so we tracked Scottie Scheffler’s every move before his tee time at the Hero World Challenge. This is what we saw.

10:16 a.m. — Scheffler began his routine with a series of lag putt tarts with a series of varied lag putts, hitting two balls to each hole. Speed is an absolute must if you want to keep bogeys off the card, and getting a feel for the greens before the round is a big part of that.

10:23 a.m. — Back to his warm-up routine, it’s time for Scheffler to work on his start line. He sets up a gate to putt the ball through and makes a chalk line on the green to make sure everything lines up properly.

10:31 a.m. — Now it’s off to the range. Scheffler starts by hitting his wedges and works his way up through the bag, finishing with some massive rips with the big stick.

10:39 a.m. — Scheffler is paired for this round with Sam Burns who, coincidentally, is in a matching mint-green shirt. The two get a kick out of their twinning.

10:54 a.m. — With 30 minutes of full swings behind him, Scheffler heads to the short game area to work on his chipping. He starts with an impossibly difficult chip and holes it on his second attempt. These guys are good.

11:03 a.m. — Scheffler heads back to the putting green one last time before his tee time. He works on five-footers for about 10 minutes and obsesses over the start line.

11:16 a.m. — Scheffler’s name is announced on the 1st tee. “Alright, let’s have a good day, guys!” he says. He takes a couple deep breaths, steps up to the ball and rips a driver right down the middle.