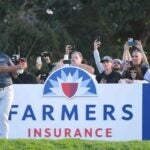 Jon Rahm hits his tee shot on the 18th hole on the South Course at Torrey Pines.

Billy Horschel slept poorly on the way back from the Sony Open two weeks ago, he tweaked his shoulder, and the Farmers Insurance Open was in doubt. “I didn’t know if I was even going to tee it up today when I woke up,” he said. “Even when I was hitting balls I still wasn’t sure whether I was going to tee it up.” Makes you wonder what a healthy Horschel could have done. Here are three things you need to know after Wednesday’s first round of the Farmers Insurance Open, played at the North and South Courses at Torrey Pines, in San Diego.

Horschel, after a few ibuprofen and work with his physio, birdied his first two holes on the North Course and nine overall and bogeyed none for a nine-under 63 and a one-shot lead over Michael Thompson. Two back are Stephan Jaeger and Kevin Tway.

Afterward, Horschel was asked: “Was it one of those then you had virtually no expectations and this kind of frees you up in some way?”

“Yes, the conditions were relatively easy,” Rahm said. “I mean, there’s not much wind, but you’ve still got to play this golf course. I think it all started off the tee. I hit it great off the tee, put myself in really good positions, and the few times I was off, for the most part I was able to give myself a chance to save the hole so I think that was the key. Nothing was really bad, I feel like everything was feeling good, everything was coming out and feeling the way it should, and it showed in the score.”

Tony Finau is four back

Among other players, Tony Finau shot a five-under 67 (as did a whopping 21 other players), Justin Thomas, Dustin Johnson and Xander Schauffele shot 68s, and Bryson DeChambeau and Brooks Koepka shot 70s.

Among the players who did not break par were defending champion Patrick Reed, who shot a 72; and Phil Mickelson, who bogeyed five holes on his back nine at the South Course and shot a 76.