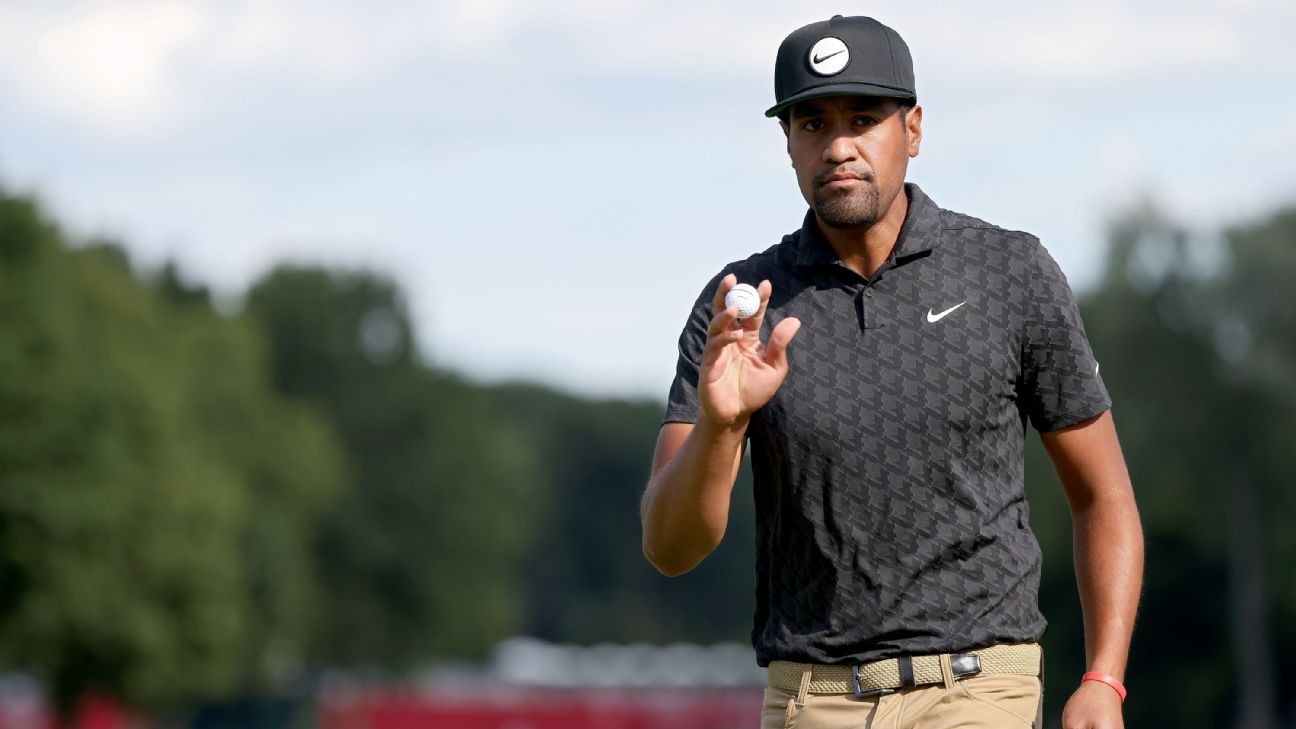 DETROIT — Tony Finau shot a 7-under 65 on Saturday to match Taylor Pendrith at 21-under 195 with a round left in the Rocket Mortgage Classic.

A stroke ahead entering the round, Pendrith birdied four of the last five holes for a 66.

Rookie of the Year front-runner Cameron Young (65) was 4 strokes back. He matched the Detroit Golf Club record with a 63 on Friday.

Stephan Jaeger was 5 shots back after a 65.

Patrick Cantlay, No. 4 in the world ranking, was 6 shots behind after a 66.

Pendrith was the second-round leader after setting the tournament 36-hole record at 15-under 129.

The duel in Detroit seemed like match play with Pendrith and Finau taking turns pulling and falling into ties and moving ahead.

Pendrith opened with 6-foot birdie putt to take a 2-shot lead. Finau pulled within a stroke on the next hole, making a 20-foot chip from the greenside rough for birdie.

Pendrith, who had his share of fans back home in Ontario, looked cool and calm as he bumped fists with two young boys as he walked to the third tee.

Finau pulled into the lead with a 15-foot putt at No. 3, then Pendrith pulled his 3-foot putt to miss an opportunity to stay ahead.

Pendrith’s errant tee shot to the left on the par-5 631-yard fourth hole put him in the No. 6 greenside rough, leaving him behind several towering trees in his path to the green. He hit a shot 104 yards to the hole, an approach within 16 feet and made the putt to restore his 1-stroke lead.

Pendrith took a 2-stroke lead at No. 6, making a 7-foot putt that curled in the right side.

Finau equaled Pendrith at 18 under at the turn after making birdies at Nos. 7 and 8 while Pendrith missed a 1-foot putt and made bogey on the ninth hole.

Pendrith ended up behind a tree again at No. 13, forcing him to chip back onto the fairway and leading to a bogey that dropped him into a second-place tie with Young.

Finau took a 2-shot cushion with an 8-foot birdie putt at 14.

Pendrith, who won twice on PGA Tour Canada, bounced back from his second bogey with three straight birdies to pull back into a tie with two holes to play.

If Finau can outlast the competition to win Sunday, he will be the first to win two straight regular-season events since Brendon Todd in 2019.