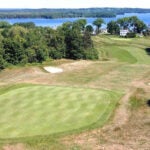 Castine, in Maine, is a rugged Willie Park Jr. nine-hole design that dates to 1921.

I. This week, in Bamberger Briefly, a quick three-parter on the abiding pleasures of nine-hole golf. Or maybe just six on your lunch break. Or seven plus a sunset chaser, ending the day with a make-your-own cross-country hole from the 8th tee to the practice green beside the carpark. Enjoy.

In Part II, join us (won’t you?) as we take a dead-of-winter field trip, GOLF.com-style, and remember a summertime visit to a backyard nine-hole course on an estate in Southampton, L.I. The driveway alone will rekindle all manner of caviar dreams.

As for this short stack of words, here in Part I, the purpose here is to take a stand for nine-hole golf, and to introduce a marketing line that any and all golf organizations are welcome to claim as we nod to the power of poor grammar:

That doesn’t mean that the vast stock of 18-hole courses should suddenly cleave off nine in the interest of the movement, one well-promoted by the PGA of America, Jack Nicklaus and scores of industrial after-work golf leagues across the Midwest.

(Actually, those leagues — shouting out here to the fellas and gals in Cleveland, in Topeka, in the Twin Cities — don’t promote nine-hole golf. They just play it, in that golden time after the virtual work whistle whistles and before the cowbell rings announcing suppertime.)

I play a lot of golf at an itty-bitty nine-holer a mile or so from my house. When the course is quiet and I play it alone, I get around in about an hour, depending on how much putting I do. I should point out that the movement has been so effective, and the course is so appealing, that I am seldom out there alone anymore. That’s OK.

For all you grass-heads (calling all Super Secrets devotees), the fairways on this course — the St. Martins course of the Philadelphia Cricket Club — are Zoysia. Zoysia has a strong blade that stands straight up and your ball sits high on it. It’s almost like playing off a driving-range mat. It’s a forgiving playing surface and ideal for beginners especially, and those carrying a collection of hybrids.

Growing up — in Patchogue, on the Great South Bay, in Suffolk County, on Long Island — my friend Larry Lodi and I would sometimes dig clams by day (lucrative, back then), eat supper at our homes and end the day at the 18-hole municipal course in Bellport, one town over. This was no-fuss golf and we played as many holes as we could, though 10 was the most common number, sometimes going double-or-nothing on the last.

Golf was not meant to be an all-day activity. For many years, in Scotland, the most common version of the game was alternate shot (Scotch foursomes), where one golfer plays the tee shot and that golfer’s partner plays the next, shortly after it comes to rest. At Prestwick and loads of other places, rounds often took less than three hours, when played this way. Along those lines, nine-hole golf tends to be less fussy, less fixated on score — and way faster.

I’m not saying that golf should be rush-rush-rush. The opposite. Golf is a break from the press and pressure of modern life, and nobody ever makes a good golf swing when rushed. But I am saying that golf can be part of your day without gobbling up most of your waking hours.

Yes, living near a nine-hole course is a big and lucky advantage, although, as many have said, to some degree you do make your own luck.

In my travels, I am sometimes on the prowl for nine-hole golf courses, especially when traveling with my wife, who doesn’t play ye olde game.

Now would be a good time to point out a charming book called The Finest Nines, by Anthony Pippi. Pippi collects 25 nine-hole courses in one place and includes the nine-holer in Edgartown, Mass., on Martha’s Vineyard. I lived near it for a couple of years and logged a lot of rounds on it. I will say what anybody would say about it: the Edgartown nine is a joyride. The starting point for nine-hole courses is often joy. I would also say that a nine-hole round on an 18-hole course tends to raise the fun-factor, too. Play whatever tee you feel like — it adds to the fun, and moves the game along.

Zac Blair, touring pro and course nut, grew up playing a nine-hole course owned by his father called Mulligans Golf & Games in South Jordan, Utah. “Even though Mulligans is nine holes, I never believed that it lacked authenticity,” Blair wrote in a foreword to Finest Nines.

You can find your own MG&G. Wawashkamo is a nine-holer on Mackinac Island, so far north in Michigan you’re practically in Canada. The nine-holer on Shelter Island, N.Y., is called Goat Hill, with a closing, semi-blind par-3 with a grass wall for a backstop. The last time I played it, I thought I might have made a hole-in-one, the shot was so pure, but I never found the ball, which means I either made an X (we all know that score) or a 10 (the highest score a local rule allows on a hole). Does anybody care? No, nobody cares.

Golf can be part of your day without gobbling up most of your waking hours.

Few people would call Goat Hill “proper golf,” whatever that means. (Proper is not a word that has served golf well.) You might call it pasture golf — it really doesn’t matter. It is primitive.

Some of you, over the years, have asked about a primal course dear to me called Auchnafree, in a remote Scottish glen. Auchnafree was laid out by a shepherd and was tended by sheep, but the shepherd is long dead and sheep have feet and move about and if it’s a course today at all I do not know. I played it as a six-holer, some 30 years ago.

But it was golf, no question about that. You had tee markers, flagsticks marking holes some distance away, a sack on your back with some clubs in it, and feet down below your knees to get you from A to B, and from the first to the second.

'He the goat': Why Deebo Samuel wore a Tiger Woods shirt under his jersey

'What the #%@! was that?' How Tiger Woods, in his rookie season, shocked this pro