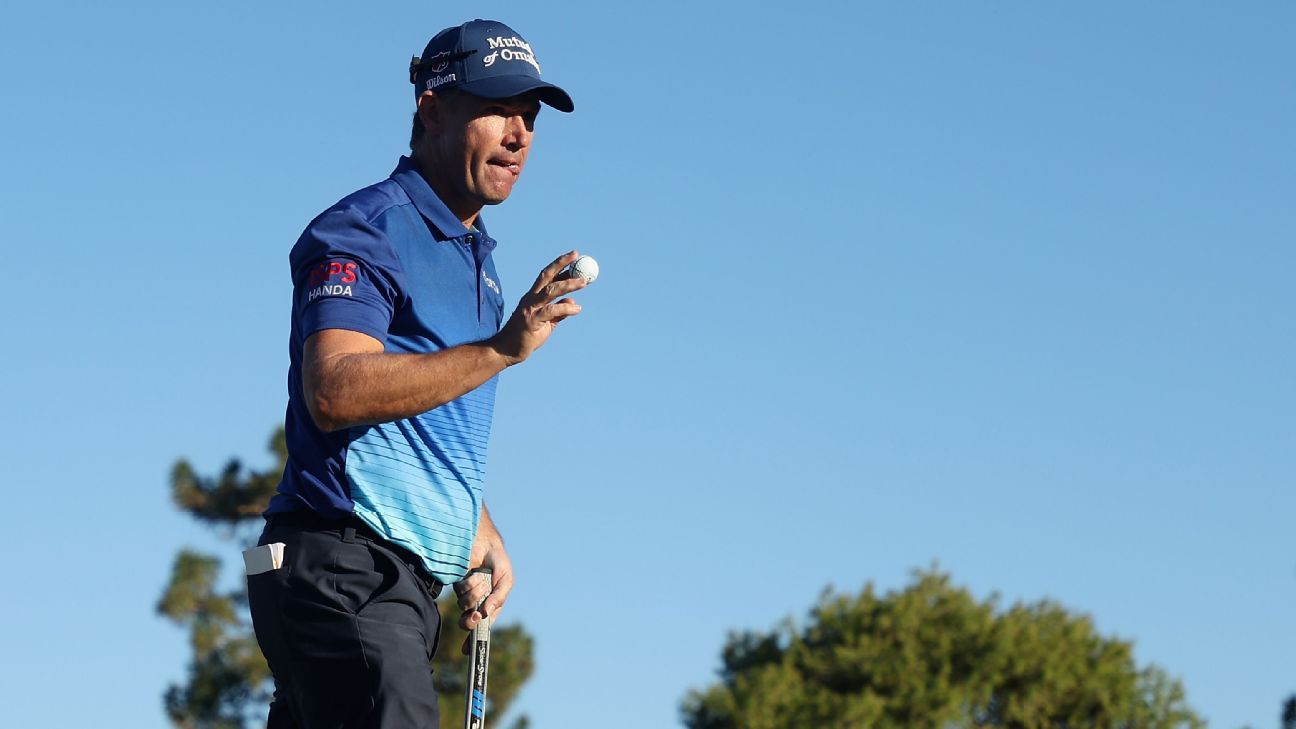 PHOENIX — Padraig Harrington spent the afternoon pouring in birdie putts and buying drinks. He will need a mix of fortunes to overtake Steven Alker for the Charles Schwab Cup.

Harrington shot a 9-under 62 to take a five-shot lead over Alker in the third round of the Charles Schwab Cup Championship on Saturday.

The two will be paired again for Sunday’s final round, with Harrington needing a victory and Alker outside the top five to win the season-long Schwab Cup.

“I’ve always been a better chaser than leader,” Harrington said. “We’ll go and see tomorrow what happens. I’ve certainly given myself a few options.”

Harrington had four straight birdies on the back nine to reach 21 under in the PGA Tour Champions finale. The run put him in such a good mood he bought drinks for fans who had been giving him a hard time on the No. 15 tee at Phoenix Country Club.

The three-time PGA Tour major winner closed his bogey-free round with a two-putt birdie on No. 18. Alker struggled to get putts to fall and shot 68, but had his third straight bogey-free round to reach 16 under, giving him some cushion in the race for the Schwab Cup.

“It’s there to take,” Alker said. “I’ve got a lot of chasing to do now to win the tournament, but yeah, get a good night’s sleep and we’ll be all right.”

Bernhard Langer‘s bid to match Hale Irwin‘s career PGA Tour Champions record of 45 wins is out of reach after a 70. He’s 8 under.

Harrington got his round off to a fantastic start, rolling in an eagle putt on the par-5 opening hole. The 51-year-old added two birdies to turn in 4-under 32 and reeled off four straight birdies starting on No. 11.

Harrington nearly drove it onto the street parallel to the par-4 14th, landing under a tree next to the chain-link fence. He slipped his approach shot under a limb and landed it for a tap-in birdie, earning kudos from a bicyclist who had stopped to watch through the fence.

Harrington did to reach 20 under.

On the next tee, Harrington had a hard time getting fans in the grandstand to move their shadows, repeatedly asking them to slide over. He hit his tee shot to 20 feet, elicited laughs with a comment and then opened his wallet, doling out $50 to the fans.

Harrington missed the putt on the par-3 15th, but two-putted for birdie on the par-5 18th for his lowest round of the season.

“I’ve been playing pretty solid all the way through and just waiting for a good day like today,” he said.

Alker played the same steady game that got him to 12 under through two rounds, but didn’t have the same magic with the putter.

He had a birdie on No. 3 and another on the par-4 12th after nearly holing his approach shot. Alker chipped it up close after hitting it through the green on No. 18 and dropped in the birdie that will keep him in the final group with Harrington for Sunday’s final round.

The rest of the afternoon was a series of near misses and a nifty up-and-down for par after hitting his second shot through the par-4 17th.

“Padraig kicked my [backside] today, that’s basically what happened,” Alker said. “He had a nice round, just kind of pulled away on the back nine.”

Alker is still in control of the Schwab Cup. He just needs to get a few more putts to fall to finish off his rise from PGA Tour journeyman to champion of the over-50 circuit.

Finau up 4 after bogey-free 68 at Houston Open