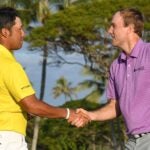 Hideki Matsuyama and Russell Henley on Sunday after their playoff at the Sony Open.

There didn’t need to be a playoff.

Of course, there was — that’s why they’re out there, right? — but as Hideki Matsuyama and Russell Henley played their playoff on Sunday after finishing four rounds at the Sony Open tied, and Matsuyama pulled away, and Henley sunk, a rarely used rule that could have ended things at any point could have become more and more a consideration.

Here’s how. The playoff began with Henley hitting a tee shot into a fairway bunker on the par-5 18th at Waialae Country Club, and Matsuyama finding the fairway. From there, Henley laid up short of the green, and Matsuyama hit the shot of the tournament, a 270-yard 3-wood that dropped within 2 feet of the hole. Henley would now have to hole out, from 84 yards away, in order to force Matsuyama to make his putt and continue the playoff. It wasn’t over, but it was close.

And then closer still. Henley airmailed his wedge over the green, and he would now have to hole that, and have Matsuyama two-putt from 2 feet, to keep things going. At that point, on the Golf Channel broadcast, analyst and longtime caddie John Wood said he asked PGA Tour rules official Gary Young whether Matsuyama and Henley could play out of turn — essentially, could Matsuyama just hit his 2-footer and claim his prize.

And they did. Henley chipped on and two-putted for a bogey six, and Matsuyama rolled in the near-tap-in for an eagle three. But, according to Rule 7A (1), under the Committee Procedures section, Henley, or Matsuyama for that matter, could have tapped out at any point. The rule states: “In a stroke-play play-off between two players, if one of them is disqualified or concedes defeat, it is not necessary for the other player to complete the play-off hole or holes to be declared the winner.”

As for the order of play that Wood asked about, the Rules of Golf also cover that. Rule 6.4b states: “The ball that is farthest from the hole should be played first. If two or more balls are the same distance from the hole or their relative distances are not known, the ball to be played first should be decided by agreement or by using a random method. There is no penalty if a player plays out of turn, except that if two or more players agree to play out of turn to give one of them an advantage, each of them gets the general penalty (two penalty strokes).”

Afterward, Henley was asked how he would “process just falling short.” He had entered Sunday’s final round with the sixth 54-hole lead in his career, and left sitting at converting just one of those into a victory. (Notably, it was in his first-ever Tour start, at the 2013 Sony.)

“It stings,” said Henley, who’s won three times on Tour. “I played some great golf. I feel like I was in it the entire time mentally this time. I didn’t have too many mental lapses like I have other tournaments where I’ve been close to the lead in the last couple years.

“So feel like I was there. You know, just got to keep chugging.”

Rogers Report: A PGA Tour wedding, a football-golf crossover and a golf Twitter war for the ages

Big shots: Abraham Ancer and Mark Wahlberg teamed up in the tequila business — and are having a blast