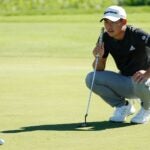 Collin Morikawa lines up a putt on Saturday on the 4th hole on the Plantation Course at Kapalua.

To Collin Morikawa’s defense, he was 81 feet away. The PGA Tour Live graphic even estimated that there was just about a 30 percent chance of not two-putting from here.

But then he rolled it on the 8th hole on the Plantation Course at Kapalua, he missed by over 20 feet to the right of the hole, and a former pro and a longtime analyst gave it another, slightly more rare estimation.

“That is a total misread,” Billy Kratzert said on PGA Tour Live’s broadcast of Saturday’s third round of the Tournament of Champions.

“I can’t even tell you — you may see that twice a year a misread like that.”

To the two-time major champion’s defense again, Morikawa did have the distance right — he was 20 feet directly to the right of the cup. And he accurately had been trying to catch a slope near the middle of the green that would have fed his ball left and toward the cup. But he missed it, and his ball sailed, sailed, sailed away.

“Oh my,” announcer John Swantek said on the broadcast.

Indeed. From there, from officially 21 feet, 5 inches away, Morikawa hit his left-to-right par putt just to the right of the hole, and he tapped in for a bogey four. On his way up from picking his ball up from the hole, he tossed it to caddie J.J. Jakovic in one motion and walked off the green.

“Well, we knew it was going to be a difficult two-putt from 81 feet, but that, uh, that first putt was mysteriously bad,” Swantek said on the broadcast ahead of the par putt.

“He could have missed his line by maybe 6 or 8 inches,” Kratzert said.

“Right on the razor’s edge, wasn’t it?” Swantek said.

Phil Mickelson’s mom, dimes and one of the best promises you'll hear

Justin Thomas, after shooting one record, jokes about his first — and Tiger, the player he beat