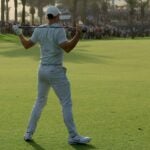 Rory McIlroy on Sunday after his second shot on the 18th hole at Emirates Golf Club.

Rory McIlroy, ahead of last week’s Abu Dhabi HSBC Championship, his first event of 2022, was asked how he would “define success” in, now, his 15th year as a pro, and the introspective question drew, as almost always from McIlroy, an introspective answer. It would be playing well, he said, and playing consistently. And it was at this point where McIlroy defined the value of “putting yourself in position to win.”

“The more time you just put yourself in position — you play good enough golf to be around the lead on the back nine on a Sunday — that’s when you really find out what you’re made of and whether you can repeat the swing and hit the shots under pressure when you need to,” he said.

“And I guess that’s a successful year to me. If I get myself in that position a lot of times, and I feel comfortable and I feel like I can hit those shots under the pressure, I know that I’m doing the right things.”

With all that in mind, perhaps the best way to unpack what unfolded Sunday in Dubai is this:

There’s still 11 months left in the year for McIlroy to get where he wants to go.

Yes, McIlroy put himself in position at the Dubai Desert Classic. He was down two entering Sunday’s final round at Emirates Golf Club. He was up one with five holes to go. And then came 17, 18 and a pair of “shots under pressure.” Did he do the “right things?” A tee shot into the bushes on the second-to-last hole, and a fairway metal into the water on the last — when all he needed was two pars to make a playoff, or one birdie to win — suggest he was very wrong.

Let’s look at both holes and shots. On 17, a 359-yard, par-4 dogleg right, McIlroy hit his tee shot left and into a patchy area, where he was able somehow to chop out and get up and down for a par. (Notably, on the shot from the bush, the gallery and those watching at home heard from McIlroy what they might hear from their own Sunday games: “This f*****g could go anywhere.”) Would the safe play have been a fairway finder off the tee? In hindsight, sure. But also consider that McIlroy, when he’s on, is one of golf’s better drivers, he had not taken that route in any of the previous rounds (albeit with just three pars to show for it) and Viktor Hovland, who, along with Richard Bland, was tied with McIlroy for the lead, had driven the 17th and eagled it earlier in the round.

On 18, McIlroy elected to hit a 3-wood off the tee on the 564-yard, par-5 dogleg left, found the fairway, then found the water that runs along the right side of the hole and fronts the green, after he chose to go for the green in two. From there, McIlroy recovered to give himself a look at the playoff on a 15-footer, but missed. Some big questions here, too. Was the 3-wood the right play? A driver flirts with the water, so it works. But why try to get home in two? Before we go further, note that McIlroy did not talk to reporters, so we’ll have to wait to fully know his reasoning. But in two of the three previous rounds, he took the risky play, including during Saturday’s third round, when he birdied. (Though, in his other attempt, during Thursday’s first round, he was also wet, and in the one round he played it safe, on Friday, he birdied.) Also, Hovland had went for it on Sunday, too (and birdied), and, memorably, Colin Montgomerie did so in 1996 with a driver off the deck. And, bluntly, it was a hero shot. Of course, nothing would be more iconic than stuffing a wedge to a foot on a third shot and winning.

So where does that leave things? Looking back, that’s now a second late meltdown over his past four events — the final round at the DP World Tour Championship, also in Dubai, featured both a Sunday 74 and a shirt rip afterward. And that follows a host of other collapses, which while excusable for some, are not so much someone as dynamic as McIlroy. Of course, to paraphrase McIlroy himself, you can’t collapse in late-game situations if you’re not there in the first place.

And the year is still young.

“There’s so many ebbs and flows in this game and the career is so long that it’s sort of hard to compare one year to the next and how you’re feeling and how you’re hitting it,” McIlroy said Friday. “But I think looking back on my last 12, 14 years or whatever it’s been, the body of work is there, and I’ve played well and I haven’t felt so good and I played poorly when I felt really good.

“It’s just a matter of keep showing up each and every day and try to putt the lowest score possible on the scorecard and move on.”