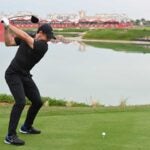 Rory Mcilroy hits his tee shot on Thursday on the 18th hole at the Yas Links Golf Course.

Rory McIlroy, on his way to winning the Wells Fargo Championship last May, made one of those on-your-way-to-winning decisions. His drive on the tournament’s final hole had skipped left and into a penalty area, but, on the advice of his caddie, Harry Diamond, instead of trying a swing from an awkward sidehill lie, with water a few feet away, McIlroy took a penalty stroke, dropped into a better spot and walked away with just a bogey five.

“Harry was awesome out there today, especially that decision on the last,” McIlroy said. “I was ready to get in there and try to play that with a lob wedge, and he was sort of like, ‘Let’s take a step back, let’s think about this. Where’s the best place you’re hitting your third from?’ So he sort of calmed me down and slowed me down a little bit and said, ‘Pal, let’s just think about this a little bit.’”

Let’s have some fun now. And be honest, average golfer.

The hero move? Or the unheralded one? While you think it over, McIlroy already knows the truth. In a recently released video by the instruction site Me and My Golf (which is well worth a watch above), it was his answer when co-host Piers Ward asked him the following:

What’s the most common mistake you see amateurs make?

“I think effective golf sometimes can be pretty boring, or in people’s minds, it can be pretty boring,” McIlroy said. “Playing the shot that you know you can play, or that you can pull off at least eight times out of 10. I think I see, I see amateurs so much trying to play outside of their comfort zone and trying to take on shots that they think they should hit instead of keeping the ball in play, you know, managing their games a little better and that will produce lower scores.

“And yeah, sometimes it’s fun to take on shots that you might be able to pull off, but I think it’s even more fun to just shoot better scores. You know, I think that it’s a — there’s so many other parts of the game that you can do really well at. And yeah, just managing your game a little better.”

Or, said in fewer words:

Pal, let’s just think about this a little bit.

“If I were to caddie for like an average player, I really feel like I could take five to 10 shots off a round very easily,” McIlroy said.

“That’s something we say all the time, isn’t it?” co-host Andy Proudman said. “Just by getting to make the right decisions, the right club, the right hit, the right sort of process and strategy. I’m sure a lot of guys will relate to that. Are you trying to play and put yourself in a position where you can’t really play that, hit the like if you can relate to what Rory says there.