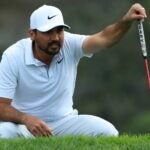 Jason Day on Friday on the 3rd hole at Torrey Pines. He and Will Zalatoris lead entering the final round of the Farmers Insurance Open.

Jason Day and the question of how are you feeling are, by now, nearly as closely associated as Day and his Australian accent, so it came as little surprise that three questions into his first press conference this week at the Farmers Insurance Open, a reporter checked in on him, again, on Friday.

“I was just telling Joaco that I feel old,” Day said of his second-round playing partner, the 23-year-old Joaquin Niemann.

“You feel old?” the reporter asked.

How’s Day feeling? In four sentences, he summed up about a decade of emotions. Unsurprisingly, he was a little reminiscent. How could he not be? You can’t forget winning 12 times on Tour, including a major, and moving to world No. 1 in the process. Nor could he look past what soon followed — a host of persistent injuries, namely to his back; and not only zero victories since his last, in May of 2018, but no seconds or thirds, either. But the hints have been there. Before he was asked his question, he had shot a 65 on the North Course at Torrey, and that had followed a respectable 70 on the South Course. And then came Saturday.

A birdie on 4 on the South. And one on 9. A bogey on 12 was followed by a bird on 13. And then this: birdie, birdie, birdie to close. And this, too: Jason Day is your leader entering Saturday’s final round, with Will Zalatoris. So naturally, it must be known:

How are you feeling, Jason?

“I feel good,” he said. “You know, it’s — how to explain it. I’ve been saying that I’ve been close for a long time, that’s what I’ve felt like I’ve been saying. It’s been a long two-and-a-bit years not really being in contention or having a good shot at winning a tournament, but I think overall I’m pretty pleased with how things are progressing swing-wise, body-wise. My putting feels like it’s kind of back thereabouts when I’m usually putting pretty decent, and that’s typically the strength of my game is putting, short game. It’s nice to be able to complement that with some good hitting as well.”

He further explained the past three years.

“A big ball of stress I would say, yeah,” Day said. “It’s just that you come from being the top of the world and then all of a sudden it kind of falls out beneath you.

“I’m just happy that — I’m obviously not still out of it, but I’m glad that I’ve given myself a chance at it tomorrow. That’s the ultimate goal is to put myself in the position where I can win tournaments. I feel like it’s been a long time. Even though I’ve had some good finishes here and there in the last three years, it’s been difficult to know that like, hey, do you want to keep pushing it, because it’s painful either way. It’s painful if I walk away, it’s painful if I keep pushing on, so I just had to kind of suck it up.

And then it did, at least for a week. Which brings us to this: How? For one, it’s Torrey, where he’s won twice before. But most notably, he says he’s healthy. No back problems, nor flare-ups to his ankle or thumb that have also pestered him in the past. And that, in turn, has allowed him to rebuild his swing.

“Well, I mean, I could — I could talk for a day, you know, about all this stuff. It’s been a long, long process,” Day said. “When we have a lot more time, I can sit down and talk to you about it.

“It’s just being really disciplined on what I need to do movement-wise and then swing-wise because the two have to co-exist. If I don’t have a really good body that moves correctly in a certain way and then I don’t marry that with good technique or technique for my body, not necessarily saying that my technique is good, but for my body, it eases everything and starts giving me confidence that you’re heading in the right direction, more of the same stuff.”

As his Friday press conference was wrapping up, he was then asked one more feeling question.

He had heard this one before, too.

“Do you feel like you’re ready to win tomorrow?” the reporter asked.

“Yeah, yeah, very much so. I’m not going to be — I can’t be overly excited about it,” Day said. “I know I’ve been, like you said, I’ve been in the position before. I just know that everyone’s going to be super pumped to be either in the final group or in and around that. I’ve just got to forget what other people are doing. If I can go out there and just play within myself, then I should be able to give myself the opportunities. I just can’t get inside my head too much. I’ve just got to go out there and be patient.”