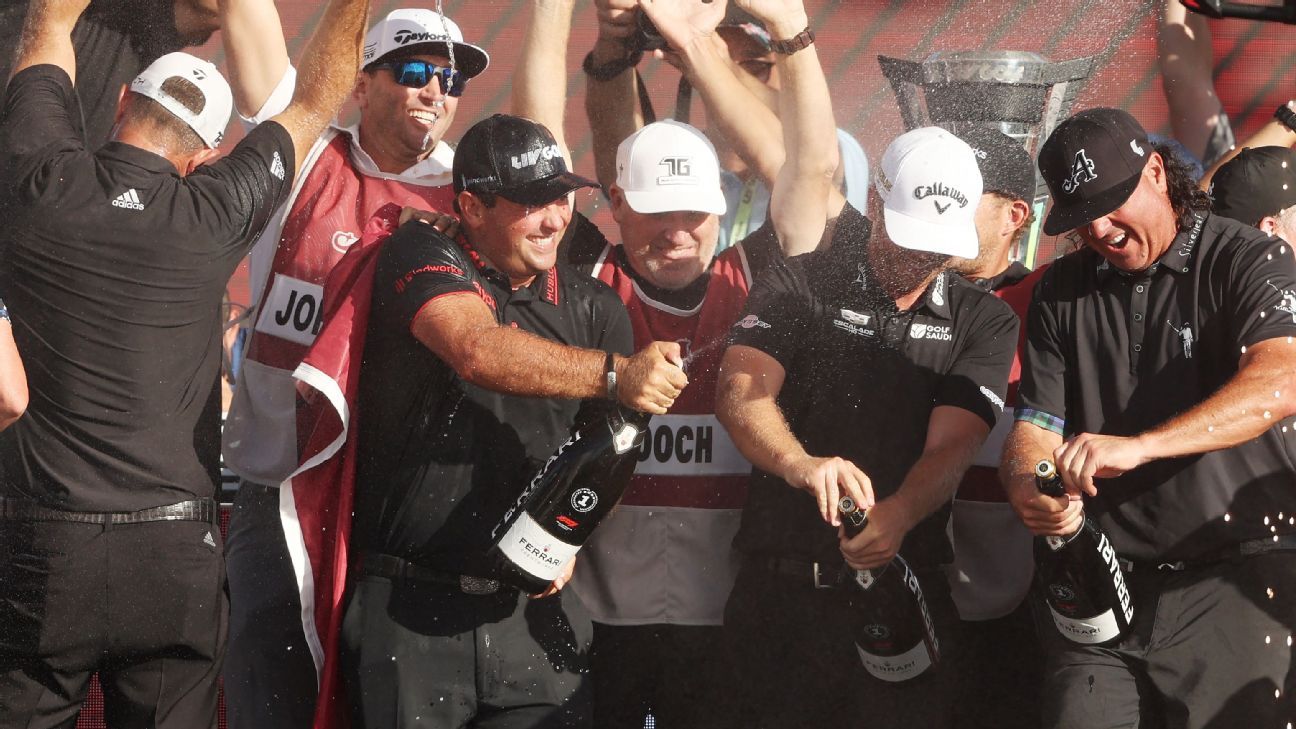 DORAL, Fla. — Dustin Johnson watched the final putt of his season roll in, pumped his right fist and waited for the party to begin.

Johnson drove the green on the 370-yard par-4 16th to set up an easy birdie that provided a bit of breathing room, Patrick Reed birdied his last hole to put their squad ahead for good and 4Aces GC captured the season-ending LIV Golf team championship at Trump National Doral on Sunday by 1 shot over Cameron Smith and Punch GC.

The victory capped a monster earnings year for Johnson, by far the biggest money winner in the first year of LIV. Including his $18 million for winning the season-long individual title, Johnson finished with $35,637,767 in earnings.

“It’s been amazing,” Johnson said. “Obviously, the fans [are] what makes it. This week’s been incredible. This whole season has gotten better and better and obviously this finale has been unbelievable.”

Reed felt even better, making birdie on his final hole to give Johnson a 1-shot lead to work with. Johnson was on the par-4 18th green in 2 when Reed finished, while Smith — the other player in Johnson’s twosome — was needing a miracle that didn’t arrive. Reed’s birdie gave his team the lead, and 2 putts from Johnson later, it was over.

Johnson wound up claiming 14% of the $255 million in purses and bonuses won by all players in LIV’s inaugural year, not including signing bonuses, which were massive and reported to be around $200 million for Phil Mickelson, and at least $100 million apiece for players like Johnson, Brooks Koepka and Bryson DeChambeau.

“Coming down the stretch here, you couldn’t draw it up any better with me and Cam battling it out to win the team championship,” Johnson said.

The payouts next year, when LIV grows from eight to 14 events, will reach $405 million. And if more players join LIV in the coming months, there will be more signing bonuses, too.

“Next year we’re going to play 14 events, plus … the majors,” Mickelson said during the LIV Golf broadcast on YouTube, doing the knock-on-wood-for-luck move before saying “the majors.” “And that’s a lot of golf. I’ve got a lot of golf coming up next year and I really want to get back to the level that I know I can play.”

The majors remain in some question since much of the qualifying process for them revolves around world rankings. For now, LIV players don’t get points toward their Official World Golf Ranking. They’ve been trying to change that.

All 16 of the players who competed Sunday finished their LIV year with more than $2 million in earnings, though most of them received much more.

Perez made just over $8 million in seven LIV events, which is more than he had in his last five years on the PGA Tour combined.

Uihlein, who never won on the PGA Tour, finished his LIV season with just over $12.5 million in seven events. That more than doubled his career earnings in 10 years as a pro.

“We’ve had a lot of headwinds,” LIV CEO and commissioner Greg Norman said on the streamed broadcast prior to the start of the final round. “We’ve weathered all the storms, and we’re here. We’ve got a great crew of people and we’ve got a great product and we’re off and running.”

Power hangs on in Bermuda for second tour title