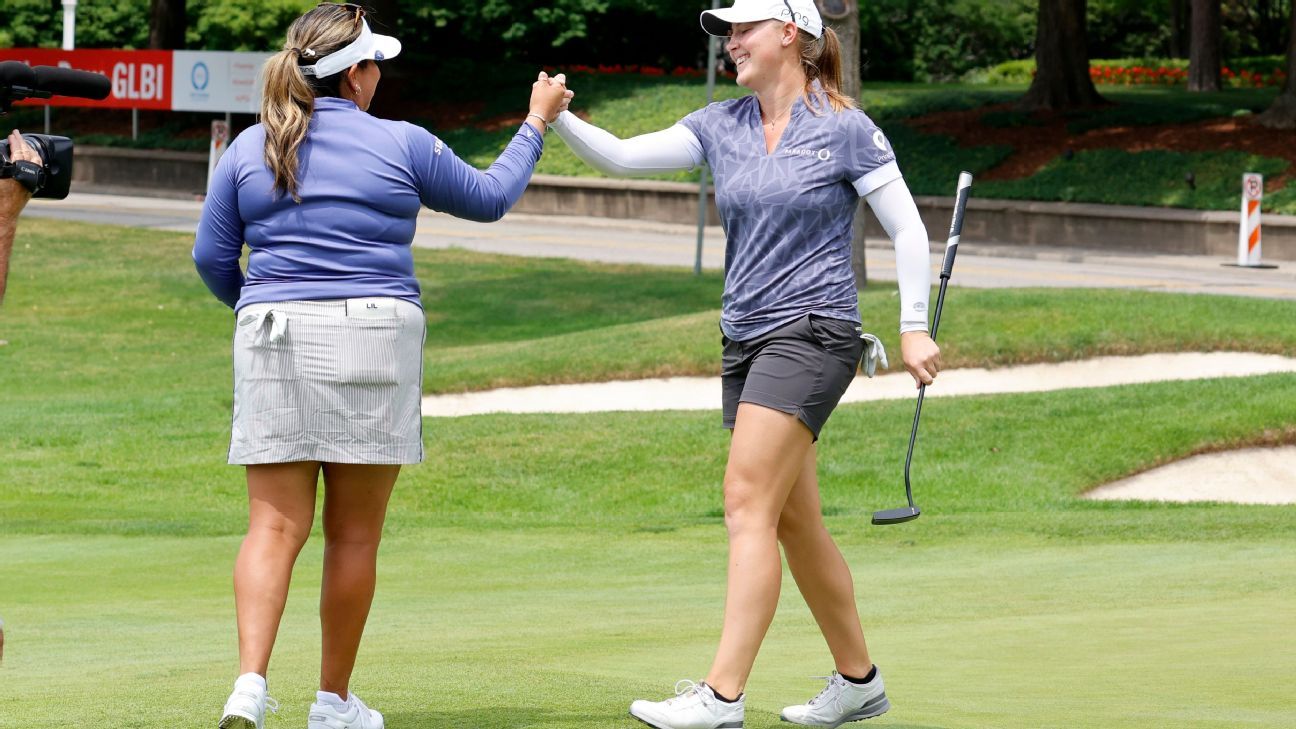 MIDLAND, Mich. — Jennifer Kupcho and Lizette Salas shot a 6-under 64 in alternate-shot play Friday to take a 4-stroke lead in the Dow Great Lakes Bay Invitational.

Kupcho and Salas had a 17-under 193 total with a better-ball round left at Midland Country Club in the LPGA Tour’s lone team event. The U.S. Solheim Cup partners birdied three of the last five holes in a bogey-free round.

“We were just out there playing,” Kupcho said. “I feel like that’s what we’re best at, is having fun together. I feel like we definitely did that today, and that’s how we were so calm in shooting that.”

Kupcho has broken through this year with her first two LPGA Tour titles, taking the major Chevron Championship in early April in the California desert and the Meijer LPGA Classic last month in Belmont, Michigan.

“She’s such a great putter and she made a bunch of clutch putts,” Salas said. “I did my job on the back side when we got into some trouble. We kind of both exchanged sorries and came out with par.”

Salas won the 2014 Kingsmill Championship for her lone tour title.

“We’ll just go out there and play our game.” Kupcho said. “I mean, there’s definitely going to be low scores, so not really dwelling on what everyone else is doing. Just go play our game and keep moving.”

Matilda Castren and Kelly Tan were second after a 67.

“I think we generally played well together,” Tan said. “We didn’t put ourselves in tough position where you have to make those pressure putts, and really just had a lot of birdie chance coming in. It was a fun day.”

Second-round leaders Pauline Roussin and Dewi Weber had a 73 to drop into a tie for third at 11 under with Tiffany Chan and Haeji Kang. Chan and Kang shot 69.

Karrie Webb and Marina Alex had a 69 to join Lim Kim-Yealimi Noh and Cheyenne Knight-Elizabeth Szokol at 10 under.

Annika Sorenstam and Madelene Sagstrom, who tied for the first-round lead, were tied for 18th at 7 under after a 72.

The 51-year-old Sorenstam is making her second LPGA Tour start of the year and only her third since retiring after the 2008 season. The Hall of Famer missed the cut in the U.S. Women’s Open last month, then tied for fourth last week in Nevada in the mostly male American Century Championship.

Tee times for the third round of The Open at St. Andrews