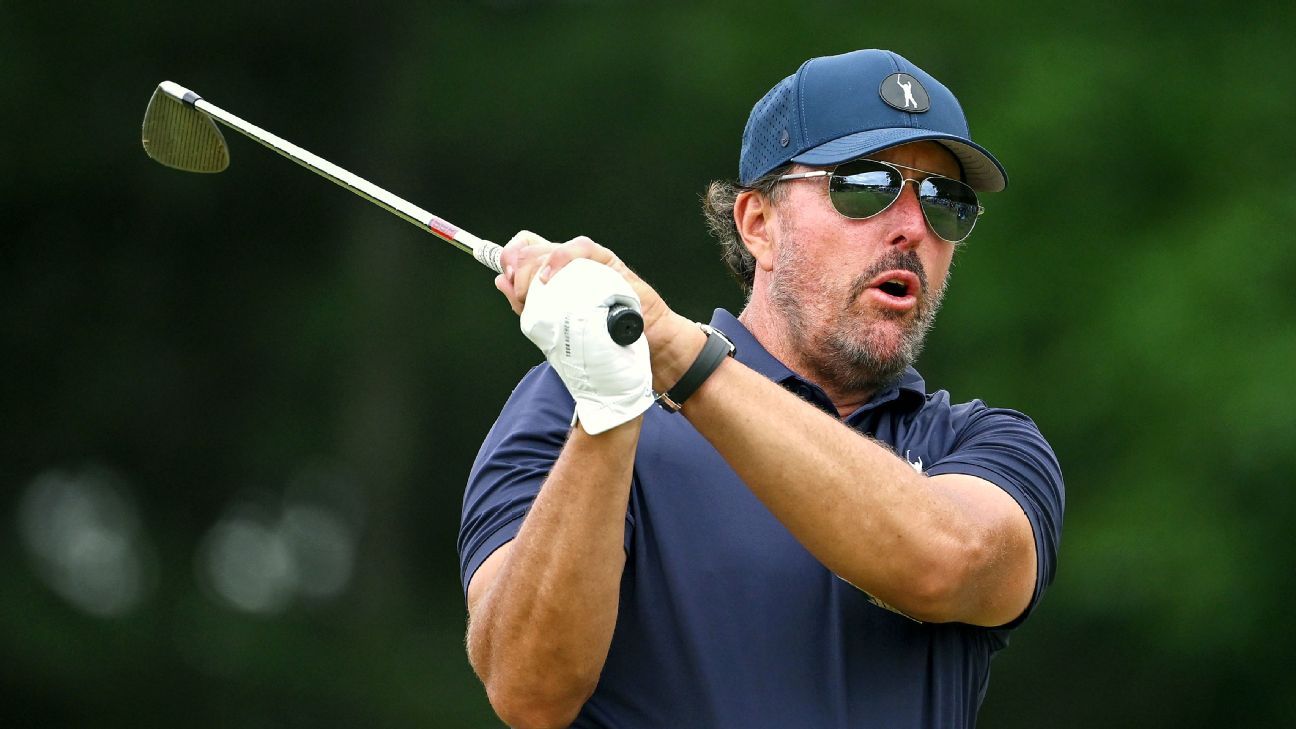 Back in Saudi Arabia for the first time since his disparaging remarks about the source of LIV Golf’s funding, Phil Mickelson said Thursday he was glad he was on the “winning side” and that he sees the PGA Tour trending downward, and he also denied doing the notorious interview with writer Alan Shipnuck.

Mickelson had said a month ago that while the PGA Tour had all the best players in the world for the past 20 to 30 years, that would never be the case again.

He came out even stronger in a news conference for the LIV Golf Invitational-Jeddah, which starts Friday at Royal Greens in King Abdullah Economic City.

“I think going forward you have to pick a side. You have to pick what side do you think is going to be successful. And I firmly believe that I’m on the winning side of how things are going to evolve and shape in the coming years for professional golf,” Mickelson said.

In an interview with Shipnuck, who published an unauthorized biography of Mickelson in May, the six-time major champion referred to the Saudis as “scary motherf—ers to get involved with.”

“We know they killed [Washington Post reporter Jamal] Khashoggi and have a horrible record on human rights. They execute people over there for being gay. Knowing all of this, why would I even consider it? Because this is a once-in-a-lifetime opportunity to reshape how the PGA Tour operates,” Mickelson is quoted as saying.

The interview was published two weeks after Mickelson played in the Saudi International at Royal Greens.

Mickelson issued a statement after the interview saying his comments were off the record and shared without context.

On Thursday he said, “I never did an interview with Alan Shipnuck. And I find that my experience with everybody associated with LIV Golf has been nothing but incredibly positive and I have the utmost respect for everybody that I’ve been involved with.”

Mickelson, Dustin Johnson, Brooks Koepka and Bryson DeChambeau were among several major champions Saudi-funded LIV Golf signed to contracts reported to be in the $125 million range.

LIV Golf currently has 12 of the top 50 players in the world ranking — British Open champion Cameron Smith at No. 2 is the highest, while the majority of them are outside the top 25 because LIV Golf hasn’t received world ranking points since it began in June.

The PGA Tour still has a majority of the current stars — 19 of the top 20 — and starts a new schedule in 2023 that will bring the best players together some 15 times a year playing for $20 million prize funds.

These are some of the changes Mickelson wanted all along. The PGA Tour has suspended him and other members who signed with LIV Golf, which is the main plaintiff in an antitrust lawsuit scheduled for a January 2024 trial.

LIV Golf has 48-man fields with no cut over 54 holes playing for $25 million each week. Dustin Johnson already has made over $30 million, including an $18 million bonus for clinching the individual points race.

Mickelson was seen as a chief recruiter for LIV Golf leader Greg Norman, and it was his comments in February that slowed the inaugural year of LIV Golf.

This summer has made clear the big divide in golf, with the PGA Tour and European tour wanting no part of anyone who has signed to play with LIV Golf.

The U.S. Open and British Open had allowed LIV Golf players to compete if they were eligible, though both organizations spoke out against the rival league. The Royal & Ancient asked Norman not to take part in the 150th anniversary celebration at St. Andrews in July.

Mickelson said golf is “very lucky” to have Saudi Arabia’s sovereign wealth fund invest in the sport. Along with enormous money paid to LIV Golf players and purses, it has invested $300 million in the Asian Tour.

“Now the United States and the U.K. are not favorable to this,” Mickelson said. “But everywhere outside in the world, LIV Golf is loved. And eventually they come around and they will be accepting of it.”

Mickelson, 52, signed with LIV Golf in June, one year after he became the oldest major winner at the 2021 PGA Championship for his sixth major title.

In six appearances with LIV Golf, he has registered only one top 10 — a tie for eighth outside Chicago, seven shots behind Smith.

He contends LIV Golf has reinvigorated him and made him excited to compete.

Fowler, Putnam lead after 2nd round of Zozo