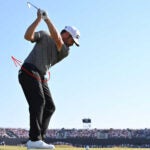 Loading your right hip on the backswing will prevent early extension on the downswing.

By now you’ve probably heard of early extension. If you haven’t, it’s a move that plagues the ranks of recreational golfers — and even many pro golfers — all across golf. Early extension is when your hips, on the downswing, move towards the golf ball, like you see me demonstrating in illustration form below.

Early extension is a divisive issue in golf. There are teachers who say it’s no cause for concern, and others who disagree. But if you’re an early extender and find it doesn’t work for you, the fix may be more straightforward than you think.

“There’s a tendency of golfers in general, and even the best guys we work with, that if they struggle to load their hips correctly on the backswing, and their right hip especially, it’s an uphill battle from there, ” Marais said. “Early extension is a natural occurrence from there.”

Early extension is an issue Oosthuizen struggles with, the pair explained, and it’s something the pair work on to improve in Louis’ swing.

“We work hard on loading into the right hip,” Parsons says.

But while turning into and loading the right hip on the backswing is a good swing thought to avoid early extension, being able to do that effectively requires improving your hip mobility and flexibility.

“One of the things I check religiously with my players is their hip alignment,” Marais says. “Human beings tend to have their hips tilt forward, which can limit their ability to load [their hips] on the backswing.”

Load into the right hip, and you create space for your hips to turn through, rather that thrust towards the ball, on the downswing.

You can watch the full video on InsideGOLF right here. 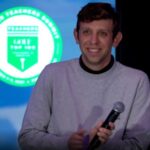 ‘It can be a waste of time’: Ryder Cupper has surprisingly relatable confession about his practice habits