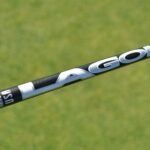 Perez spoke to DeChambeau about his experiences with graphite before making the switch.

SAN DIEGO — Graphite remains a distant second to steel in the iron market, but Bryson DeChambeau’s recent success with a full set of LAGP graphite-shafted clubs has made some of his tour colleagues stand up and take notice, Pat Perez included.

During the offseason, Perez spoke to DeChambeau about his iron setup and was intrigued by the concept of replacing his steel shafts with a product that could tighten dispersion and reduce vibrations.

“I talked to Bryson because he’s so involved in the numbers side of things in golf and thinking outside the box,” Perez told GOLF.com. “He’s the perfect guy to ask about anything in golf because he’s going to study it through and through.”

DeChambeau’s positive feedback on the LAGP iron shaft was enough to convince Perez to give it a chance before the season restarted.

“I had never hit graphite up until that point,” said Perez. “But I had them send me a 7-iron with graphite after Bryson told me a bunch about them. I was skeptical at first because steel is what I know and have trusted out here. Then I started hitting thousands of balls — no joke — with the iron and was blown away by the window it was coming out of. There were no vibrations and the dispersion was noticeably tighter.”

Following the initial round of testing, Perez had a full set delivered and installed in his PXG irons for additional work. Perez continued to see a tighter dispersion during practice rounds with a slight uptick in carry distance he admitted was an added bonus.

“After playing a thousand holes with them, I knew they were right,” Perez said. “I’m starting to see what I’m looking for. The shaft is phenomenal and I’m excited to use them.”

Outside of the iron shafts, Perez refrained from making additional changes to his set makeup during the winter break, despite the fact he parted ways with PXG at the end of 2021 to join the gear free agent ranks. Perez confirmed the split was amicable and that he still plans to use PXG clubs without an agreement in place.

“I love PXG and get along with everyone there,” Perez said. “We just couldn’t come to an agreement, but I told them I that was fine, and I was still going to play their stuff. There’s no hard feelings or bad blood. We might still do something down the line. I’ll still play 10 [PXG] clubs.”

Rules Guy: Can you switch to a lefty (or righty) swing in order to get free relief?