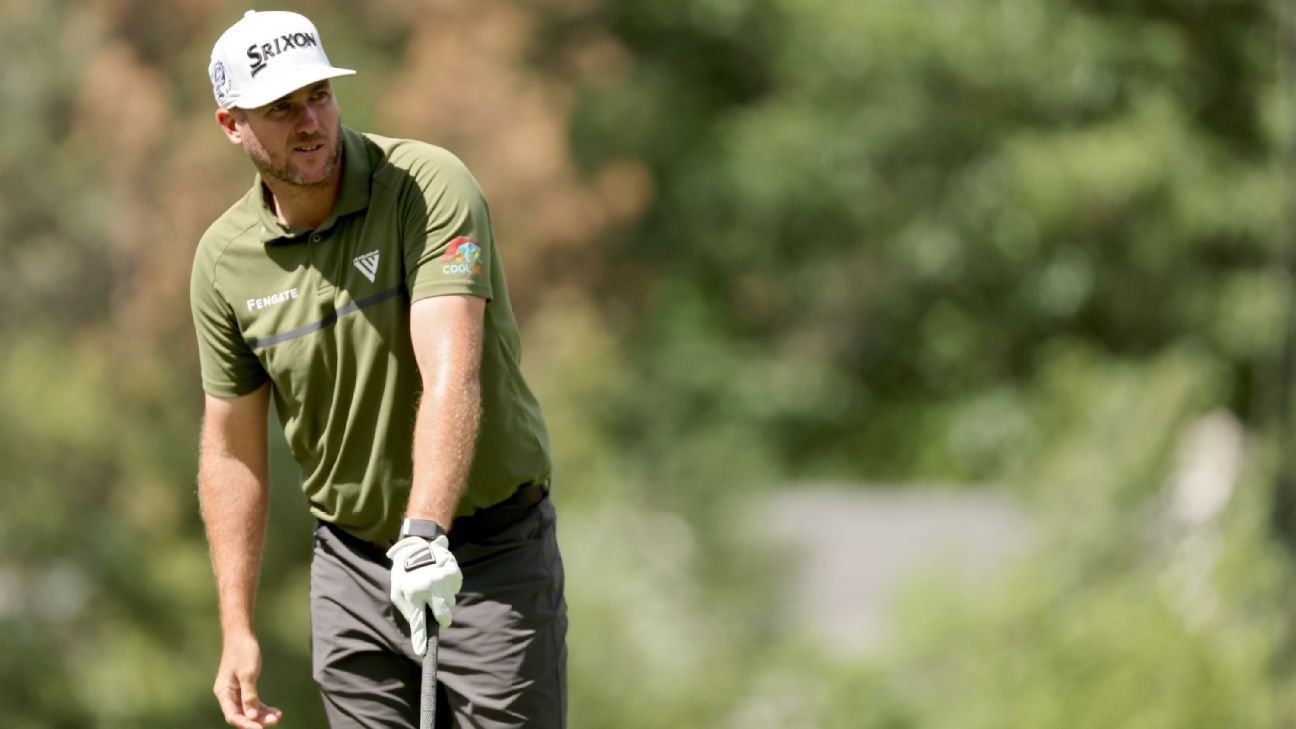 DETROIT — Taylor Pendrith grew up getting breaks from golf, putting the clubs away each winter in Canada. That may have helped him when he had to miss nearly four months of competition due to a painful injury earlier this year.

Pendrith shot a 7-under 65 on Friday to take a one-shot lead over Tony Finau into the weekend in the Rocket Mortgage Classic.

Pendrith and Finau shared the first-round lead at 8 under and will be in the final group Saturday, pairing a 31-year-old PGA Tour rookie with a 32-year-old veteran coming off his third career victory.

Pendrith is playing in his third tournament after being unable to swing a club for 12 weeks due to a broken rib, a break that reminded him of his youth.

“We have a long offseason in Canada, so I didn’t touch a club all winter basically growing up so I guess I’m kind of used to it in a way,” he said.

Pendrith said matter of factly that he can compete with the best when he’s healthy and has showed that so far at Detroit Golf Club. No one, though, has been better than Finau lately. The Salt Lake City native with Tongan-Samoan heritage is 32 under over his last 107 holes, including rallying from a five-shot deficit last Sunday in Minnesota to win the 3M Open by three shots.

Pendrith tried to pull away in the second round in Detroit, opening with four straight birdies and six in his first 10 holes. He had two birdies and a bogey over the final five holes to finish Friday alone in first.

Finau, meanwhile, started slowly with only one birdie on the front nine before carding five birdies on the back. He has a shot to be the first PGA Tour player to win two straight regular season tournaments since Brendon Todd in 2019.

“Anytime you win, you breed confidence,” Finau said. “I was just happy to carry that confidence from last week right into this week.”

Pendrith and Finau have a bit of a cushion.

Rookie Lee Hodges (66) was three shots back. PGA Tour rookie of the year front-runner Cameron Young tied a Detroit Golf Club record with a 63 for a share of fourth place and is five shots back with Russell Henley (65) and Stewart Cink (66).

Rookie Sahith Theegala (67) was another shot back in a pack that includes defending FedEx Cup champion Patrick Cantlay, who bounced back from an opening-round 70 with a 65.

Davis Love III, the 58-year-old U.S. Presidents Cup captain, was in Detroit in part to play and more importantly to get to know players better on and off the course that may represent the country in September at Quail Hollow Club in North Carolina. Love missed the cut at 5-over 149, but made the most of an opportunity to have dinner with some President Cup candidates and to play two rounds with with Young and Will Zalatoris.

Young and Zalatoris, teammates at Wake Forest and close friends, may be paired together again in two months.

“If they make the team, they’re a natural,” Love said.

Zalatoris, No. 13 in the world ranking, perhaps felt pressure playing with Love because he barely made the cut. He had to birdie his 36th hole to get to 3 under, the cut line, with a pair of lackluster rounds. If Young does not earn an automatic spot on the American team, he might be a captain’s pick.

“Cameron is trending up,” Love said. “Go back to Jordan Spieth. Nobody heard of him and next thing you know in one year he’s on the Presidents Cup team, and Cam’s headed that way, too. No one ever heard of him on the Korn Ferry and here he is, he almost won a major.”

Young had a runner-up finish at the Open Championship and at the PGA Championship. He missed a playoff by one shot. He has four second-place finishes, and was third in two tournaments. And in Detroit, Young showed Love up close what he can do.

“I would hope that I made some kind of case,” he said.