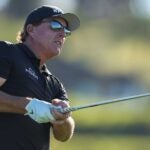 Phil Mickelson during this week’s Tournament of Champions.

You can thank Mary Mickelson.

You see her son this week, on the 18th hole on the Plantation Course at Kapalua, from over 300 out, slicing a driver (!) from off the fairway and dropping it on the green, and now the longtime shot-making bravado makes a little more sense. Or you read his tweets, or hear his cracks, or know of his bets, and now the longtime boldness has a bit of a backstory. And it’s this:

Phil Mickelson’s mom once gave her son a dime for every hole in one he made in their backyard in San Diego.

And young Phil told he’d make enough of those dimes — to one day buy his mom a Mercedes.

For the narrative, you can thank Phil’s brother and caddie, Tim. Ahead of this week’s Tournament of Champions, on the Under the Strap podcast, he dished on their win at the PGA Championship late last May, his time as Arizona State golf coach, and his recruitment of Jon Rahm, among other stories. Including this one, on the 30-yard green behind his childhood home, a guarantee to Mary — and a crack from Tim.

“I didn’t use it nearly as much as my brother. I mean, Phil was out there all the time,” Tim said of the backyard green. “It’s only about — from the very back edge of the tee box to the back edge of the rough behind the green, it might be 35 yards. So it’s not like it’s super long. But my dad used to have this thing cut very short on the green, and he had, at times, 6 to 8 inches of rough around the green, and Phil would just go around the backyard and hit shots, and we had a — well, we still do, we have a tangerine tree, and Phil would go on the hardpan behind the tangerine tree and hit a flop shot over the tangerine tree.

“The bunker we have there is where he learned how to hit the backward shot over his head. We’ve got a canyon behind, so we actually could hit up to a 9-iron if we wanted just to hit shots. And my brother loved to hit, but my dad loved it just as much because my dad, that’s just what sort of my dad would do at night. He’d just go turn on the lights and go spend an hour chipping and he’d create little games around the green. And it wasn’t always about trying to make it. It might be how many shots can I hit in a row that stop just past the last ball. Little games like that. He loved it.”

And that’s where the promise was made.

“I know there was a time where Phil, if Phil made a hole in one in the backyard, so 15-, 20-yard shot, he would get a dime or a nickel — I forget which. I think it was a dime,” Tim said on the podcast. “But he had told my mom once, I’m going to make enough dimes in this backyard that I’m going to buy you a Mercedes.

“And I was young enough to go, well if you’re going to make enough to buy the Mercedes, why doesn’t Mom just go buy the Mercedes herself? It’s all her money, right. But he did end up winning the Tournament of Champions once at La Costa, when it was sponsored by Mercedes and ended up giving my mom a car, so he did make good on it.”

You can find the whole podcast, which is hosted by longtime PGA Tour caddie John Rathouz, below:

Tiger Woods’ next start? Here’s what one of his close friends thinks

How bad was this pro’s missed putt? ‘You may see that twice a year a misread like that’