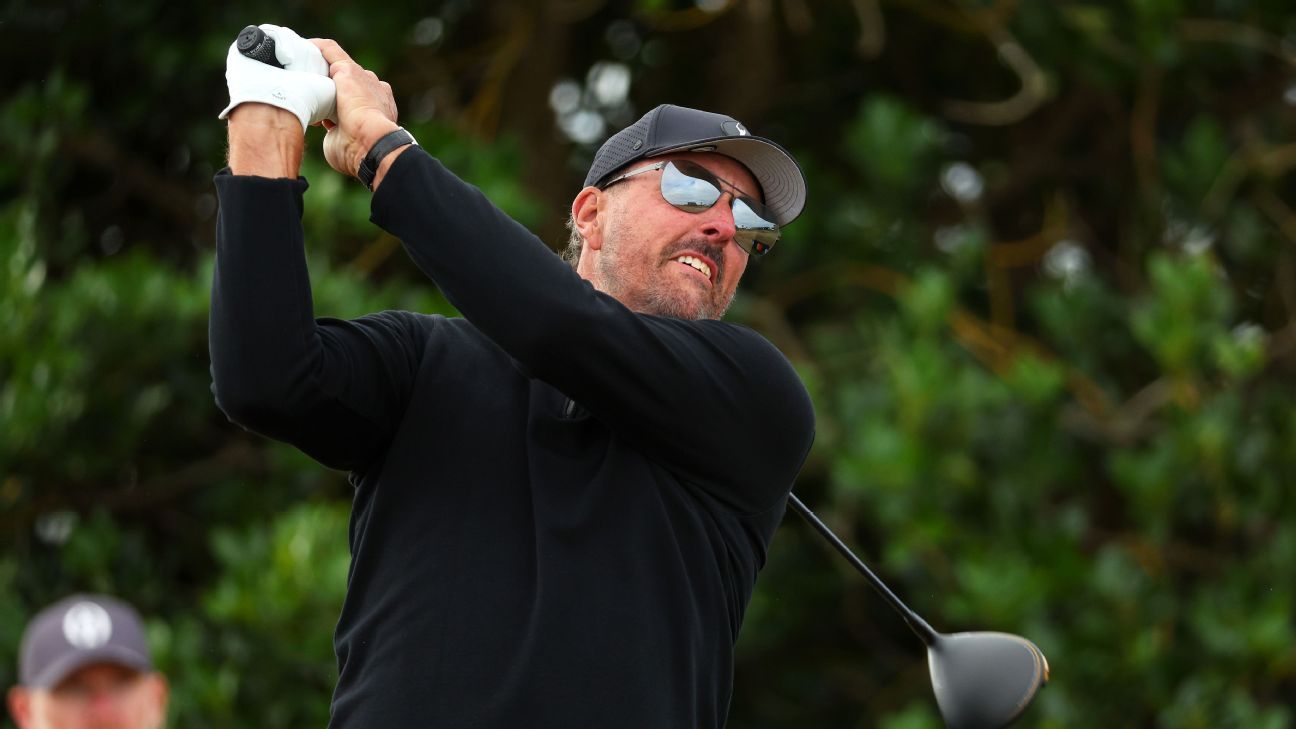 ST. ANDREWS, Scotland — Phil Mickelson said he respects Tiger Woods‘ opinion on LIV Golf after the 15-time major champion said those who joined the breakaway series had “turned their back on what has allowed them to get to this position.”

Mickelson carded even-par Thursday in his first round at The Open at St. Andrews. While it’s the 150th edition of the famous championship, the hot topic this week has been about the ongoing dispute among the various stakeholders over LIV Golf and the golfers who defected to the new series.

When asked Tuesday about LIV Golf, Woods said, “I disagree with it. I think that what they’ve done is they’ve turned their back on what has allowed them to get to this position.”

Mickelson did not attend the 150th Open celebrations earlier in the week, including the Monday’s Celebrations of Champions and Tuesday’s champions’ dinner. Previous winners of The Open were invited, and despite taking the 2013 Open at Muirfield, Mickelson was a notable absentee.

“The R&A contacted me a couple weeks before and said, ‘Look, we don’t think it’s a great idea you go [to the celebrations], but if you want to, you can,'” Mickelson said. “I just didn’t want to make a big deal about it, so I said fine. We both kind of agreed that it would be best if I didn’t.”

Mickelson also missed the champions’ dinners at the Masters and the PGA Championship.

Despite the behind-the-scenes disagreements over the future of the sport after the introduction of LIV Golf, Mickelson said he “couldn’t be happier” with his decision to join the new series, which is being financed by Saudi Arabia’s Public Investment Fund.

“I made the right decision for me,” Mickelson said. “And I’m excited about, like I say, having the opportunity to play competitive golf and have it in my life in a more moderate scale to where I can do some things outside of that too. I freed up a lot of other — freed up a lot of time as well.

“I couldn’t be happier. I think it’s been really good. I can’t wait to get to New Jersey and play another event there. The player experience, the experience of those events from a player standpoint is a 10. You can’t get it any better. Look, it’s not my job to explain or help you understand or whatever. It’s just, I couldn’t be happier.”

While Mickelson received a respectful reaction from the crowd at St. Andrews, Ian Poulter — who also plays in the LIV series — was booed on the first tee by a handful of spectators. He carded a 3-under 69 on Thursday and said he “didn’t hear one” when asked about the booing.

“I actually thought I had a great reception on the first tee, to be honest,” Poulter said. “All I heard was clapping.”

The Ryder Cup veteran also said he had not read any comments from the R&A this week, after CEO Martin Slumbers criticized LIV Golf on Wednesday. But Poulter did say that he hopes the differences between the various stakeholders can be resolved.

“I would hope so, but cleverer people are obviously at the top of the tree than I am,” Poulter said. “I left school at 15. I would have thought clever people could figure this out — clearly not.”

Poulter also said he had received no animosity from his fellow pros, despite high-profile golfers like Woods and Rory McIlroy speaking out against the LIV series.

“I’ve heard great comments, great talks with everyone,” Poulter said. “We might have a difference of opinion, but they’re my friends. You play golf with these guys for 20-plus years or 10, 15 years, you’ve been part of many teams with them.

“Even if they have a difference of opinion, that’s that. We all have opinions, right? We’re still friends, whatever the landscape is and wherever you’re playing golf.”

Tiger Woods is at St. Andrews, and here is how Round 1 is going at The Open

Rory McIlroy has spoken up, and at The Open, his game is doing the talking, too