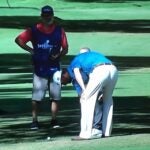 If at first you don’t succeed, try, try — the same rule, but just a different categorization.

Believe it. During Saturday’s third round of the Sony Open, Kevin Chappell was denied one type of rules relief on the 9th at Waialae Country Club, then was granted another after he cleverly adjusted. All he had to do was slide over three words in the rules of golf.

“This is why you always ask,” an analyst on the PGA Tour Live broadcast said.

Indeed. After Chappell’s second shot (more on that below) ended up in a near-grassless patch less than 100 yards from the hole, he called for a ruling. His first bid for relief was for ground under repair, under Rule 16.1. And it was rejected by Tour rules official Ken Tackett.

“What about the cart tracks?” Chappell asked, the conversation picked up by PGA Tour Live mics.

“Yeah, it’s not the tracks,” Tackett said. “It has to be a rut where it’s sitting down. But there’s like eight or nine different places like this on the golf course.”

Tackett had barely finished saying “course” when Chappell took another swing. Waialae had gotten rain, the area was under a tree, and it was muddy so …

Tackett then asked Chappell to take a stance, the official looked from behind, and he denied him a second time. From that angle.

“Can you look on the side here?” Chappell asked, and Tackett did, moving in front of the player.

Success. Relief. And as a bonus, Chappell was even allowed to clean his muddied ball, under Rule 14.1c.

Tackett even apologized for his initial temporary-water assessment.

From there, Chappell hit about 15 feet past the hole, spun it back and dropped the 6-footer for a birdie four. Notably, he also applied Rule 16.1 on his second shot, too — his drive had gone right of the cart path, and he took a drop after the concrete was interfering with his stance. (For those wondering, Chappell would have also gotten relief under rule 16.1 had his ball became involved with an animal hole.)

“Chappell using the rules to his advantage,” the analyst on the PGA Tour Live broadcast said.