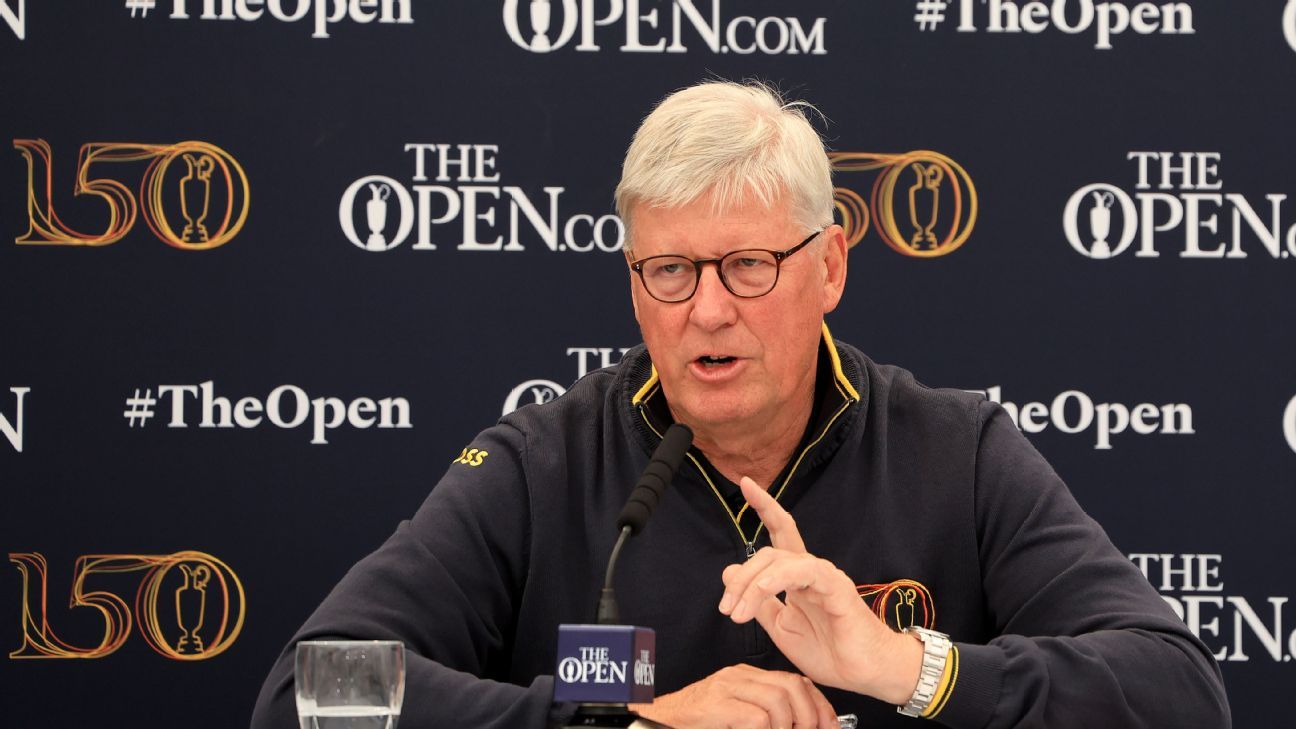 ST. ANDREWS, Scotland — R&A chief executive Martin Slumbers said there is “no such thing as a free lunch” in golf and that he believes LIV Golf is “harming the perception of the sport.”

Slumbers, speaking Wednesday ahead of the 150th Open Championship at the Old Course at St. Andrews, offered the sharpest criticism of LIV Golf yet by the head of a governing body.

“I firmly believe that the existing golf ecosystem has successfully provided stable pathways for golfers to enter the sport and develop and realize their full potential,” Slumbers said. “Professional golfers are entitled to choose where they want to play and to accept the prize money that’s offered to them. I have absolutely no issue with that at all. But there is no such thing as a free lunch.”

There are 24 LIV Golf players competing in The Open, including former major champions Phil Mickelson, Brooks Koepka, Bryson DeChambeau, Dustin Johnson and Louis Oosthuizen. Some of them were lured to the new breakaway circuit, which is being financed by Saudi Arabia’s Public Investment Fund, by signing bonuses reportedly worth more than $100 million and $25 million purses for each event.

The PGA Tour suspended more than 20 golfers who competed in the first two LIV events at Centurion Club outside London and Pumpkin Ridge outside Portland, Oregon. The DP World Tour also fined and suspended its players from competing in three of its events that are co-sanctioned by the PGA Tour.

“I believe the model we’ve seen at Centurion and Pumpkin Ridge is not in the best long-term interests of the sport as a whole and is entirely driven by money,” Slumbers said. “We believe it undermines the merit-based culture and the spirit of open competition that makes golf so special.

“I would also like to say that in my opinion, the continued commentary that this is about growing the game is just not credible and, if anything, is harming the perception of our sport which we are working so hard to improve.”

Slumbers said LIV players were allowed to compete in The Open this year because they had already met qualifying criteria or had been awarded exemptions. He said the R&A would reassess the qualifying standards before the 2023 Open at Royal Liverpool in England.

“I never said the best golfers will not be able to play,” Slumbers said. “We will hold totally true to The Open being open to anybody. But we may well look at how you get into that, whether it’s an exemption or a need to qualify through our qualifying process.”

Despite his harsh criticism, Slumbers insisted the R&A wasn’t planning to ban LIV players from competing.

“Looking ahead to The Open next year, we have been asked quite frequently about banning players,” Slumbers said. “Let me be very clear: That’s not on our agenda. But what is on our agenda is that we will review our exemptions and qualifications criteria for The Open. And whilst we do that every year, we absolutely reserve the right to make changes as our Open Championships Committee deems appropriate.”

Slumbers also defended the R&A’s decision not to invite LIV Golf CEO Greg Norman, a two-time winner of The Open, to St. Andrews for the 150th celebration. Slumbers noted that Norman hadn’t been to St. Andrews since 2010 and hadn’t attended The Open in many years.

Norman called the R&A’s decision “petty” in an interview this week with Australian Golf Digest.

“We are absolutely determined to ensure that this goes down in history as about The 150th Open,” Slumbers said. “We decided that there would be, based on noise that I was receiving from multiple sources, that that was going to be potentially unlikely.

“We decided that we didn’t want the distraction. We wanted to ensure that the conversation was all about this week and playing golf and balls in the air [on Thursday] and the champion golfer on Sunday.”