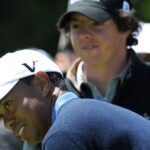 Rory McIlroy and Tiger Woods in 2010, four years after they first played in the same event.

Half his lifetime ago, Rory McIlroy made his first start at the Dubai Desert Classic.

The year was 2006. McIlroy was 16 at the time and playing as an amateur. He shot 72-72 to miss the cut by a shot. But he left with an unforgettable memory anyway thanks to his enthusiastic pursuit of childhood hero Tiger Woods. It was the first time the two had played in the same field, and McIlroy took full advantage of the access.

“I remember I played on Thursday morning, and then on Thursday afternoon Tiger was playing. I came out in the afternoon and took one of the photographer’s cameras off of him and was able to follow inside the ropes, which was pretty cool,” he recalled to ESPN several years ago.

“That was my first real taste of Dubai, and I’ve been coming back every year since.”

Ahead of this year’s event, McIlroy reminisced on that day.

“I had a better view than most, being able to get inside the ropes and have a media credential,” he said. He can even remember the specific shots he watched. One, specifically: “Tiger to this day, hit a 5-iron out of the right rough on 10 and landed it on the green and stopped it on the green and to this day it was one of the best golf shots I’ve ever seen. Just sticks out in my mind and I was right there for it.”

Woods would go on to win that year, beating Ernie Els in a playoff.

It was the beginning of so many things for McIlroy. A year later, he’d turn pro. In 2009, he’d earn his first professional win at the same event. Several years after that he’d join Woods on Nike’s Tour staff. It was the beginning of McIlroy’s time in Dubai, too, where he would take up residence for several years. Over time McIlroy and Woods became neighbors in Florida and occasionally play golf, hang out or admire Woods’ trophy collection.

It’s an evolution that teenage McIlroy could only have dreamt of.

“It’s cool. I watched a lot of golf events as a teenager, and went to Mount Juliet for the World Golf Championships, went to The Open at Troon, went to the World Match Play at Wentworth a bunch of times. I loved getting up close and watching those guys play and try to learn something from them and get inspiration. If there’s young kids running around this week, they can feel the same way or feel the same things as what I thought back then, then that’s a pretty cool feeling.”

A reporter followed up with McIlroy to ask if he were 16 at the same event this week who he’d choose to follow.

“No, I mean, there’s so many guys. Obviously Collin [Morikawa], Viktor [Hovland]. You have got so many guys that have been part of the Tour for so long. I’m thinking like [Padraig] Harrington, [Ian] Poulter, [Lee] Westwood, [Henrik] Stenson, Monty [Colin Montgomerie] for sure. How many more times are people going to get a chance to see Monty play golf in this part of the world?”

McIlroy got off to a strong start at this year’s event, following an opening 71 with a second-round six-under 66 to share fifth place at the tournament’s halfway mark.

A win this weekend would mark McIlroy’s third in the event; he won in 2009 and 2015, too. He’ll head to the weekend with plenty of good memories to draw on. 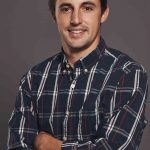 'It can change people's lives': Why Torrey Pines' *other* event this week could be so impactful