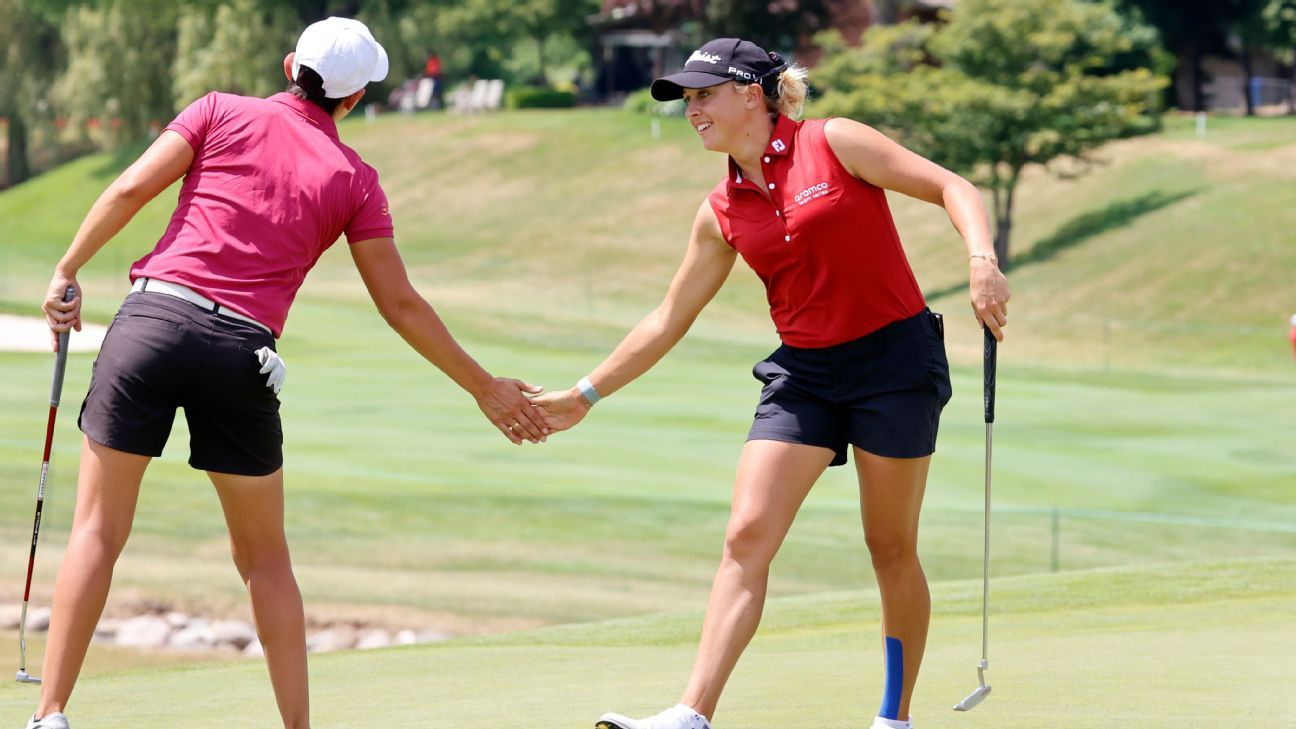 Tied with Sorenstam and Sagstrom after an opening 5-under 65 in alternate-shot play Wednesday, Roussin and Weber had a 61 at Midland Country Club in the better-ball round to reach 14-under 126. The teams will play alternate shot Friday and finish Saturday with better ball.

“We’re just going to do more of the same,” Weber said. “I know that sounds so boring and I’m so sorry for that, but we’re just going to keep doing what we’re doing. I think what we’ve been doing has been working really well.”

Sorenstam and Sagstrom slipped back with a 66.

Sorenstam, 51, is making her second LPGA Tour start of the year and only her third since retiring after the 2008 season. The Hall of Famer missed the cut in the U.S. Women’s Open last month, then tied for fourth last week in Nevada in the mostly male American Century Championship.

“I really like this format and, of course, playing with Madelene,” Sorenstam said. “It’s a highlight. She’s one of the upcoming stars and has done so well. We’ve been playing together a little bit in Orlando. I have a great friendship with her.”

Roussin, the Frenchwoman playing on Bastille Day and her mother’s birthday, aced the par-3 seventh with a 46-degree wedge.

“It helps when you have people around you to just talk to,” Roussin said. “We’re having fun both with our caddies as well, so we created that bubble I would say, and it just helps to think about the next shot once you’ve hit the previous one.”

Roussin and Weber, from the Netherlands, didn’t know each other very well before this week.

“I think for the most part I felt like I was just there cheering her along, but in the end I hit a couple of good putts,” Kupcho said. “Ham and egged it pretty well.”

Sorenstam and Sagstrom were 9 under with Karrie Webb-Marina Alex (62), Sophia Popov-Anne van Dam (61) and A Lim Kim-Yealimi Noh (62). Sisters Nelly and Jessica Korda (63) were 8 under.

Lexi Thompson and Brittany Altomare followed an opening 71 with a 65 to miss the cut by a stroke. Ariya and Moriya Jutanugarn, also dropped out, shooting 73-64.

The tournament is scheduled to end Saturday so players can head to France next week for the fourth major of the year at the Evian Championship. That will start the European portion of the LPGA Tour schedule that includes the Women’s British Open at Muirfield.

LIV's presence, Tiger's quick turnaround and everything else to know for Round 2 of The Open