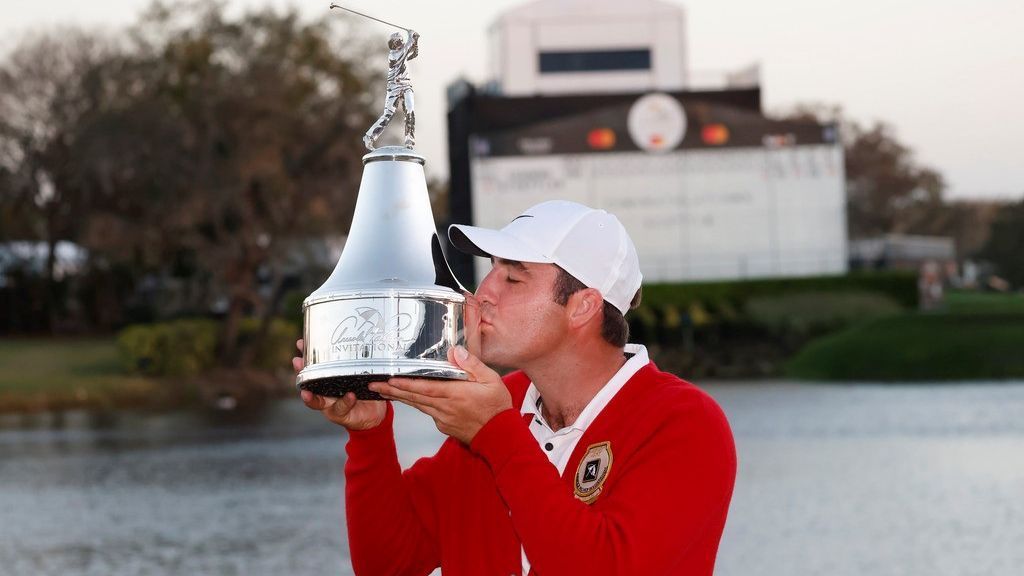 ORLANDO, Fla. — Scottie Scheffler played the kind of golf that wins a traditional U.S. Open, and that’s what the Arnold Palmer Invitational felt like Sunday at Bay Hill.

In another final round that featured some of the toughest scoring conditions in four decades, Scheffler made key putts to save two unlikely pars, followed with a pair of lag putts, and closed with an even-par 72 for a 1-shot victory.

Scheffler now has two PGA Tour titles in the past month, having picked up his first victory at the Phoenix Open. That one was loud. This one was stressful for everyone with a chance.

The scoring average was 75.48, lower by a fraction than it was a year ago. Only 10 players finished the tournament under par.

Billy Horschel was the last player with a shot at catching Scheffler with a 30-foot birdie putt on the last hole that never really had a chance. Horschel shot 75 and tied for second along with Tyrrell Hatton (69) and Viktor Hovland (74).

Hovland was still tied for the lead until catching a plugged lie in the front bunker on the 17th and having to two-putt from 50 feet on the fringe for bogey. Needing a birdie on the last hole to catch Scheffler, with whom he was paired, the Norwegian missed from 18 feet.

Hatton, who won at Bay Hill two years ago, somehow managed seven birdies on a course that was baked and brittle, with greens running about 14 on the Stimpmeter and so few blades of grass that putts were sliding as much as they were rolling.

He finished more than an hour ahead of the leaders, and it looked as though it might be enough to at least force a playoff.

Scheffler was simply tough as nails.

He was in deep trouble on the 15th, in the pine straw and behind a tree, when he tried to hit a punch hook up the fairway. The ball dribbled out into thick rough. He did well to get that onto the front of the green and then made a 20-footer for par.

On the par-5 16th, Scheffler caught a terrible break when his drive ended up in a lie so awkward in thick grass that he couldn’t get it back to the fairway. Then, he had to lay up to avoid going into the water. He hit wedge to 6 feet and saved par.

His final two holes, not nearly as theatrical, were no less important. Scheffler two-putted from 45 feet, the ball coming within inches of going in, for par on the 17th. And from deep rough left of the 18th fairway, he got it onto the green to just inside 70 feet. That putt stopped inches away, leaving a tap-in par and ultimately a big win at Arnie’s place.

Horschel shot 40 on the front nine and never caught up. He had shared the 54-hole lead with Gooch, who went out in 43.

The real heartbreak went to Gary Woodland, trying to win for the first time since the U.S. Open at Pebble Beach. Steady all day, he surged into the lead with a shot from a sandy lie, around the trees and onto the green at the 16th, where he made a 25-foot eagle putt.

But on the 17th, he took two shots to get out of a front bunker and then missed a 5-foot putt, making double bogey. He found the left rough off the 18th and closed with a bogey for a 73 to finish in a tie for fifth with Chris Kirk.

Kirk was right there with a chance at 5 under with a birdie on the 13th. He three-putted the 14th for the first of two straight birdies and closed with three pars for a 72.

The consolation prize for Kirk was earning one of three spots available for The Open at St. Andrews this summer. Gooch salvaged his rough start with a bogey-free back nine to finish in the top 10 and earn his spot in The Open.

Players had to finish among the top 10 to get into St. Andrews. Graeme McDowell was poised to get the last spot until a double bogey and bogey over his last three holes for a 76, dropping him two spots out of the top 10.