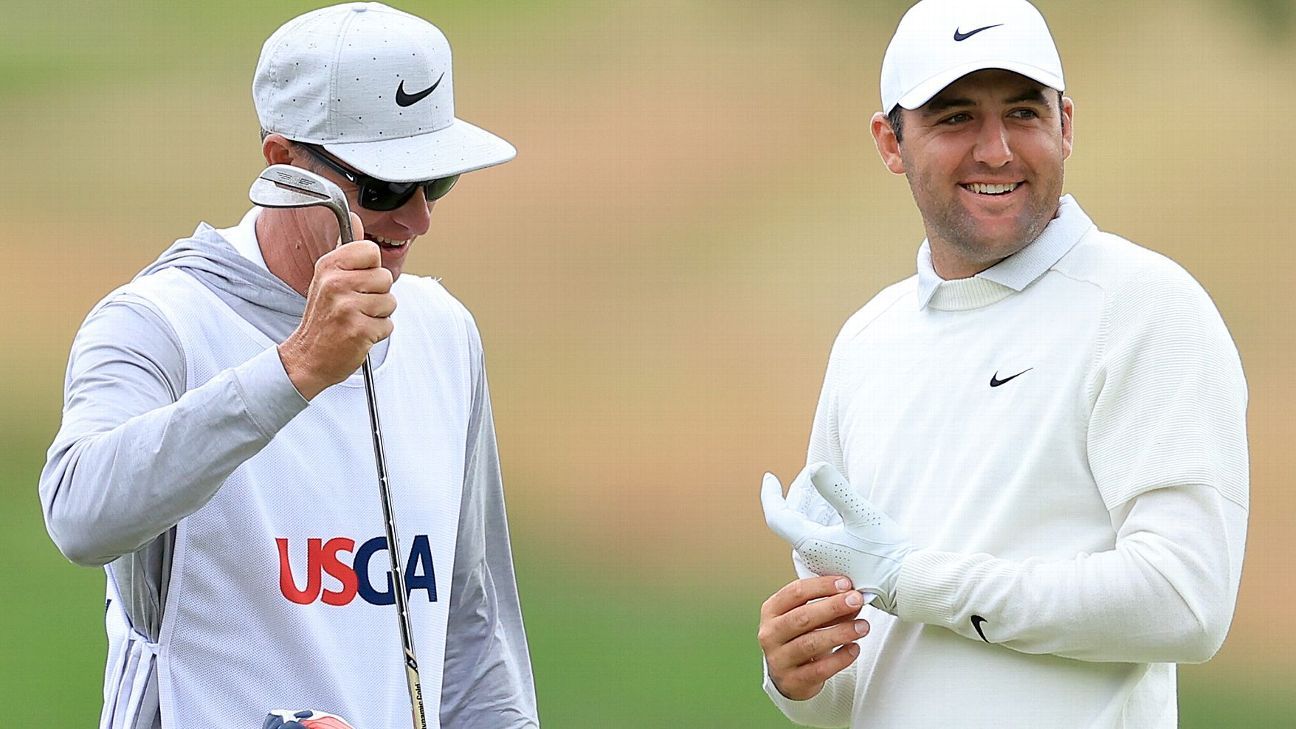 BROOKLINE, Mass. — When world No. 1 golfer Scottie Scheffler made the turn in the third round of the U.S. Open on Saturday, he was 6 under and had a 2-shot lead over Collin Morikawa.

By the time Scheffler reached the tee box on the 14th hole, he no longer had the lead and had given back 5 shots.

With swirling winds, knee-deep rough, firmer greens and cooler temperatures, The Country Club was showing its teeth, even for the player who had been the best in the world the past four months.

“For me, that stuff is going to happen at U.S. Opens,” Scheffler said. “The golf course is just hard. The conditions are hard. The scores are high. All I was going to do is just try and hang in there. That was my only goal. Just kind of hang and keep myself in position.”

Scheffler was able to do that by making a birdie on the par-4 17th and sinking a 14½-foot putt for a par save on the 18th. He finished the round at 1-over 71. After 54 holes, he is tied for fourth place at 2 under, 2 shots behind co-leaders Will Zalatoris and Matt Fitzpatrick.

“I think the U.S. Open is very taxing, mentally and physically,” Scheffler said. “I think that’s all part of what makes this tournament so fun. You’re going to get tested all different kinds of ways, whether it be physically, mentally, whatever it is. This golf tournament is going to test you. That’s why I show up here.”

Scheffler, who won four times in six starts earlier this season, including his first major championship victory at the Masters in April, was more than tested during a four-hole stretch on the back nine.

On the par-3 11th, Scheffler’s tee shot bounced hard off the green and nearly went into a hazard on the right. He failed to get up and down and carded a double-bogey 5 to drop him to 4 under.

Then, on the par-4 12th, Scheffler’s drive was down the middle of the fairway, but his approach shot was way short. He chunked his chip shot and two-putted for a bogey. He made another bogey on the 13th hole after he pulled his tee shot into the thick rough on the left and had to lay up.

On the par-5 14th, Scheffler’s tee shot was buried in the right rough. He sprayed his second shot way right and missed a 7-foot putt for par. He went from 6 under to 1 under in the four-hole stretch. It was the first time in his major career that he had four straight bogeys or worse, according to ESPN Stats & Information research.

“I just kept reminding myself [that] I’m still in the golf tournament,” Scheffler said. “I made the double on 11, and when I walked off that one, I was, like, ‘Dude, just pretend you bogeyed 10 and birdied 8. It’s not a big deal.’

“After the bogey on 12, it’s not a big deal. I’m still maybe 1 under for the round. Then after 13 I just kept trying to pretend that what was happening wasn’t happening. Eventually I was able to steady the ship.”

That might be Scheffler’s biggest strength. No matter what happens during a round, he never seems to get too flustered. After he hit his second shot into a bunker on the 18th hole and didn’t hit a good chip shot, he slammed his wedge on his cleat and then the ground. But he was able to compose himself and make the putt.

When Scheffler was asked what emotions he felt on a day like Saturday, he said “happy and sad.”

“I just hit not a good shot,” Scheffler said. “It’s a shot I’ve been practicing and it’s a shot I’ve been working on. I just didn’t execute. I knew how hard the putt was, and that’s why I was so frustrated because I had a chance to get it somewhat close, and I didn’t hit a great shot.”

In the end, it didn’t matter. Scheffler made the putt and gave himself a chance to win again Sunday. He’ll attempt to become the eighth player to win the Masters and the U.S. Open in the same season; Jordan Spieth was the last one to do it, in 2015.

“Anytime you can win a golf tournament, especially a major, is really special,” Scheffler said. “For me, I’m not thinking about what I did a month ago. I’m not thinking about what I did two months ago. Right now, I’m here at the U.S. Open, and I’m going to try to win the golf tournament tomorrow. If I do, it’s going to be really fun. If I don’t, life will go on.”

Sights, sounds and best moments from the final round of the 2022 U.S. Open