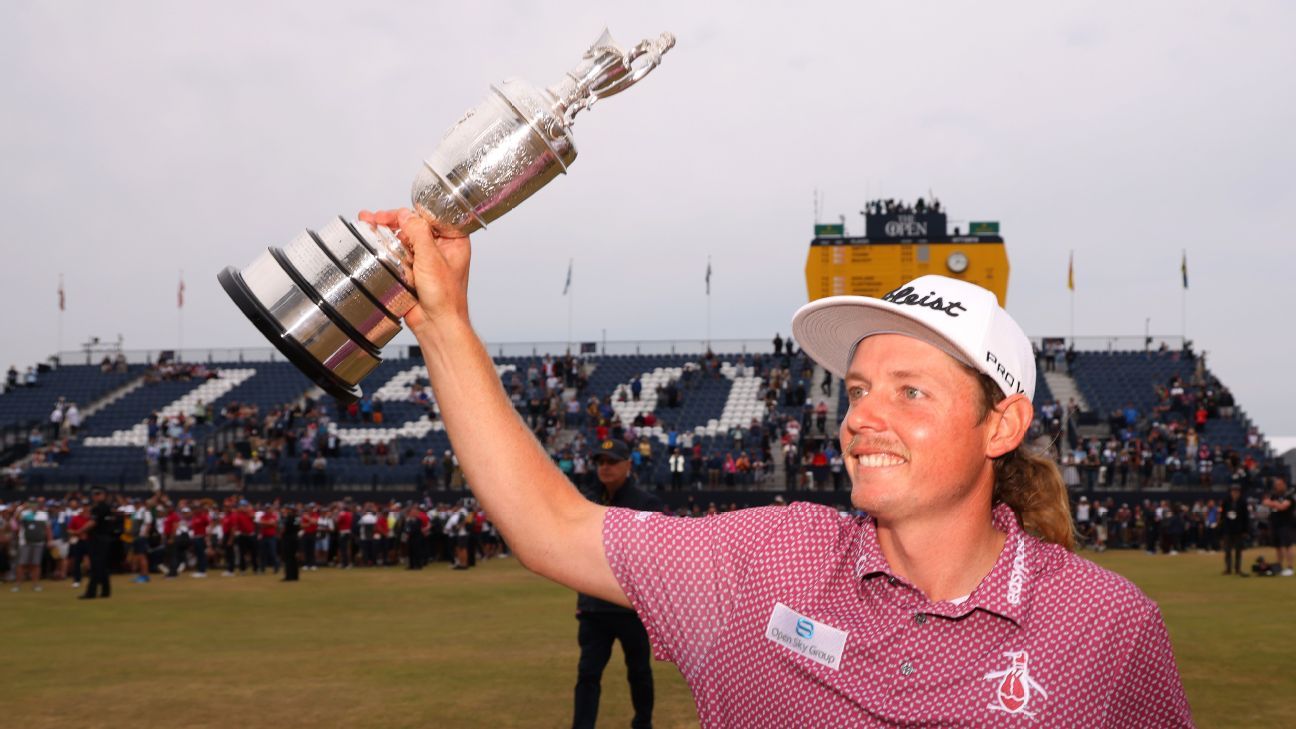 ST. ANDREWS, Scotland — Cameron Smith charged his way into history on the Old Course, a Sunday stunner at St. Andrews that sent the Australian to his first major title by overcoming Rory McIlroy to win the Open Championship.

The stage was set for McIlroy to end his eight-year drought in the majors and cap off a week of celebration at the home of golf in the 150th Open.

Instead, Smith stole the show by running off five straight birdies to start the back nine and delivering more clutch moments at the end. His 8-under 64 was the lowest final round by a champion in the 30 times golf’s oldest championship has been played at St. Andrews.

Smith won by 1 shot over Cameron Young, who holed a 15-foot eagle putt on the final hole to ever-so-briefly tie for the lead.

It wasn’t enough, and neither was anything McIlroy could muster.

McIlroy couldn’t make a putt early. He couldn’t hit it close enough late. His last good chance was a 15-foot birdie attempt on the scary Road Hole at No. 17, and it narrowly missed to the left.

Smith, who saved par on the 17th with a 10-foot putt, was at the front of the 18th green with his tee shot. From 80 feet away, his pace up the slope and toward the cup was close to perfect, leaving him a tap-in birdie to finish at 20-under 268.

Smith matched the major championship record to par, last reached by Dustin Johnson in the 2020 Masters held in November.

McIlroy needed eagle to tie him, and his chip through the Valley of Sin had no chance. He missed the birdie and wound up with a 70 to finish third.

Even with the silver Claret Jug in his hands, it was hard to believe.

“All the names on there, every player that’s been at the top of their game has won this championship,” Smith said. “It’s pretty cool to be on there. It really hasn’t sunk in yet. I don’t think it will for a few weeks. Yeah, it’s just unreal.”

Smith is the first Australian to win at St. Andrews since Kel Nagle in 1960, when he topped a rising American star named Arnold Palmer, the people’s choice.

That’s what McIlroy is now, and all day there was an energy along the humps and hollows of the Old Course, all of the fans waiting to celebrate McIlroy as an Open champion at St. Andrews.

He gave them little to cheer for — two birdies, 16 pars, more disappointment.

“The putter went cold on me,” McIlroy said. “When both Camerons — especially Smith — went on that run on the back nine, I had to dig deep to make birdies. And I just couldn’t. I got beaten by the better player this week. To go out and shoot 64 to win the Open Championship at St. Andrews is a hell of a showing. Hats off to Cam.”

Under that hat is a mullet the 28-year-old Aussie has been growing for the last few years, and now he has a far greater identity: champion golfer of the year — at St. Andrews, no less.

He won for the third time this year — his most recent prior victory was at the Players Championship — and moves to No. 2 in the world behind Masters champion Scottie Scheffler.

Smith is the first Australian to win the Open since Greg Norman in 1993 at Royal St. George’s. Norman was asked not to return this year — there was no indication he was coming — because of his Saudi-funded LIV Golf Series that has offered millions to attract players like Johnson and Bryson DeChambeau, major champions who finished in the top 10.

But this day belonged to Smith and that magical putter.

He started the final round 4 shots behind and was still 3 behind when he made the turn. McIlroy was playing controlled golf, his only birdie a 2-putt from 18 feet on the par-5 fifth. Viktor Hovland, who started the final round tied with McIlroy, was never a factor. He didn’t make his first birdie until the 12th hole and closed with a 74.

That run by Smith on the back nine is now part of Open lore.

He hit a nifty pitch to 5 feet for birdie on the short 10th. He was bold to a back pin on the par-3 11th and holed a 15-foot birdie, and he birdied the next two holes from about that length. His fifth in a row was a putt from 90 feet on the par-5 14th, over a huge mound and down the slope to tap-in range that gave him the lead for the first time.

McIlroy couldn’t catch up. His lag putting was terrific, but that wasn’t what he needed. And he got no help from Smith, whose one missed shot set up his biggest challenge.

The nefarious Road Hole bunker was between him and the flag on the 17th. He used his putter to ride over the right edge of the bunker and onto the green, 10 feet away, and he poured in another putt, this one for par to stay in front.

Young had his chances in his Open debut. He left short a 6-foot putt with about a foot of break on the 15th. He came up short with a wedge on the next hole. He drilled his drive and approach to the 17th, only to leave another birdie chance short.

He finally delivered, but all that got him was a 65 and the silver medal.

Smith made his last birdie, and the engraver went to work on that silver Claret Jug, a prize first awarded to the 1873 champion at St. Andrews. There’s a lot of history around this gray, old town, and Smith became part of it in a big way.

McIlroy sees chance to win The Open 'slip away'