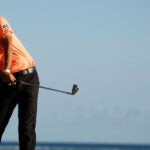 Kevin Na hits his tee shot on Saturday on the 17th hole at Waialae Country Club.

Jim Furyk first played this tournament 28 years ago, that number is older than most of the golfers in the field this week, and so Brett Grant thought he was just being respectful. “Played a practice round with a guy that called me “sir,” and later on he asked me what I liked most about the Champions Tour, and I said, “No one calls me ‘sir,’” Furyk said. “He said his dad would be angry with him if he didn’t.” You can call the 51-year-old a contender, too. They say age is nothing but a number, and on Thursday, one of the oldest players in the field went low. Here are three things you need to know after the first round of the Sony Open at Waialae Country Club in Honolulu.

For a while, Kevin Na was flirting with another Furyk number.

Na, the defending champion, birdied 2 and 3, then 5 and 6, then eagled 9 for a front-nine 29, and there were whispers of Furyk’s record 58 in the Hawaiian breezes. But while he stalled some on the back nine, with only three birdies and no bogies, he did grab a one-shot lead after a nine-under 61, which also tied his career low.

“I played unbelievably well,” Na said. “I did everything well today, and my iron play was amazing. My distance control has been great. You know, for playing a brand new ball, I’m doing pretty well controlling my distance. And I tell you what, I had a chance for a 59. I gave it all I could. I’m a little disappointed my putts didn’t fall; some of the good putts that I hit didn’t fall.

“But it’s still a good round.”

Jim Furyk is a shot out of the lead

One shot behind Na was Furyk and Russell Henley, and two back were Kevin Chappell, Patton Kizzire, Michael Thompson and Seamus Power. Furyk’s round was fueled by 156 feet of made putts and an ace on the par-3 17th.

The hole in one also capped a five-under-over-four-hole stretch to end his round.

“I’ve always loved being here — it helps,” said Furyk, who won here in 1996. “I love Sony. It’s a place I had a lot of success. I think I lost in a playoff in ’97. Had a lot of Top 10s here. Love the course. It’s a place that I feel like I’m not hitting the ball far enough to compete out here on a regular basis on a lot of the golf course.

“But Waialae is a place I still feel I can get around and shoot under par pretty well and so it’s fun. Places I’ve won, Valspar, Heritage, those are courses I can still compete on.”

Billy Horschel is four back

Among other players, Billy Horschel shot a 65 and is four shots back, Hideki Matsuyama shot a 66, and Cameron Smith, last week’s winner, shot a 67.

Na matches his career low with 61 at Sony Open