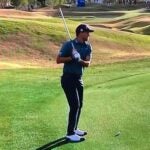 Lee Hodges on Saturday after stopping during his backswing on the 8th hole at the PGA West Stadium Course.

Lee Hodges stood over his ball, then backed off. The wind on the par-5 8th at the PGA West Stadium Course had changed directions, and he changed his mind on the 212-yard shot. He pulled a different club from his bag, his caddie, Robert Peeler, backed away again, and he addressed his ball again.

And again the wind blew.

While the shot of this American Express tournament is still to be decided, its shout came during Saturday’s third round.

“Hold up, hold up,” Peeler screamed to the right of his man. And Hodges did.

But hold up: Has a caddie ever stopped a player in the middle of his swing? It’s here we’ll note, too, that Hodges was also tied for the lead on the second-to-last day, only two holes in his round remained (he started on the back nine), and he was back in the big leagues after playing last year on the Korn Ferry Tour. So it’s not as if Peeler stopped him on the range, either.

“Not that late in the game,” analyst — and 2008 Masters champ — Trevor Immelman said on the Golf Channel broadcast. “That was pretty late right there.”

And you, John Cook? He was also on the call and also a Tour winner.

“That was pretty bold,” Immelman said.

Very. Hodges, after a quick swipe at the grass to the left of his ball, huddled back up with Peeler, then grabbed a different club. On the broadcast, Cook noted that the wind was at Hodges’ back.

“That caddie is praying that he’s correct now,” Immelman said on the broadcast.

He was. Hodges hit just past the hole, it rolled to the back of the green, and as Peeler handed his player his putter, he smiled. From there, Hodges two-putted for a birdie four, and he’ll enter Sunday’s final round still tied at the top.

“That is some gutsy caddying right there,” Immelman said on the broadcast.