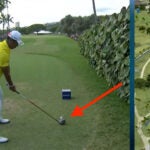 Hideki Matsuyama’s magnificent, tournament-winning 3-wood at the Sony Open was the toast of the golf world Sunday night into Monday morning. As it should be. A 3-wood from 277 yards into a blinding sun to 3 feet? There are maybe a couple of dozen mortals, maybe fewer, who could execute that shot under PGA Tour playoff pressure. It took your breath away.

But there’s another Matsuyama swing that also deserves closer inspection: his tee shot on 18 in regulation: a 338-yard blast that set up a two-putt birdie. Without Matsuyama’s 4 on that 551-yard par-5, there’s no playoff with Russell Henley. Without the playoff, there’s no instant-classic 3-wood.

The closer at Waialae is a hard dogleg left with bunkers and trees flanking both sides of the turn, meaning the tee shot is an awkward one. On Sunday, Henley dumped his drive into the right fairway bunker both in regulation and the playoff, forcing layups in both instances. “Two poor tee shots,” Henley said later.

When Matsuyama stepped onto the 18th tee in regulation, he trailed Henley by one. If ever he needed a long, fairway-finding bomb, it was now. And here’s where things got interesting. All week, Matsuyama had been favoring the right side of the tee on 18, to give himself a favorable line. But late on Sunday, he took that strategy to the extreme, teeing up his ball directly behind the left edge of the right tee marker. It was an unusual sight — and, for amateurs watching from home, perhaps a nervy one. It wouldn’t be hard to imagine a 15-handicapper teeing his or her ball in that same spot and smashing the marker into pieces.

But for Matsuyama, the positioning was a clever piece of course strategy, because he knew the farther right he pegged his ball, the better angle he would create for his corner-cutting tee shot. To give himself clearance to get over the marker, Matsuyama took advantage of the two club-length area behind the tee in which golfers are permitted to tee their balls. (By the way, there’s a lesson here for golfers of all abilities: giving some thought to where you tee up your ball — especially on doglegs — can significantly alter the result of your tee shot.)

Then it was go-time. Matsuyama, with driver in hand on this hole for the first time all week, wheeled back and hammered a shot at the left corner of the dogleg, applying so much force that he nearly toppled over. “That’s probably the first swing of its type that I’ve had on the PGA Tour up until now,” he said after the round. “I was playing for eagle there. I knew Russell would probably birdie and I needed eagle to tie.”

Matsuyama’s ball soared over the trees and a yawning bunker on the inside corner of the dogleg and came to rest on the right side of the fairway just 211 yards from the hole. From there, Matsuyama needed only a 6-iron into the green, whereas Henley, who was in the sand 36 yards behind Matsuyama, had no choice but to play the hole as a three-shotter. Matsuyama was unable to convert the eagle he’d thought he would need, but a birdie proved to be sufficient after Henley made par.

In the playoff, Matsuyama elected a different, more conservative strategy off the tee, returning to his 3-wood. After a 264-yard shot up the left side of the fairway, the Masters champion had 277 remaining.

You know what happened next.

As GOLF.com’s executive editor, Bastable is responsible for the editorial direction and voice of one of the game’s most respected and highly trafficked news and service sites. He wears many hats — editing, writing, ideating, developing, daydreaming of one day breaking 80 — and feels privileged to work with such an insanely talented and hardworking group of writers, editors and producers. Before grabbing the reins at GOLF.com, he was the features editor at GOLF Magazine. A graduate of the University of Richmond and the Columbia School of Journalism, he lives in New Jersey with his wife and foursome of kids.

Gimme that: This insulated cup is the perfect daily companion