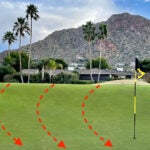 Planning a Scottsdale-area golf trip can be a daunting proposition. With more than 200 public courses from which to choose, the options are dizzying. That was the position in which I found myself a few months back when three forty-something neighborhood pals and I committed to a three-day January golf jaunt in the Arizona desert. Duties were divvied. Scott handled the housing (Airbnb!), Dan booked the car (Toro!); I was tasked with tee times. (Matt gamely ordered groceries to the house — actually, his wife did. Thank you, Heather.)

In search of golf recs, I dropped a few emails to Scottsdale friends and insiders. Most of the suggestions didn’t surprise me: We-Ko-Pa, Grayhawk, Southern Dunes, Troon, et. al., a few of which we ended up playing. But there was one recommendation with which I was unfamiliar: the Short Course at Mountain Shadows, an 18-hole par-3 design, in Paradise Valley, just north of Camelback Mountain.

Par-3 courses have become en vogue on buddies’ trips itineraries, with the likes of Bandon Dunes, Sand Valley, Pinehurst and Big Cedar Lodge all now offering the format. And for good reason: on a three- or four-day golfapalooza, a respite from regulation rounds is a boon for the mind, body and soul — not to mention the wallet.

But until my friend mentioned Mountain Shadows (where January rates start at $87), I was unaware of a top-shelf public par-3 course that golfers could and should slot into a Scottsdale visit. My travel mates quickly warmed to the idea so we penciled in Shadows as the last round of the trip. At the very least, we figured it would be a good spot to lick our wounds and settle any outstanding bets.

When you veer off East Lincoln Drive into the Mountain Shadows lot, there’s no sign of a golf course; the property’s low-slung Mad Men-vibes hotel obscures it. The golf reveal doesn’t happen until after you walk down a tunnel into the pro shop, settle up and then exit through the other side of the building to a patio bar with a lively happy-hour scene. And, wait … is that a four-person golf cart?! Indeed, it is! Shadows is an easy walk but if you’re looking for camaraderie and trash-talking — and somewhere to store your snacks and drinks — quad-carts are a joy.

So are the mountain views. The dry craggy peaks that serve as a backdrop for many of the tee shots, paired with the preponderance of transplanted palm trees, make the place feel more SoCal than AZ.

The first hole — just 95 yards from the middle tees — gives you a good sense for what’s in store. The tee shot is straightforward enough, but a wicked false front punishes any shot that’s even a yard short, and the green is so wildly contoured that opening with a four-putt double, as your correspondent did, is a very real possibility.

Most of the layout follows a horseshoe pattern with holes 1-6 and 13-18 playing around the perimeter; inside the ’shoe are several dozen residences, along with holes 7-12. On the card, none of the tee shots look too bruising, but do yourself a favor and pick suitable tees, because Shadows is target golf on steroids. Loose shots will leave you in dreadful spots. From the tips, there are a handful of wedge tee shots but also four holes that play north of 170 yards to pins that would make Collin Morikawa tremble.

The original course on this site was built in 1961, a couple years after the resort opened. In the ensuing years, the property changed ownership several times before a complete overhaul in 2017 that included the addition of Forrest Richardson’s par-3 course. No one will mistake Richardson’s work for something you might find in, say, Scotland, but he did weave in several nods to the templates of classic golf-course architecture.

The first comes at the 156-yard 3rd, which has a Biarritz green — a putting surface bisected by a deep gulley, in this case one with a harrowing depth of 4 feet. Among the other throwback touches: a Punchbowl green at the 10th and an L-shaped double-green shared by 13 and 14. There’s nothing old-school about the 7th: a nervy 75-yard pitch over water to a peninsula green. Nip your wedge just right, or else.

The 12th, which stretches all of 84 yards, is aptly named Oasis for its setting, with water fronting the green, palm trees around it and a dreamy backdrop of the Mummy Mountains. But this is also where things start to get trippy. The green has two tiers connected by a 10-plus-foot slope that must be nearly 45 degrees. Leave your tee shot on the top shelf with a bottom-shelf pin and you can look forward to seeing your birdie try — no matter how delicately you trundle it over the edge — scoot into the pond.

There are a few other shots like this at Shadows that lie somewhere between severe and downright sadistic, often determined by where the holes are cut. When we arrived at the 108-yard 16th, we found a tabletop green with a flag just a couple of paces from the front edge. Find the green and the challenge continues with a deep depression that, in the words of the official hole description, “has been pushed into the surface as if by some inebriated Scottish greenkeeper.” It’s nightmare stuff, but also endlessly entertaining.

After holing out at 17, we encountered more quirkiness en route to the closer: a par-2 17½th putting hole known as the Forrest Wager. There’s no yardage on the card, but 17½ plays about 40 yards, all on the ground; it’s designed for bet-settling … or -amplifying. Two-putting on the swaled surface is a terrific effort. An ace would be the shot of the day.

That seems an impossibility until you arrive at the hole and discover there’s a jumbo-sized cup, probably twice standard circumference. If only we’d known that on the tee it might have instilled in us at least a small dose of confidence. I managed a two-putt for the win (and a considerable skins haul) but solely because I had the immeasurable advantage of putting last and seeing the outcomes of the others guys’ attempts. Wild finish to a wild round.

A few days after we’d returned from our trip, I texted my friends to tell them the bonus hole had another wrinkle to which we’d been oblivious. We had scored the hole traditionally, as part of our best-ball team match. Lowest score wins. But on its website, Shadows suggests another format for 17½: “The object is to play against your opponents in similar fashion to the popular golf game Bingo Bango Bongo. Here, one point is awarded for the closest to the hole on the first shot played. Another for the first player to hole out (the farthest plays first, as always). And a third point for the lowest score.” Ah yes, much more fun!

Scott, who had been on the losing side, immediately wrote back, and only half-jokingly:

“We didn’t play the hole the way that it was intended … I demand a rematch. First week of March? Fly in, We-Ko-Pa in the afternoon. New course in the morning, Mountain Shadows in the afternoon and fly home that night?”

He got me thinking.

As GOLF.com’s executive editor, Bastable is responsible for the editorial direction and voice of one of the game’s most respected and highly trafficked news and service sites. He wears many hats — editing, writing, ideating, developing, daydreaming of one day breaking 80 — and feels privileged to work with such an insanely talented and hardworking group of writers, editors and producers. Before grabbing the reins at GOLF.com, he was the features editor at GOLF Magazine. A graduate of the University of Richmond and the Columbia School of Journalism, he lives in New Jersey with his wife and foursome of kids.

'I wouldn't have won': This pro avoided Tiger Woods … and won a major because of it