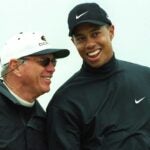 Butch Harmon and Tiger Woods once bet caddie Steve Williams on a feat of endurance.

To capture this Tiger Woods bet properly, we need to frame the arena in that fashion, too. If you’ve played the Plantation Course at Kapalua, you know. But if you haven’t, here are a few experts to say that calling the Hawaiian gem just “hilly” is, well, flat wrong.

From Mark Rolfing, a longtime broadcaster and Kapalua resident who was involved in the construction of the course, on Saturday’s Golf Channel broadcast of the third round of the Tournament of Champions: It’s “one of the toughest walks on the PGA Tour.”

From John Wood, a TV analyst and longtime caddie, who described the climb to the green on the par-5 9th this way on Saturday’s broadcast: “On that second shot, I always prayed my player would hit the green in two because if I had to give a number at the top of this hill, I need an oxygen tank. We’re looking at 12 degrees for about 80 yards with 45 pounds on your back. This is the first real knee-kisser, we used to call them as caddies; knee-kisser of a walk. Because your head is down, bag’s on your back, and all you’re doing is touching your knees the whole way up. You don’t want to see how much farther you have to go.”

And this from GOLF’s Josh Sens, who wrote the following after touring the course a few years back: “You hear it every year when the Masters rolls around: Television flattens courses. Maybe so. But there’s no disguising the rise and fall of the Plantation Course, which features more dramatic elevation changes than any stop on the PGA Tour, with holes that swoop along the shoulder of the Kahalawai Mountains. The high point of the course is 510 feet. It’s also an expansive property, with a footprint of roughly 316 acres (including the gorges that the routing works around). For comparison, the Tour’s next stop after Kapalua will be the Sony Open at Waialae Country Club, on Oahu, which covers roughly 120 acres and has a maximum elevation change of about 10 feet.”

So, yeah, it’s hilly hilly. With that comes this wager of endurance a few years back from Woods and his former swing coach, Butch Harmon, to his former caddie, Steve Williams. Wood shared it on the Saturday Golf Channel broadcast.

“We talked a lot about how hilly this course is, and back in the day, Tiger and his caddie, Steve Williams had a little bet,” Wood said. “Steve said he could run the back nine touching every tee box and every green in less than a half-hour. So he bet Tiger, and he bet Butch.”

“And I emailed Steve the other day just to get the idea what he actually did it in. He said he touched every tee box and every green and did it in 28 minutes.”

And just how good is that, Rolf?

“I can’t drive a cart around that fast,” he said on the broadcast.

While Woods is not as synonymous with wagers as, say, Phil Mickelson, he’s still been a player in a few bets in his time. Which brings to mind a recent gem from musician Kenny G, who shared it on the Fore Play podcast. Woods and Kenny played a putting contest at Pebble, Kenny lost on the last hole, and he owed Woods $20. From there, Kenny tells it well.

“I said, great, that was fun. Here’s your 20, Tiger,” Kenny said on the podcast. “He goes, no, no, no, don’t worry about it, you can pay me some other time. I said, wow, Tiger, awesome. So I walk around and then I see Butch Harmon. I said, Butch, I just had this putting contest with Tiger, and I only lost 20 bucks. And he goes, he wants you to owe it to him, doesn’t he? I go, what? He goes, he wants to hold that against you. Here’s what you do — this is Butch telling me.

“So I’m nervous, but I walk up behind Tiger, stuffed the money into his back pocket and he looks around at me and I go, hey, f— you,” the musician said on the podcast. “And he looks at me and goes, hey, that’s a good one. Good job, bro.”