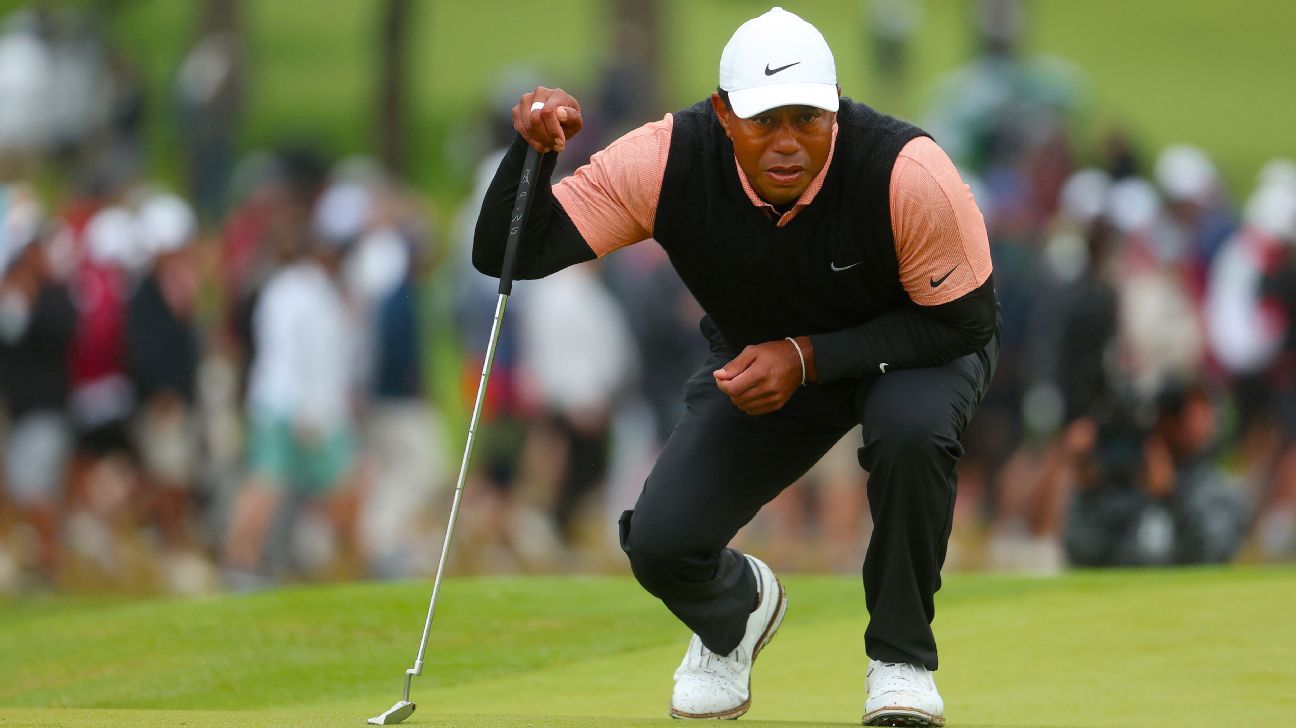 TULSA, Okla. — Tiger Woods withdrew from the PGA Championship after posting his worst score in the event on Saturday.

After carding a 9-over 79 in the third round, Woods told a pool reporter at Southern Hills Country Club that he was going to assess whether to return to the course and play the final 18 holes on Sunday.

“Well, I’m sore. I know that is for a fact,” Woods told a pool reporter. “We’ll do some work and see how it goes.”

With temperatures dropping into the mid-50s, rain falling and winds howling, conditions were difficult for nearly everyone on Saturday. But especially for Woods, 46, who is playing in just his second tour event since he was seriously hurt in a car crash in February 2021. Temperatures were expected to be cool again on Sunday.

After making five consecutive bogeys in a major for only the second time (along with the first round of the 1996 U.S. Open), Woods made his only birdie of the round with a 37-foot putt on the par-4 15th.

He ended the third round tied for 76th, at 12 over, and was 21 shots behind leader Mito Pereira. It is the first time Woods has withdrawn from a major championship as a professional. He pulled out of the 1995 U.S. Open with a wrist injury after the second round as an amateur. It is the first time he has withdrawn from a PGA Tour event since he exited after shooting 75 in the opening round of the 2019 Northern Trust.

Woods has been noncommittal about playing in the next major, the U.S. Open, which is scheduled June 16-19 at The Country Club in Brookline, Massachusetts. Woods, a 15-time major champion, has said he planned to play in the 150th Open Championship at St. Andrews in Scotland on July 14-17.

Woods struggled mightily while playing in cold weather at both the Masters and the PGA Championship. After making the cut at Augusta National in April, Woods posted scores of 6-over 78 in each of the last two rounds, his worst scores in his career there.

According to ESPN Stats & Information research, Woods played 321 rounds in majors from 1995 to 2020, and posted just five scores of 78 or worse. He has three such scores in seven rounds in majors this year.

With an additional five weeks for his leg to heal and get stronger, Woods was hoping for better results at Southern Hills. But he struggled in the two rounds in which he had morning tee times. Saturday’s dramatic weather change didn’t help his chances.

“You know, he’s such a phenomenal player,” said South Africa’s Shaun Norris, who played with Woods on Saturday and shot a 4-over 74. “You feel sorry for him having to go through this. But then again, you also see the type of person he is, that he grinds through everything and he pushes himself through all of the pain. It’s not easy to see a guy like him have to go through that and struggle like that.”

Pereira, backed by late birdies, leads by 3 at PGA

Tee times for the final round of the 2022 PGA Championship