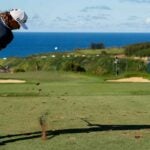 Cameron Smith hits his tee shot on Friday on the 11th hole on the Plantation Course at Kapalua.

Cameron Smith hit his drive right on the 18th, and he began to lean left, hoping his mind and body from about 300 yards away could somehow steer his ball to safety. A couple seconds later, it kicked out of trouble and eventually settled near the middle of the fairway. “He definitely got away with one,” analyst Curt Byrum said on the Golf Channel broadcast. On Friday, everything the Australian did, hitting the ball, putting it and using the force on it, worked. Here are three things you need to know after the second round of the Tournament of Champions at the Plantation Course at Kapalua in Hawaii.

But drop those, and he’s played to a 20-under total. In all, he shot a nine-under 64 on Friday, and he’s at 17-under, which is three shots ahead of world No. 1 Jon Rahm and Daniel Berger.

“Yeah, a few bad shots there the first couple of holes,” Smith said. “I didn’t really feel that comfortable on the range this morning. Yeah, and it kind of showed those first couple. Yeah, figured it out by the 4th or 5th and was able to get on a bit of a roll with the putter as well.”

Jon Rahm and Daniel Berger are tied for second

“It was really good tee to green,” Rahm said. “If there’s anything to put an asterisk on, it’s maybe putting.”

Patrick Cantlay is four back

Four back of the lead is Cantlay, and Hideki Matsuyama and Sungjae Im are five behind Smith. At 11-under is Kevin Na.

Among other players, Brooks Koepka and Xander Schauffele are at 10-under, Bryson DeChambeau is at 9-under, Collin Morikawa and Viktor Hovland are at 8-under, and Phil Mickelson and Jordan Spieth are at 6-under.

Smith recovers from rocky start, up 3 at Kapalua

Golf and the Beatles? The intersection is surprisingly rich. Ask Nick Faldo.