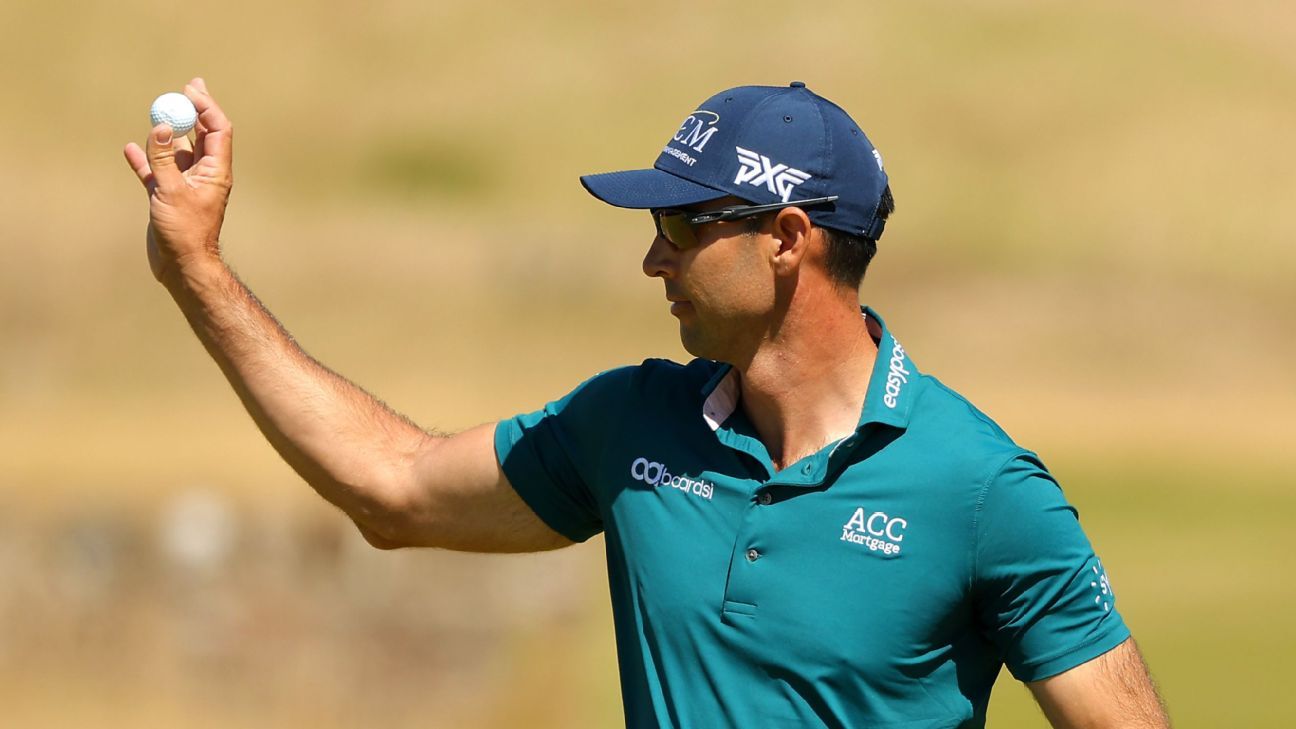 NORTH BERWICK, Scotland — Cameron Tringale has played 331 times on the PGA Tour without winning. His career-best round of 9-under 61 might help him change that at a tournament run by the European tour.

Tringale ran off six straight birdies to start the back nine at The Renaissance Club on Thursday and had a 3-shot lead in the Scottish Open, the first European event co-sanctioned by the PGA Tour.

Former U.S. Open champion Gary Woodland saw work with putting coach Phil Kenyon pay off in his round of 64, the only one close to Tringale.

“I haven’t had a professional win on my own, and obviously Scotland is where golf started, so this place is special,” Tringale said.

And it was relatively benign, at least for Tringale. That wasn’t the case Thursday afternoon, when the average score was more than 3 shots higher.

Flags were crackling in 30 mph gusts that felt even stronger along the shores of the North Sea, conditions best described by the clubs that were used.

Some players barely reached the fairway on the par-5 16th, if they did.

Patrick Cantlay had 231 yards for his second shot on the 483-yard closing hole. He hit 3-wood, and even that wasn’t enough. Cantlay did well to close with three straight pars, which were at a premium. He had a hard-earned 70.

U.S. Open champion Matt Fitzpatrick opened with 71, while PGA champion Justin Thomas held on as long as he could. Thomas bogeyed three of his last five holes for a 73.

Tringale had the lowest score of his PGA Tour career and matched the course record set three years ago by Bernd Wiesberger when The Renaissance played to a par 71.

That took some of the attention away from an early contender, Justin Harding. The South African was among four players added to the 156-man field by winning a temporary stay against the European Tour suspending him for playing a Saudi-backed LIV Golf event outside London without seeking a release.

Harding was in the first group off as a twosome with Adrian Otaegui of Spain, another LIV Golf player who asked a court for the stay.

“I’m trying my best to just play golf, put food on the table,” said Harding, the No. 114 player in the world who has made just over $1.1 million in two LIV events. He said he has not signed a contract with LIV Golf and was invited through his ranking.

“I was a little upset I was told I could not play. I have supported the European Tour for a long period and I’m happy to continue to do so,” Harding said. “There’s times when it’s a little uncomfortable, but we have to look after ourselves.”

Jordan Spieth set an early pace by running off five straight birdies, only to drop 3 shots over his last 10 holes for a 68. He called it a tale of two nines based on course knowledge.

“The nine I had never seen before went really well, and the nine I played yesterday went poorly,” Spieth said, who is playing a week before the British Open for the first time since 2015, the last time the Open was at St. Andrews.

It made sense this year with the PGA Tour co-sanctioning the tournament for the first time, which led to 14 of the top 15 in the world at The Renaissance, a course that looks like one and is plenty fast without having true links soil.

Tringale, who has reached the Tour Championship only once in his 12 previous years on the PGA Tour, is having one of his better years. He missed a playoff at Torrey Pines by 1 shot and was a distant runner-up to Hideki Matsuyama in the Zozo Championship last fall.

The conditions along the North Sea could not have been more ideal for him, with only a mild breeze and a full blue sky in the morning. Tringale took advantage with one key club in his bag.

“Golf is more fun when the putts are going in, and they were for me today,” he said.

He made a pair of birdie putts from the 40-foot range, and only four of his nine birdies were inside 6 feet. Equally important were a few midrange par putts he made at the start.

It was a struggle for Masters champion Scottie Scheffler, who made double bogey from the 18th fairway by going from rough to rough, and lost more ground on the front nine for a 73.

The Scottish charge was led by Ewen Ferguson (67) and Russell Knox (68), who heeded some strong advice from his wife, a former tennis pro. Knox has been struggling with his putter but he was persuaded to try a long putter.

“My wife said, ‘You’ve been playing professional golf for 15 years and you’re horrible at putting. Try something different,”’ Knox said. “The best putt of my life was a 3-footer for par on the first hole because if that didn’t go in, we were in for a long day.”

Berger out of the Open, replaced by Theegala