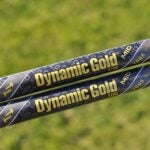 SAN DIEGO — The introduction of low-spin golf balls has made it easier for pros to chase extra distance in the driver. But what happens when you don’t want low launch and spin in the irons?

True Temper’s solution to the problem is a new Dynamic Gold Tour Issue Mid prototype design that was introduced to players for the first time at the Farmers Insurance Open. (For the moment, only 50 sets are available to test, along with a handful of 6-iron shafts for demos.)

“A lot of this was predicated around the ball design of today,” said Paul Loegering, True Temper’s Tour manager. “So the high clubhead speed guy doesn’t want to give up his high launch, low spin with the woods, so then they’re having this void with how we can fix it.”

This isn’t the first time True Temper has created a high launch product. Elevate Tour was designed to generate similar launch characteristics, but the lighter overall weight made it difficult to get in the hands of pros.

“The easiest way to increase launch is to take weight out of the shaft,” said Don Brown, True Temper’s VP of marketing and innovation, “but at 120 grams, most guys out here are going to say it’s too light.”

Instead of stripping weight from the shaft, the midsection was reinforced and the taper rate changed in the tip section to induce a higher launch. According to Brown, golfers will see roughly 10-15 feet of additional peak height at the same weight (130 grams) as the original Dynamic Gold Tour Issue X100.

“It’s incremental, more launch and more spin, but you couple those two things together and the ball gets up in the air and lands steeper,” Brown said.

True Temper spent the last year developing Dynamic Gold Tour Issue Mid X100 and went through five different prototypes before landing on the version shown to pros — a number that might seem a light until you realize the effort that goes into creating a single steel prototype.

“Five different versions doesn’t seem like a lot,” Brown said. “But think of it this way: When you’re talking about a graphite shaft, you can make a version in a couple of days and it’s out the door. It’s six weeks from start to finish on a steel prototype. So for those five, it’s half the year.”

Dynamic Gold Tour Issue Mid X100 is a Tour-only product for the moment, but depending on how it performs on Tour, there’s a chance it could make its way to retail later this year.