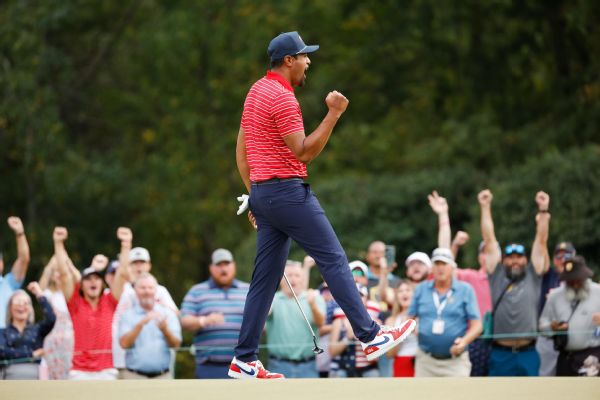 Sure, the International team lost at least four players — maybe more — who defected to Saudi-funded LIV Golf and were deemed ineligible by the PGA Tour. It had eight rookies asked to play a new format before 40,000 flag-waving fans chanting for the home team. And the Internationals have never won on American soil since these lopsided matches began in 1994.

The Americans are tough to beat right now in any cup, under any circumstances.

Jordan Spieth made putts from all over Quail Hollow and capped off a 5-0 week, Xander Schauffele delivered the cup-clinching point and lit up his big cigar, and the Americans won the Presidents Cup for the ninth straight time.

“I think that the biggest challenge for us this week was staying within ourselves and not letting the outside noise get to us,” Spieth said. “We saw notes … put up all over the place that we were supposed to win and we’re favorites and all that.

“What was so cool — which has been very consistent in the previous few Cups that I’ve been involved in — is everyone’s really, really good at what they do.”

The plucky International team still made them work for it. Spieth and Patrick Cantlay were in control of their matches and set the tone. Even so, the Internationals kept it interesting, a resilient effort considering they were down 8-2 going into the weekend.

But then Tony Finau flipped his match, Collin Morikawa played like a two-time major champion, Schauffele delivered the winner and another celebration was on.

International captain Trevor Immelman referred to the LIV disruption as one of many hurdles facing his team. And he reacted strongly to any notion his 12 players — only three of them among the top 25 in the world — never had a chance.

“When you consider that we were 8-2 down on Friday evening, this team is no joke, and I’m sick and tired of it being spoken of as a joke,” Immelman said. “We love this event, and we love our team. And we cannot wait to run this back and have another shot.”

The Internationals showed plenty of fight. They just don’t have a cup to show for it. That stays squarely in the hands of an American team that was coming off a record romp over Europe in the Ryder Cup last year before another one-sided crowd.

Even the American newcomers produced, starting with Max Homa. He rallied from 3 down by winning four straight holes and then holding off Tom Kim for a 1-up victory that gave Homa a 4-0 week in his Presidents Cup debut.

U.S. captain Davis Love III paid tribute to Immelman for having to fill out his team three weeks ago after British Open champion Cameron Smith and Joaquin Niemann were among the latest batch to join the rival LIV Golf series. This was a mismatch. The Internationals still made a game of it, and at one point the matches were tight enough that a shocker at Quail Hollow was still possible. But they needed everything to go right, and it didn’t.

“Trevor and his team did an incredible job of rising to the occasion,” Love said.

Love had all 12 players ranked among the top 25 in the world ranking, and just like last year at Whistling Straits in the Presidents Cup, most of them played like it.

Spieth was in the second match out and made putts from 25 feet, 20 feet and 30 feet for par after driving into the water and 45 feet that made Cam Davis feel hopeless. He closed out the Australian on the 15th hole.

Spieth, a three-time major champion and former No. 1 player in the world, first qualified for U.S. teams when he was 20. But he had never won a singles match — 0-3 in the Presidents Cup, 0-3-1 in the Ryder Cup. And then he fell 2 down after two holes before turning it around in a big way.

“I was more nervous than I should have been because I wanted to get that monkey off my back,” Spieth said. “When you get off early on a Sunday, they’re looking for red on the board. And it feels good to provide it.”

Thomas was trying to join him, but he lost to Si Woo Kim in a match that came down to 10-foot birdie putts on the last hole.

Cantlay put red American numbers on the board quickly for a 3-up lead over Adam Scott and had lost only two holes in a 3-and-2 victory.

For Scott, it was another dose of disappointment. His first Presidents Cup was in 2003 in South Africa that ended in a tie. He has played on every team since then, all losses. Still, he saw enough out of the team and the shield on their shirts with which they are starting to identify to not lose all hope.

“It still hurts not to win,” he said. “I think the big difference I felt the last couple years is what’s going on in our team room, what’s going on between the captains and the players, the caddies, everybody involved on our team. I think good things are really starting to happen in that environment.

“A cup is coming our way soon.”