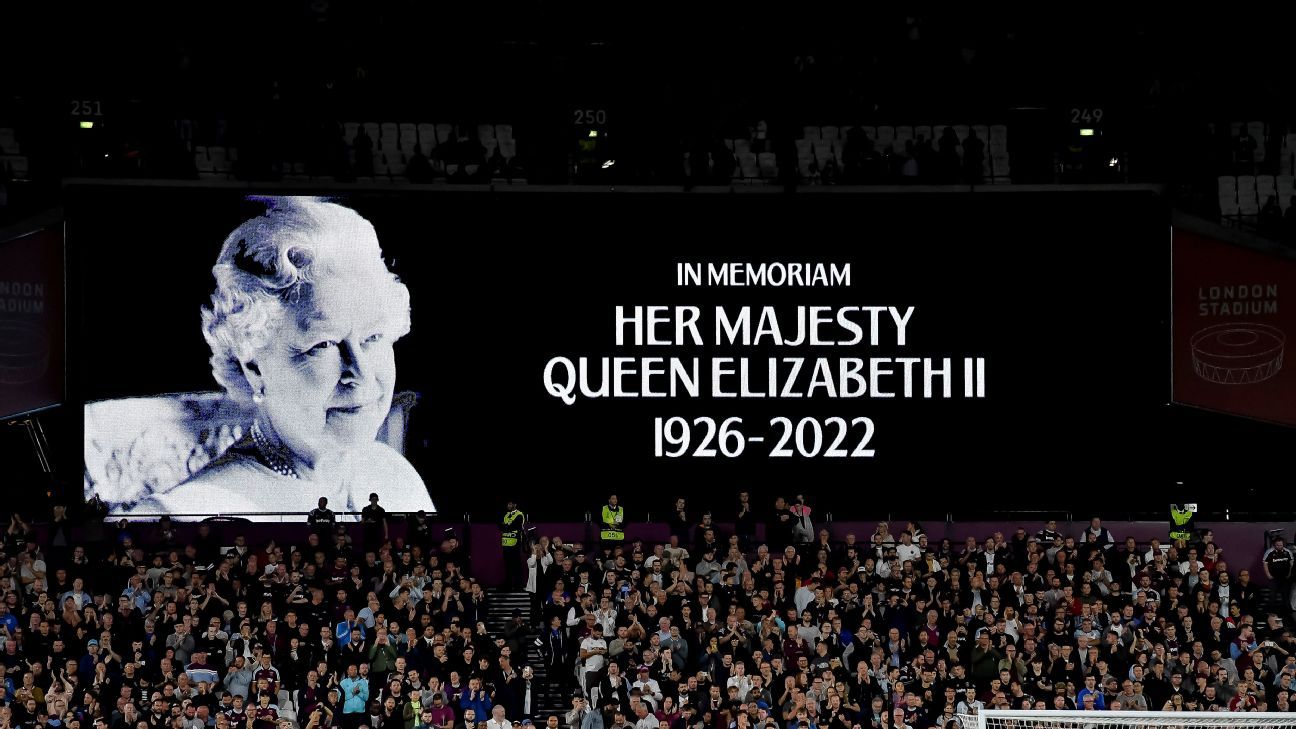 Several sporting events in Britain have been postponed as a mark of respect following the death of Queen Elizabeth II at the age of 96 on Thursday, with tributes made in her honour throughout the sports world.

On Friday, all football fixtures this weekend, including the Premier League, English Football League and Women’s Super League, were postponed.

The DP World Tour announced the BMW PGA Championship will resume on Saturday and will now be played over 54 holes after the event was was suspended on Thursday. Horse racing — a sport which the queen held close ties to — was halted on Friday but will resume Sunday.

Meanwhile, the British Board of Boxing Control announced all fights in the country this weekend have been postponed, including Saturday’s undisputed middleweight title fight between Claressa Shields and Savannah Marshall.

England’s cricket Test match against South Africa will resume on Saturday, the England Cricket Board have said, although it will not be extended as South Africa are due to leave the UK on Tuesday.

Premiership Rugby postponed two fixtures on Friday but will continue this weekend, the Rugby Football Union have announced, although domestic rugby fixtures in Wales have been cancelled.

Queen Elizabeth II, Britain’s longest-reigning monarch and a rock of stability across much of a turbulent century, died Thursday after 70 years on the throne.

The DP World Tour said in a statement: “The Wentworth event will give players, caddies, staff, volunteers and spectators the opportunity to come together across the weekend, not only to express their condolences but also to celebrate the extraordinary life of Her Majesty.

England’s Tommy Fleetwood and Andy Sullivan are tied for the lead in the BMW PGA Championship, having completed their first round at 8 under. There were 30 golfers still on the course when play was suspended.

“Although not a golfer, Her late Majesty’s 70-year patronage of the club was a great honour for its members. We hold His Majesty The King and all The Royal Family in our thoughts at this time of mourning.”

The Premier League is deeply saddened to hear of the passing of Her Majesty The Queen, Elizabeth II. Our thoughts and condolences are with The Royal Family and everyone around the world mourning the loss of Her Majesty. pic.twitter.com/UlaLXEOdke

Manchester United‘s Europa League game against Real Sociedad did take place hours after the queen’s death was announced. There was a minute’s silence before kickoff at Old Trafford, with both teams wearing black armbands and the flags at stadium lowered to half-staff as a sign of respect. There was no prematch music and the digital advertising hoardings around the field were switched off.

There was a minute’s silence in other European games involving British teams, such as Arsenal, West Ham United and Heart of Midlothian.

“Her deeds have marked generations,” Brazil football great Pele, who met the queen in person when she visited Rio de Janeiro in 1968, posted to Twitter. “This legacy will last forever.”

The US Open held a moment of silence Thursday night before the start of the women’s semifinal match between Ons Jabeur and Caroline Garcia.

“We would like to pause to remember Queen Elizabeth II,” the stadium announcer said. “Our thoughts are with the people today of the United Kingdom. Remember to be part of us in a second of silence.”

A moment of silence also was also held before Thursday night’s NFL season opener between the Los Angeles Rams and Buffalo Bills.

The All England Club said the queen undertook her duties “with great wisdom, dignity and charm for 70 years.”

She also was a big fan of horses, owning dozens of them, and attended races regularly, including the Kentucky Derby in 2007. Horse races in at least five different countries, including the United Kingdom and the United States, are named after her.

She first rode a horse at the age of 3 — and was immediately besotted with them — and would inherit the breeding and racing stock of her father, King George VI, when she acceded to the throne in 1952.

“My philosophy about racing is simple,” she said in a BBC documentary, “The Queen’s Racehorses: A Personal View.” “I enjoy breeding a horse that is faster than other people’s.

“And to me, that is a gamble from a long way back. I enjoy going racing but I suppose, basically, I love horses, and the thoroughbred epitomises a really good horse to me.”

The queen had approaching 2,000 winners as a racehorse owner, with her jockeys always wearing purple, gold and scarlet — the colours of the storied royal racing silks also used by her father and by her great-grandfather King Edward VII.

Her first winner was a horse called Monaveen, at Fontwell in 1949, and she went on to win all of the so-called “classics” in British horse racing except for The Derby, another event she attended for most of her life.

One of the queen’s most famous wins came at Royal Ascot in 2013 when Estimate became the first horse owned by a reigning monarch to win the prestigious Gold Cup. It was her first win in an elite race since 1989, and she was seen clapping enthusiastically as jockey Ryan Moore powered through to finish first by a neck in front of 61,000 racegoers.

The British Horseracing Authority announced all racing would be cancelled on Thursday, Friday and Saturday, with scheduled fixtures returning on Sunday.

It said, however, that the fixture scheduled at Musselburgh, Scotland, on Sunday would be cancelled “as a mark of respect for the fact that the queen’s body will be lying in rest in Edinburgh.”

The queen made a personal appearance at the opening ceremony for the 2012 Olympics in London.

Less than two hours after the announcement had been made about the death of the queen, the members of Great Britain’s basketball team took the court in a 90-56 loss to Italy in a EuroBasket game.

“I mean, she’s the only leader of our nation that we’ve known,” Great Britain forward Dan Clark said. “The amount of respect that she has and the way she’s carried herself as a leader for so many years and in such a long reign, it’s remarkable.”

Organisers of cycling’s Tour of Britain declared the race over after cancelling Friday’s stage as well as two more over the weekend. Gonzalo Serrano, who led after Thursday’s stage, was named the winner.

In a statement, Formula One sent “its deepest condolences to the Royal Family and to the people of the United Kingdom and the Commonwealth” and its drivers and teams held a minute’s silence ahead of practice for the Italian Grand Prix on Friday.

With the death of the queen, her son Charles automatically becomes monarch, even though the coronation might not take place for months. Royal officials said the 73-year-old had chosen to call himself King Charles III.

They said it! Patrick Beverley’s funny take on playing with LeBron James, plus more quotes of the week