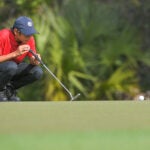 Charlie Woods had a custom putter made by Scotty Cameron well before he arrived at the PNC Father-Son last month.

Welcome to Wall-to-Wall Equipment, the Monday morning gear wrap-up in which GOLF equipment editor Jonathan Wall takes you through the latest trends, rumors and breaking news.

This one’s for you, kid

By this point, you’ve probably heard the story, but it bears repeating if you don’t follow Tiger Woods’ every move in the equipment space.

In the days leading up to the 2016 Hero World Challenge, the 15-time major winner was discussing his putter studio, when the conversation shifted to his putter collection. More specifically, the putters a young Charlie Woods was allowed to roll putts with in the home studio.

“Charlie knows there are two putters he can’t touch,” Woods said. “There’s the black one I won with the Teryllium insert. I won the Masters in ’97 with it and this Scotty Cameron. They sit next to each other. Touch any other putter, do anything you want with any other putter. But these putters are off-limits.”

In other words: Sorry, Charlie.

Scotty Cameron still recalls Woods’ answer to the question — and what he did next for Charlie.

“The next day, I went to the shop and created a putter for Charlie,” Cameron told GOLF.com during a recent putter chat. “On the sole, I stamped: By Scotty, Made Only for Charlie.”

Cameron confirmed it was not the putter Charlie used just last month at the PNC Championship, but a production model with his name stamped on the head. Even still, the putter represented three generations of Woods who’ve used his putters going back to when Tiger put one in play for the first time in the mid 90s.

“I turned 60 this year, which blows my mind,” Cameron said. “In addition to Tiger, I remember making putters for Earl. [Tiger] and I would be hanging out in the shop, and he’d ask me if I could make a putter for ‘Pops.’ That’s now three generations of the Woods family.”

According to Cameron, he had no idea Charlie was going to show up with one of his putters until early in the week at the PNC Championship when he received confirmation from his Tour team that the youngster was carrying a backup version of Tiger’s famed Newport 2 GSS.

“I asked them if it was the putter we made for Charlie, and they confimed it was one of Tiger’s backups,” Cameron said.

From there, Cameron’s Tour team took the putter to the truck, where it was cut down to Charlie’s length and a new grip was added. Slight modifications were also made to the head to make it feel heavier due to the shorter length.

“You don’t hand down irons, wedges or drivers — but you do hand down putters,” said Cameron. “For that to happen naturally — it wasn’t forced — was so cool.”

A secret no more

Speaking of Cameron, the putter designer unveiled a new Phantom X putter at the Sony Open. The overall look is Futura-esque, but shaping falls more in line with what we’ve seen from the recent Phantom X line extension.

Cameron usually offers gearheads a peek at the upcoming retail line when the Tour restarts in Hawaii, so expect to hear more about these putters in the near future.

Getting staff players into new product isn’t groundbreaking news. Of course, not every staffer is going to immediately make the jump, which is why Callaway PGA Tour manager Jacob Davidson took Kevin Kisner’s positive remarks with a grain of salt when he started testing a Rogue ST Triple Diamond LS driver.

In the first two weeks of 2022, Callaway has already seen 78 percent of its staff players convert to a Rogue ST driver, but Kisner’s acceptance might be the most important of all. Before this year, Kisner was still relying on a 2015 Great Big Bertha driver off the tee — a club that’s played a part in all four of his Tour wins.

“To get that old driver out of his hands, we’ve struggled with that,” Davidson said. “For him, he does not you to do anything to the driver. He doesn’t like for you to move the cog settings around, add glue or move weight drastically. In his mind, it’s a great driver if you can stick it in there off the shelf. He’s so simple that way. He obviously played his best golf with that older driver, so there wasn’t really a need to switch.”

When Davidson sent Kisner a Rogue ST Triple Diamond LS driver to test, he was sure the feedback would be mixed. Then came the text that threw him for a loop.

“His feedback was he hit it out of the dead center at a higher clip, and when he didn’t, it still performed like it was supposed to, so his misses were tighter downrange,” Davidson said. “It was all positives. I still wasn’t completely sold, and then he sent me a text that said, ‘Merry Christmas, this driver is the best Christmas present you’ve given me in a long time.’ He’s excited about it. It’s a good validation for a guy who’s tough to convert.”

Kisner has looked good in his first two starts with the 9.5-degree driver, finishing T8-XX during the Hawaiian Swing.

TaylorMade saw 19 pros put a Stealth driver or fairway wood in play during the first full-field event of 2022, including 13 not currently under contract.

Quick-hitters: For the 25th time since the start of 2019, Titleist led every major equipment usage category at the Sony Open. … Get the scoop on Mizuno’s ST-Z 220 and ST-X 220 drivers, fairways and hybrids. … Brooks Koepka’s Srixon Z-Star Diamond golf ball is now a retail offering. … Adam Svensson finished T7 the same week he put a new Callaway Chrome Soft X golf ball in play.

'It stings': For Russell Henley, a Sunday 65 wasn't good enough