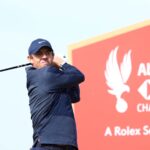 Rory’s new Stealth Plus driver allows him to shape the ball off the tee.

Welcome to Wall-to-Wall Equipment, the Monday morning gear wrap-up in which GOLF equipment editor Jonathan Wall takes you through the latest trends, rumors and breaking news.

Rory McIlroy has a statistical goal for 2022, but it’s not one that’s been on his list of goals since he turned pro.

As one of the longest hitters in professional golf, McIlroy revealed he’s hoping to replace bombs off the tee with more fairways during the season. A lot more fairways, in fact.

“I think the fairways hit stat is always a big one for me,” McIlroy said. “If I can hit the ball in the fairway 60% of the time, with how far that I hit it, I’m going to create a lot of opportunities for myself, and the more opportunities you give yourself, you know, the putts will — some weeks they’ll fall, some weeks they won’t, but I think over the last few years I’ve certainly become a more consistent putter and I certainly hole what I feel is my fair share.

“… Again, that goal of hitting more fairways, it means maybe throttling back and hitting 3-wood a little more often or hitting clubs that are maybe not as aggressive off tees and just putting yourself in the fairway. Maybe just being a little bit more of a measured and a controlled golfer.”

McIlroy pointed to one golfer in particular who’s had success picking his spots by playing a “controlled game” during his career: Tiger Woods. The 15-time major winner was one of the longest on Tour, but he always had the ability to throttle back and shape the ball into the fairway, when necessary.

“I’ll certainly pick and choose my spots where I can take advantage of the driver and hit it, but the best player of the last 30 years, Tiger, he picked and chose where he hit driver, and he played a very, very controlled game. It didn’t work out too badly for him.”

It’s never a bad idea to emulate Tiger, but McIlroy’s rarely been the type of golfer to lean on different shot shapes off the tee. McIlroy played a fade much of last year, but things changed when he started testing a 9-degree TaylorMade Stealth Plus driver. According to TaylorMade reps, McIlroy noted having the ability to shape the ball more with the Stealth driver in his hands — something Tiger has been able to do with his driver in recent years.

It also helped that McIlroy’s dispersion and spin numbers remained consistent and tight during testing — with the fade shot coming in at 2,400 RPMs, the straight ball at 2,200 RPMs and the draw at 2,100 RPMs.

In Abu Dhabi, McIlroy’s new shot-shaping was on full display off the tee in blustery conditions. If he can somehow find a way to remain long and consistent for extended stretches, watch out. It could be a deadly combination.

It started with a few putts on the practice green on Tuesday at PGA West and eventually turned into a request to get his preferred grip — Scotty Cameron Matador Mid — added to the Scotty Cameron Phantom 7.5 Tour Prototype. The following day, Hudson Swafford told Scotty Cameron Tour rep Drew Page the putter was in.

It didn’t take Swafford long to put the putter to work — and find the winner’s circle. The heel-shafted mallet played a major role in Swafford’s third Tour title as he rallied on Sunday for a two-shot win at the American Express Championship.

“The first time he put it down, the putter just set up perfect for him,” said Page. “He was really impressed how it sat on the ground, and thought it looked great. It’s been the same story for many players who’ve put Phantoms in play. ‘Man, this thing sets on the ground perfect. I really like the way it looks.’ He rolled a few putts with it on Tuesday, I just threw his grip on and it went into play.”

Cameron debuted the Phantom X 7.5 at the Sony Open, where it saw action the first week. For Swafford, it was a combination of the stability and heel-shafted design that sold him on it. “The heel-shafted putter helped me swing a little bit more,” he said, “and rolled it incredibly well. … Oh, man, I rolled it really good this week.”

Swafford wasn’t kidding. He finished the week ranked second in the field in Strokes Gained: Putting, picking up a combined 6.402 shots on the competition with the putter.

A return to firmer turf conditions in Abu Dhabi saw Collin Morikawa revert to the same TaylorMade P7MC iron setup (5-9) — he added only the 8- and 9-iron — he used to win last year’s Open Championship. As Morikawa learned in the week leading up to the Open, marginal differences in sole geometry can make a big difference in how he strikes the ball and interacts with the turf.

In the case of P7MC, the iron features a sharper leading edge than the P730, with marginally less bounce.

Some players rely on different wedge setups to handle specific grasses and course conditions. For Morikawa, it’s different short irons to give him the best possible chance to attack the flag.

Expect him to go back-and-forth between the two iron setups during the season.

Making putts is the name of the game, but there’s something to be said for having a putter that shortens your second putt. For Francesco Molinari, he found a worthy fit in Odyssey’s Tri-Hot 5K One that allowed him to bury more putts while tightening dispersion at the same time.

“In talking with [Francesco] and [coach] Phil Kenyon, we knew he has a push-bias tendency when he misses,” said Odyssey Tour rep Joe Toulon. “Tri-Hot has a more forward CG which we’ve seen result in a little more face rotation for most players. Fran was one of those players.”

During the initial testing session, Molinari found he was able to square up the face more consistently at impact, which in turn reduced the length of his misses. The Italian enjoyed a strong first week with the putter as he ranked 20th in SG: Putting en route to a T6 finish.

Adam Scott wasted little time putting his newfound equipment free agency to use in Abu Dhabi. The former Masters champion was spotted using a LAB Golf Directed Force 2.1 mallet — the same profile he used for a brief period in 2019.

The putter is designed to reduce head twisting through a lie-angle balanced design that keeps the face straight to the path during the stroke. It’s the first gear change Scott’s made since he chose to replace his Titleist brand ambassador deal with a ball, shoe and glove agreement.

“To be honest there was a little bit of equipment in the fiddling in the middle of last year,” Scott said, “and a couple of things happening certainly compounds things. The game feels easier again, so that’s nice.”

New kid on the block

Wyndham Clark made the jump from PXG to Titleist at the American Express Championship, where he was officially announced as the newest brand ambassador. The 28-year-old finished 13th in the desert — his best finish this season — with a full bag of Titleist gear, including Vokey’s new SM9 wedges (46.10F, 52.12F, 56.10S and WedgeWorks 60A).

“These are incredible,” Clark said of the wedges. “Vokey’s done a great job in creating a wedge that launches at the launch you want, which is kind of a lower launch, but with a ton of spin. And that’s what all of us out here strive and try to get with our wedges is that lower launch that fights through the wind. But then when it lands, it is really receptive.”

On the court, Stephen Curry is lethal. On the course? He’s scoring just about everywhere

Can the Titleist Vokey SM9 wedge outperform the SM8 in a head-to-head showdown?