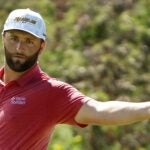 Jon Rahm after a missed putt during Sunday’s final round of the Tournament of Champions.

Dateline, Kapalua, Hawaii. Jon Rahm, behind no round worse than seven-under 66, and after a third-round 61, the best score ever on the Plantation Course at Kapalua, won the Tournament of Champions behind a 33-under total, the lowest 72-hole score in relation to par in the history of the PGA Tour. One stroke behind, in second, was Matt Jones, whose 32-under total also bested the previous scoring mark.

You deserve it, fellas. Your very own, GOLF.com winner and runner-up lead. Print it out and hang it on the fridge if you like.

For every year since 1950, that first paragraph (or something more eloquent, of course) would have gone down as the record of this PGA Tour tournament. No player, over those 72 years, had gone as low as Rahm and Jones did this week at the TOC. Of course, we know what actually happened.

Cameron Smith shot 34-under. And this:

Dateline, Kapalua, Hawaii. Jon Rahm, behind no round worse than seven-under 66, and after a third-round 61, the best score ever on the Plantation Course at Kapalua, won the Tournament of Champions behind a 33-under total, the lowest 72-hole score in relation to par in the history of the PGA Tour. One stroke behind, in second, was Matt Jones, whose 32-under total also bested the previous scoring mark.

And so it will be written as Rahm finishing as runner-up — with the second-best 72-hole score in relation to par since 1950. And the first week of January of 2022 will be remembered as Jones finishing third — with the third-best 72-hole score in relation to par since 1950. The strangest thing. And since losing with a score that any other week would have beaten everybody else has never, ever been done, it naturally leads us to this obvious question:

At least to the reporters gathered, happy. And sad. A bittersweet feeling. Resigned. As expected. With Kapalua playing soft — the course had reportedly received a foot (!) of rain last month — and the wind reduced to a kiss on the cheek, Rahm and Jones suggested that this odd outcome was a possibility. In a way, it was like losing 6-under to 5-under. But birdie-er.

“Well, this golf course only has one defense, and that’s the wind,” Rahm said. “If people are shooting between 20- and 26-under with 20-mile-an-hour winds, what do you expect us to do when there’s absolutely no wind? Maybe, maybe getting to 10 miles an hour gusting every so often, right?

“I think that’s the difference. I’m not surprised. When it comes to records, I think, what was it, Jordan [Spieth] shot 30, D.J. [Dustin Johnson] shot 31, and Ernie [Els] shot 31, right? And all three of them won by a margin. It’s kind of weird when you look forward in the records that there’s two of us that beat that score and lost by one and two. So, you know, I know we did a really good job and we shot low, but I think those 30- and 31-unders deserve a lot more credit than my 33-under.”

Said Jones: “I mean, it just goes to show the depth of the PGA Tour and how good the players are. If you told me I would have shot 32-under I would have been more than happy to sit in the clubhouse and let everyone play and see what happens.”

Rahm continued Jones’ point. Which was essentially a play on the old Tour slogan: These guys are good. Except now, maybe even greater, according to Rahm. He was asked the following question:

“We know what happened out here today, with as good as you guys are and perfect conditions. For people who go crazy looking at the number of scores under par, is this something they should be getting used to when you have weather like that, just considering the fact there’s so many good players?”

“Well, that’s it,” Rahm said. “I know who you’re referring to, right? You have what’s probably a lot of purists of the game who are probably going, Oh, you got to roll the ball back, shorter drivers, do this, do that.

“The simple fact is since Tiger [Woods] started playing golf, you are getting people that take this game a lot more seriously. Everybody thinks about it more like athletes. So the level of the game of all of us, it’s a lot higher than it used to be.

“Not to take away anything from anybody — Tiger’s an amazing player, and he was better than all of us have ever been — but overall I think the average player, it’s a better golf player. And when you come to a golf course where the only defense is wind, just, at least you expect 20 miles an hour here, and we usually shoot 20- to 26-under and win the tournament.”

Said a reporter: “And not so soft either, I would think.”

“Exactly,” Rahm said. “And you get the same golf course with no wind, what do you expect? You have 50-yard fairways, soft greens, we’re going to shoot low.