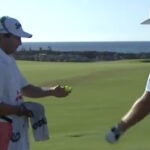 Ernie Els, his caddie and a rules official on Friday on the 16th hole at Hualalai Golf Course.

But only Ernie Els was able to crack a smile. And Padraig Harrington did not.

At tournaments some 9,000 miles apart, over the course of about 12 hours, rules that govern cracks in gear were in play both late Friday and early Saturday ET, and they defined what is — and isn’t — allowed for damages. Crack one came during the second round of the Mitsubishi Electric Championship, the season opener on the Champions Tour, when Els hit his tee shot right on the 16th at Hualalai Golf Course, the ball banged off lava, and it settled just in play. An official was called.

And Els was allowed to change out his golf ball. In play was Rule 4.2c, which states: “You may only substitute another ball (by replacing it on the original spot) if it can be clearly seen that your original ball is cut or cracked and this damage happened during the hole you are playing — but not if it is only scratched or scraped or its paint is only damaged or discoloured.”

“If there’s a hole in it, or a cut in it, then it’s damaged,” official Joe Terry was overheard saying on the Golf Channel broadcast. “And this one has been pierced. It’s quite evident that you can see. You may take it out of play.”

Crack two came during the Abu Dhabi HSBC Championship, the season opener on the DP World Tour (the formerly named European Tour). According to a tweet from Harington, he had played the first 10 holes of his third round at Yas Links, then, on the par-5 11th, saw that his driver was cracked. A ruling was called for.

And Harrington had to keep playing with the club. In play was Model Local Rule G-9, which states: “If a player’s club is “broken or significantly damaged” during the round by the player or caddie, except in cases of abuse, the player may replace the club with any club under Rule 4.1b(4). … A club is “broken or significantly damaged” when: the shaft breaks into pieces, splinters or is bent (but not when the shaft is only dented); the club face impact area is visibly deformed (but not when the club face is only scratched); the clubhead is visibly and significantly deformed; the clubhead is detached or loose from the shaft; or the grip is loose.

“Exception: A club face or clubhead is not “broken or significantly damaged” solely because it is cracked.”

And Harrington played on. Six of his remaining eight holes were non-par-3s, and he hit five fairways, missing only the 11th, where he first noticed the crack.

“Another strange ruling today,” Harrington tweeted. “I realized the face of my driver was cracked on the 11th tee. I was not  allowed change it as it wasn’t cracked enough to be out of shape. Drove it well enough for  last 8 holes. I’ve got a replacement head ready to go. @DPWorldTour #ADGolfChamps”