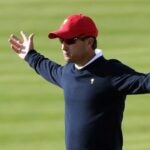 They play only on special occasions now. Even Tuesday cash games on the PGA Tour can’t win a second or two from the pocket of Father Time.

“I don’t really play on Tuesdays anymore, to be honest with you,” Kevin Kisner said. “I play the pro-am, and that’s about it. I always like to play with the young guys — they’re not young anymore. Jordan [Spieth], JT [Justin Thomas] and Rickie [Fowler], I love playing with them. I love playing with GW [Gary Woodland].

But when they do get together, they get their money’s worth. Not to mention each other’s money. Which begged this important question from Drew Stoltz, co-host of GOLF’s Subpar podcast, where Kisner appeared as a guest on this week’s episode:

“Who’s the guy you enjoy taking money, though, from if you do play a money game?” Stoltz said. “The guy he hands you a 100 bucks, 20 bucks, whatever it is. Who’s the guy you get the most satisfaction from taking it from?”

Kisner answered as quickly as the player in question apparently pays up slowly.

“Yeah, he’s got a couple hundos to give. He’ll be all right,” Stoltz said.

“Yeah, but he’s so sketchy about it,” Kisner said. “Like he never wants to pay on time. But if he wins, he wants his cash right then.”

“Yeah, I know a few of those guys,” Stoltz said.

Knost then brought up Charley Hoffman, who he said would have been his guess.

“Oh, god, that’s a good one,” Kisner said. “I didn’t think about that. I would probably actually put Charley in front of Jordan, now that you mention that.”

“I play all the time with Charley, and he’s hilarious, man,” Kisner said.

Gimme that: These golf-scented candles will bring joy to your offseason

He held the lead at a major. He went viral. He disappeared. Now he's back.