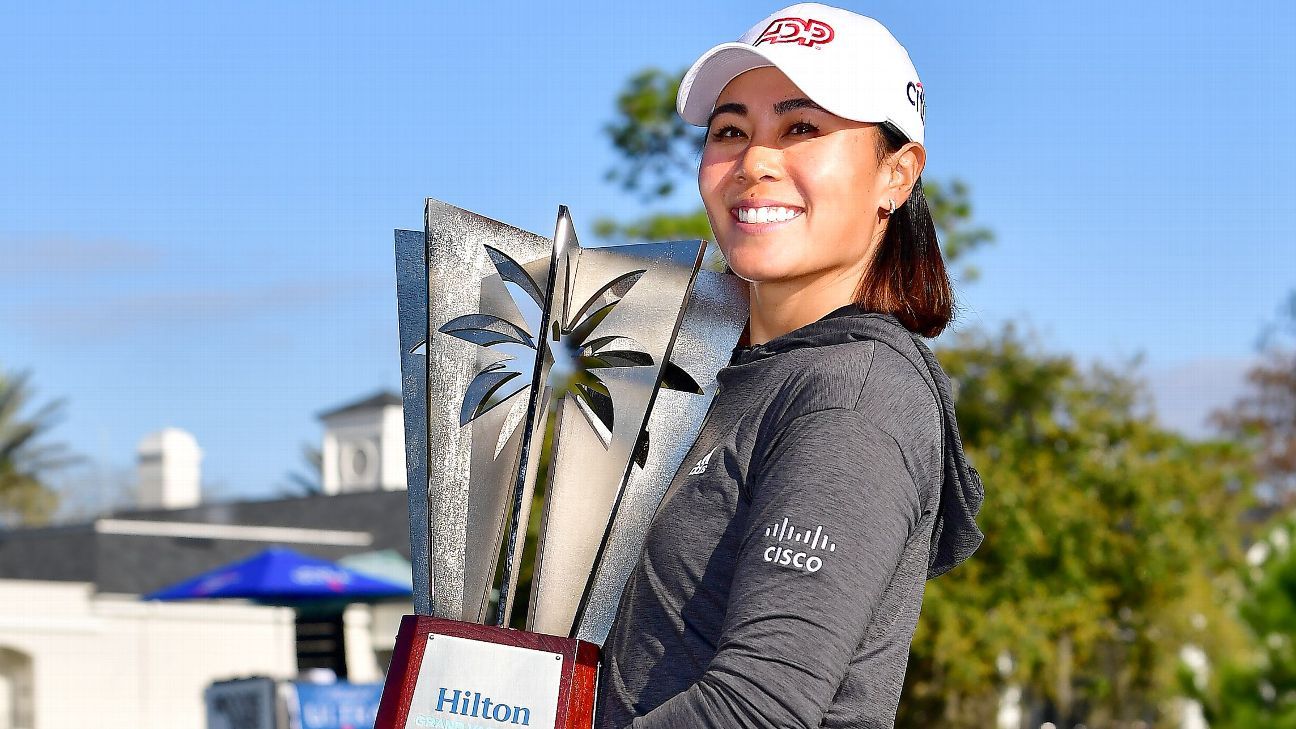 ORLANDO, Fla. — Danielle Kang readily admits she, and her golf game, remain a constant work in progress. She spent much of the offseason finding a way to be “comfortable being uncomfortable.” It seems to be working.

On a difficult championship test at Lake Nona Golf and Country Club, Kang ran off five birdies in a seven-hole stretch in the middle of her round, posted the low score Sunday at 4-under 68 and sprinted away to a 3-shot victory at the season-opening Hilton Grand Vacations Tournament of Champions.

“My mental game was really good,” said Kang, who was winless in 2021 after having won in each of her previous four LPGA seasons. “I had a really good attitude all day today and yesterday. I know I left some putts out there, but I never let it get to me, and I kept having to give myself birdie chances as much as possible.”

Kang was the lone player to break 70 on both weekend days (69-68), and the only player to shoot in the 60s all four rounds. The 29-year-old American now has six LPGA titles.

In her only previous visit to Lake Nona, Kang missed the cut at the Gainbridge LPGA last year. But when asked about it during this tournament, Kang said she had no recollection.

On a blustery, cool Florida day that made birdies scarce and scoring difficult, Kang poured in more than her share, making six birdies. She took control of the tournament early on the back nine with three consecutive birdies starting at the par-3 13th.

A highlight of the round was a hard-earned bogey at the 393-yard 16th, where Kang pulled her approach nearly into a penalty area and had to play away from the hole on a difficult bunker shot. She then two-putted from about 90 feet, converting a bogey putt from 10 feet.

Gaby Lopez, one of three players to hold the lead Sunday, experienced an up-and-down day, cooling after a hot front nine to finish third, 4 shots behind Kang. She played her way into the lead with three consecutive birdies starting at the fifth hole, but couldn’t keep up the pace and ended up with a 72.

Playing alongside Nelly Korda and Annika Sorenstam — one a current No. 1, one a former and 72-time LPGA champion — Lopez found the experience to be valuable and educational.

“Starting Sunday with the world No. 1 and Annika? It’s exactly where I want to be,” she said.

Korda, who took a 1-shot lead into Sunday, shot 75 and slid to a tie for fourth. Korda did not make her first birdie of the round until the 15th hole. It certainly wasn’t a continuation of her first 54 holes, when Korda made 16 birdies and an eagle.

“Overall, you know, I didn’t play very good,” Korda said, “but I’m going to take some positives away from this week, and hopefully I can kind of take it into the next two.”

She plans to play the LPGA’s first three events in Florida, then take six weeks off, creating her own offseason after a long and highly successful 2021 campaign.

She didn’t have to look far to find the LPGA record-holder for consecutive rounds in the 60s: Sorenstam, who once put together 14 in a row, was in her group, vying against former MLB pitcher Derek Lowe for the title in the celebrity division.

Lowe and Sorenstam would go to extra holes to decide a celebrity winner, with Lowe shocking the World Golf Hall of Famer when he rolled in a 25-footer for birdie on the first extra hole, the par-4 18th. Sorenstam had a putt just inside Lowe’s but when the ball failed to drop, victory was his.

“I basically beat her on one hole,” Lowe said. He had someplace to be. “See you at the bar.”

How would a scratch golfer fare against LPGA pros? Now we know: not well.

Hudson Swafford, behind a nine-birdie final round, wins American Express